Caught in a tangle of lies, Calla Jacobs must sort through the truth to discover where she truly belongs. A biologist for Planet Core, she finds herself ensnared in a web of deceit. Sent to Airondelle, she must work with a team to prepare the newly discovered planet for colonists from Earth. But the mission does not go as she expected. Her former lover, Erik Edwards, shuns her, sending Calla into the arms of Melina Holloway, their commander, for the attention she craves and more. A confrontation among the trio leaves her with a broken heart, and fleeing from the two people she trusted most. Attempting to break free from the lies that bind her, she discovers Planet Core has deceived everyone. And when she returns to Earth, Calla learns just how far Planet Core’s control reaches.

More From The Underground

Pulling the camera from her backpack, Calla considered what might have happened if she’d remained in Holloway’s tent. Would they have kissed? Her stomach fluttered and dampness spread between her legs as she thought about Melina’s soft lips.

Wait! She wasn’t attracted to women, never had been before. Then why couldn’t she stop thinking about what Holloway’s lips would feel like on hers and all over her body?

She took a deep breath. Sexual relations of any kind are forbidden during the missions. While repeating those words over and over, she spotted a perfect place to set up for her study—a large crancait bush on the edge of the field where the rapat fed. The bright red berries decorated the bush in stark contrast to its deep-green, oval-shaped foliage. She crept through the waist-high vegetation, trying to make as little noise as possible. Although the foreign planet had not been shaped by an ice age like Earth, it did boast fields all the way to the horizon similar to the prairies where she and Erik had grown up. Erik should be the one she thought about kissing, not Melina, not a woman. She knew everything about him, or once had. But Erik had turned into an asshole, and Melina wanted to be friends. Maybe more? Her body warmed at the thought. 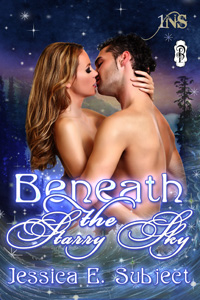 Beneath the Starry Sky
Jessica E. Subject
In Shelf
$3.99