Rebels, former Planet Core employees, have banded together in The Underground. They fight against the policies of the corporation that owns the lease on their lives. They will have their freedom or they will die trying. The rebellion is stirring… Will Garrison leads the fight against the control of the corporation—he wants his people to have their rights to live and love back. Reunited with his lover, former Planet Core medic Tim Harris, the men disagree on how to take down the corporation. And the desire for freedom… Tim’s plan requires that he provide a distraction while Will leads The Underground’s forces in a lightning raid, but who can Will trust when he's already been betrayed once? May cost these men everything… Timing is everything, because if either fails The Underground may be crushed under the weight of Planet Core once and for all.

...I really enjoyed this installment to the series. I was happy to see the characters from the previous books in this story. I loved the loyalty and trust between all of them. Even though this story was short I never felt like I was missing anything. There was a twist that I wasn't prepared for, and a ending that was completely unexpected. Everything you could want in a story, and I loved it! ~Tawania Etheridge/Reviewer

More From The Underground

“Let’s do this.” Gun aimed to shoot, Will took a deep breath and stepped inside the portal. The mass pulled his skin in every direction. His stomach churned. And then the sensations ended.

He’d made it. Resting his hand on the closest structure, he inhaled sharply, trying to gain his bearings.

The rest of the team gathered beside him, Brook and Melina the only two not affected by the trip.

“Shit.” He needed to focus, regain control. He blinked hard then glanced around the transporter room. Empty. No one had come to meet them.

“Something’s wrong,” Melina whispered, ready to fire her own weapon. “There is always at least one guard in here.”

“I guess we got lucky.” Dale sauntered to the center of the space, raised his arms and spun in a circle. “We are all alone in here. Time to find the fucker and take him down.”

A sudden hiss silenced him. Red light burned his clothing and left a clean, cauterized hole through his chest. His eyes rolled back in his head, and he fell to the ground.

Will rushed in front of the others, shoving them behind the portal.

So much for being alone. How many waited to take them down? He peeked around the structure, weapon at the ready. No one. The guards had to be hiding, waiting for him and his crew to come out.

And come out they would, fighting all the way. 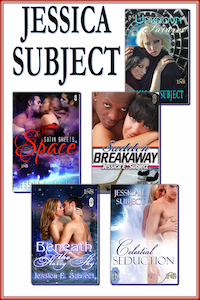