A new highly addictive and extremely dangerous drug has come from the outlying words to Terra. In a fight for control of this lethal substance, some innocent citizens are killed. One is the child of a wealthy influential bureaucrat. Galactic P.I. Majestic Kane is hired for one simple task, find the source and destroy it no matter what it takes, before more innocent people die. 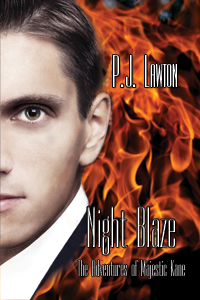 Citizen of Law Woods only kept him waiting about fifteen minutes. He took that to mean she wanted his services badly. She told him about the explosion at the motel out at the edge of Worktown, which happened while he was visiting Sandy and their daughter. She explained how one of the fatalities was the sixteen-year-old daughter of a local Assemblyman, Woods’s personal friend and client.

Mister Assemblyman wasn’t happy with the police investigation, and was seeking outside help. In a nutshell, he wanted to find the scum who’d commissioned the vermin, drug-making scum who killed his little girl, and make them pay. Kane couldn’t blame him. Had it been his daughter, he would have felt exactly the same way.

Woods told Kane she and Mister Assemblyman believed there were more labs around, since the supply of Blaze was unaffected. She handed Kane a letter the Assemblyman had written, outlining what he wanted from Kane.

Through the grapevine, the Assemblyman heard rumors that a, Vincent Carbelli was the kingpin that controlled most of the making and distribution of Blaze in and around Terra. The Lab that exploded was not one of his, but the word was he’d ordered its destruction. The Assemblyman wanted Kane to investigate the as yet unconfirmed reports. If they proved true, he was to take Carbelli out one way or another.

COL Woods retrieved the letter and replaced it in the file. Kane supposed she was being cautious and wanted to make sure her client was protected, just in case. Should something happen that was not this side of legal, the letter of instruction was protected under lawyer-client privilege and would be destroyed forthwith. Kane made one of his snap decisions. Hell, I’m game.

Kane drained his glass of fizzy water and left the office of Ms. Woods with a smug grin on his face, patting the pocket with the five thousand credit retainer draft in it. He promised to do everything he could to ensure those responsible for the young girl’s death would pay dearly for it.

Well, he had his case. Now it was time to get to work on it.