When “Lucky” Luke Ray, a cocky young American pilot volunteers to fly for the French in World War I, he has no idea what’s ahead for him. Soon he’s in England, under orders from the British Spy Master to rescue Nurse Cavell in German-occupied Belgium, where she’s on trial for being a spy. At least he believes that’s his mission until treachery in his own ranks puts him in deadly danger. Which one is responsible? The woman he wants? The man he mistrusts? Or has he been set up from the start? Unless he’s more lucky than he’s ever been, he’ll soon be facing a Boche firing squad... 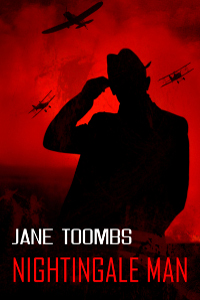 Luke strode away, passed between stone pillars at the entrance to the cemetery and headed down the hill. Sensing movement in the distance, he looked past the ruined church to the woods on the far side of the village. Soldiers in gray-green uniforms, pickelhaubes, and spiked helmets, trotted from the trees into the field. Huns. A squad of Huns.

Crouching, Luke ran, keeping the church’s remaining walls between him and the approaching soldiers. From the cemetery he heard the crackle of the blazing Nieuport. Flames and smoke rose like a beacon. With luck they’d think it was his pyre.

The church’s rear door gaped open. Unholstering his Colt, he entered cautiously, his gaze darting over the confusion of charred beams and shattered stone from the collapsed wall. Unable to spot a decent hiding place, he climbed across a fallen timber and dropped to one knee behind a pile of rubble. Sunlight glinted red from a triangle of crimson in the broken stained-glass window beside him.

Front door closed. Rear open. He weighed the Colt in his hand. Time passed. A German shouted commands from the direction of the burning plane. Luke hoped they’d think he jumped to his death before it crashed. No such luck.

He tightened his grip on the revolver. If they searched they’d find him. The only question was how many he’d take with him. He had five rounds in the Colt, another six in his belt. Most airmen downed behind German lines surrendered. The hell with that.