Eighteen-year-old Emily Preston has it all. She’s beautiful, strong, and confident. But just weeks before graduating from high school, the nightmares she’d experienced as a child begin to plague her once more. When a mysterious voice warns that she must remember her past and accept her gift of seeing into the future in order to save her boyfriend’s life, she believes she’s losing her mind. The nightmares escalate into visions of long ago and memories begin to return. Will Emily allow herself to accept the gift or will she lose everything, including her life. 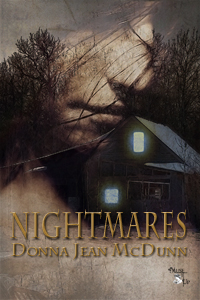 Outside, Emily shivered. A short, black strapless prom dress doesn’t offer much protection against the cold wind, no matter how good it looks on you.

Her boyfriend slipped behind her, wrapping her in his arms, blocking the wind. The heat from his body was warming.

“Have I told you how great you look?” he whispered in her ear.

Emily giggled and turned in his arms to look into his blue eyes. “No, why haven’t you?”

His hold tightened and he pulled her closer. “Because I wanted to do this first.” He kissed her.

She grinned. “You clean up pretty good, too. I almost didn’t recognize you without all the grease and oil from that car.”

Tony laughed and reclaimed her hand. “Come on. You’re freezing. Let’s go sit in that car so we can talk.”

Emily giggled. “You know I’d follow you anywhere, but could you slow down a little? These shoes are new and I’m not used to walking in heels.”

Tony dropped her hand and put his arm around her. “Oh, sorry, I forgot.”

For the moment, with his arm around her, she felt warm and protected, until she remembered why they had come outside. Tony wanted answers. From the determined look on his face, she knew he wouldn’t settle for anything less. But could he handle the truth? Did she even know the truth?

She remembered having nightmares about a thunderstorm as a child. Her mother had told her scary nightmares were part of childhood. She said they’d go away when Emily got older and they had. So why terrorize her now, night after night, just like when she was little?

The nightmares were frightening enough, but the voice warning her of danger terrorized her. What she really wanted to do was run away and hide, but she couldn’t, not if Tony was in danger, too.

“Remember your past,” the voice had said, “so you can save Tony and yourself.”

She could tell him about the nightmares, but anything more and he’d think she was a paranoid schizophrenic. Maybe he’d be right. What was wrong with her? From her earliest childhood memories, she planned to be a normal girl with ordinary problems. She couldn’t explain anything to Tony; not before she put her life back together.

The lights in the parking lot glistened off Tony’s black 1966 Chevelle Malibu. She didn’t need to ask him if he’d spent the entire afternoon cleaning and polishing it. Of course, he’d say he did it all just for her, but she knew better. Tony practically worshiped everything motorized, but the Malibu was special to him. His dad bought it and planned to restore it with the help of his two young sons but was killed in a car accident before he had the chance.

Sometimes she wondered if she should be jealous of that old car. Tonight, she was just grateful to get out of the wind.

As Tony opened the driver’s door and Emily bent down to hop in the car, she caught a glimpse of a dark shape next to the bumper. She gasped and clutched Tony’s shirt. Her heart raced and the hair on her arms stood on end.

Tony wrapped his arm around her waist. “What happened? Are you hurt?”

She shook her head. “I thought I saw someone crouched down by your car. They were wearing a hooded sweatshirt.”

Tony looked around. “I don’t see anyone? Are you sure?”