Jenna, Sam and Lola were lucky to survive the horrors of a zombie-filled New Orleans. But they still have a lot to learn.

In a zombie world, you can never let your guard down. Even when you think you're safe, dangers lurk around every corner. Sometimes the dangers are from the undead, but more often they're from the living.

It's also much easier to inspire a group to fight than it is to lead them through everyday hardship. Jenna once saved lives, but the pressures managing an ever-growing group of survivors soon wears her thin.

And finally, in Undead America, no one remains unscathed. No one is whole, and almost everyone has something to hide.

From the bowels of a rundown farmhouse to the plains of Nebraska, from a leather-clad living monster to the tiniest of child zombies, there are truly No Angels. 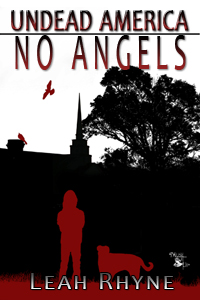 He appeared over a haystack hill moments later, lurching and stumbling, lunging towards the sounds he’d heard in the quiet prairie land. One zombie. I sighed and tightened my grip on the Slugger in my hands, preparing for battle.

Allie appeared at my shoulder, peeking over my head. Her jaw hung slack, and she covered her gaping mouth with the back of her hand. “Oh no. Oh my God, Jenna, I am so sorry. I don’t know what I was thinking. I wasn’t thinking, actually, I was just...playing. And now...oh my God now! What are we going to do?”

But then tears filled her eyes, which grew bigger as she stared over my shoulder.

Allie only shook her head.

Slowly, through the sticky molasses of a bad dream, I spun around to face the zombies.

Dozens of the creatures flowed across the grass, stumbling in packs of twos and threes to the tiny church in which we stood. But they weren’t looking for absolution.

They were looking for breakfast, and they were only minutes away.

Run! It was my first thought, but I stifled it. Instead, I stepped down to the round and walked to the corner of the church to take a peek at what was coming behind us. Allie stayed on my heels.

By my rough count, there were at least a hundred headed our way, and the gaps between them weren’t big enough for us to make an escape. We were trapped.

“Do you have the walkie-talkie?” Allie whispered.

“No, it’s sitting on the counter. I forgot it.” In reality, I’d left it behind on purpose. All my pockets were full. “I don’t have enough ammo, either. Not for this.”

We ran up the steps and inside the church, and took a look around. “Shut the door,” I said.

Allie slammed it, and I winced. More noise.

Together we dragged a heavy wooden pew across the floor, cutting deep wounds into the shining hardwood floor, and pressed it up against the door.

“The door opens out, not in,” Allie said, and I nodded.

“It’ll trip them up, create a bottleneck, I hope. At least it’s something.”

They wouldn’t only come in through the door, though. I knew that. The windows were low, so they could walk right through. “All that stained glass...” I muttered as I ran toward the altar, hoping to find something, anything, that would help.

“Never mind.” There was a podium on the altar, knocked over on its side already. It looked heavy. Maybe we could hide behind it and I could shoot them one by one as they came through the door.

But all that stained glass. It’ll never hold them. Just because the church had remained pristine for seven months didn’t mean it could survive this onslaught.

I considered fire. I had matches, and all the wood was surely flammable. It had to be.

Maybe it’ll cause a distraction and we could slip away.

But probably not without getting burned. Badly.

Beside me, Allie trembled and quaked. “What are we going to do, Jenna?”

I wanted to remind her that she was old enough to be my mom, and had been someone’s mom for a long time, but that seemed cruel. Instead, I took her hand as I continued my frantic surveying of the church. Nothing looked helpful.

We backed into a corner. We could hear them clearly now, their individual zombie-sounds tied together into a steady hum of decay. The sound of our end, I thought, and then pinched myself for giving up. There has to be a way out.

The wall behind us was covered with a drape, and I leaned into the musty-smelling velvet. I pressed myself against it, wanting to wrap up in it and hide like when I was a little girl playing in my mother’s curtains. I turned into it, pulling Allie with me, when suddenly my elbow hit something small, hard and round. A doorknob.

“Come on,” I said, yanking the curtain aside. It covered a plain wooden door, and when I turned the knob the door opened. A ladder stretched way up into the bell tower, higher than even the freshest zombie would be able to reach.

I set my Slugger down on the floor, leaning against the wall, and started to climb as fast as I could, with Allie close below me. I climbed until my arms burned and my legs started to cramp, and then I climbed some more. A hundred or so rungs up, I felt the fresh air of a warm breeze on our faces through the open windows. We’d reached the top.

The glassless windows gaped wide open, and the interior of the tower was filled with a single brass bell that smelled like a hot summer breeze. I slung my leg over the side of the nearest window so that I straddled the frame, then leaned my head out to look at the sea of zombies beneath us. They were inside the church, but for the moment we were safe.

Allie climbed into her own window and looked at me around the bell. “So now what?” she said.

I shrugged. “Not sure yet. Help maybe? Or for them to get bored and go somewhere else? We just wait.”

“Nah,” I said, wrinkling my nose. “That’ll just attract more of them. And I don’t have enough ammunition for the ones we already have down there. We have to wait.”

We sat silently for a long time, looking out at the sky, the prairie, the farmland, anywhere but directly below where certain death and zombie-dom awaited us. Then, quietly, I heard Allie singing. Amazing Grace.

T’was Grace that brought us safe thus far...and Grace will lead us home.

Grace, or Jenna, I wondered silently. But then I shrugged again and began humming along.

What else was I going to do?