Donnie Novak and Jack Sterling have known each other forever. Growing up together in a small Midwestern town, they were best friends. After high school, they both enlisted in the U.S. Navy at the same time, and somehow were assigned to the same company before being stationed on the U.S.S. Oklahoma together.

One night on leave, Donnie crosses an almost imperceptible line between friendship and something more. A stolen kiss threatens to ruin what Donnie and Jack have built up together all these years, and the next morning, he can't apologize enough.

But a squadron of Japanese bombers has their sights trained on Pearl Harbor's Battleship Row, and in the early hours of December 7, 1941, Donnie might not get a chance to set things right. 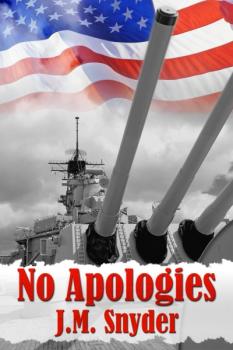 Literary Nymphs Reviews: 4 out of 5.
"This military tale is filled with so much regret, angst and hope for the future that it actually makes your heart ache reading about these two men."

Rainbow Reviews: 5 out of 5.
"The historical aspect to the story ... takes on an important role and helps bring the story alive. Despite being a very short work, No Apologies is intense and memorable. Highly recommended."

Review by Frost: 5 out of 5.
"I can't truly find words to encapsulate the power of this story. I literally cried -- and cried -- throughout ... one of the most potent stories I've ever read."

Speak Its Name: 4 out of 5.
"Well written and nicely described, from sailors in thin white cotton to the mess-deck breakfast, I was thoroughly convinced and well worth ... anyone’s money."

Inside the galley, the tables are already crowded with sailors in dungarees, their trays filled with eggs and potatoes and toast. I fake a half-hearted grin when Ralph waves, and Jack looks at me briefly before turning back to his food. No smile, just a naked wariness I put on his features, and I'm not hungry anymore. I just go through the motions of getting a tray and letting the cook fill it up. Jack hates me, I know it.

I sit down beside Ralph; across the table, Jack looks up at me and I have to choke back a sudden sob that burns my throat. "Hey," he says softly.

"Hey." I toy with the food on my tray, mashing the eggs with my fork and trying not to watch his jaw as he chews. "Chuck's still asleep, lazy ass."

Ralph laughs. "He's still passed out, you mean," he says, finishing off his own eggs. "You guys shouldn't drink so much. I ain't dragging you back to the ship again. Next time, I'll just leave you there. You can explain to the captain why you didn't make it back."

Jack smiles and even though it's not at me, my heart still rises to see the curve of his lips. "You wouldn't do that."

He's right -- Ralph isn't the type to leave his friends. He's threatened it before but always gets us back safe.

"Just watch me," Ralph warns. "You never know. Just you wait and see."

An uneasy silence falls around us, despite the talk at other tables. I manage to get a forkful of eggs into my mouth, but they taste soggy and bland and it's all I can do to swallow them down. I want to tell Jack I'm sorry again, I want to apologize until he has to forgive me, he just has to, but I don't want to say anything with Ralph right here because then he'll want to know what I'm sorry for, and I know Jack wouldn't want me to say. I'm sure he'd just rather forget, or pretend the whole thing never happened, and I wonder if he still tastes my lips on his. I want to ask him that, I want to know ...

I grimace at my tray and don't know how I'm going to finish this food -- I don't feel like eating now. From across the table, Jack glances at me with a slight frown on his face, a worried look that silences me. Don't tell, that look says.

When I don't answer him, Ralph adds, "You look like you just lost your best friend. And you're on leave, boy. Cheer the hell up, already."

Well, Ralph, I want to say, I did lose my best friend. For one little kiss, I threw everything we had away.

What the hell was I thinking? I wasn't that drunk, I wasn't.

His One True Love
Shannon Pearce
In Shelf
$1.75