No Regrets, No Surrender

At the end of their night of frenzied passion, Jazz Winters walked away from the only two men who’d ever made her feel like a woman. Logan Cavanaugh and Zach Evans let her go, but only if she swore all her future leaves to them. For fourteen, excruciatingly long months, they’ve waited for her, visiting when they could, but the demands of Mike’s Place only let them go one at a time. Jazz’s fear that a ménage can’t last a lifetime is founded in her very middle-class, middle-American upbringing. The stress of years of military service in hot zones, combined with life-threatening injuries, pushes her to the edge. When she comes home, she’s the wounded warrior, not the woman she thinks they want. But Zach and Logan are right there to help her, even when she resists. She’s not alone. And whether she chooses one man or both, they have no regrets and they won’t surrender.

No Regrets, No Surrender

Heat Rating: Scorching
Word Count: 43,000
4 Ratings (4.3)
Anthology Contemporary Menage a Trois/Quatre
In Bookshelf
In Cart
In Wish List
Available formats
HTML
Mobi
ePub
PDF
Cover Art by Mina Carter
Reviews
Picking up about a year after ‘Retreat Hell! She Just Got Here (Always a Marine #2)’, Jasmine Winters, Logan Cavanaugh and Zach Evans return with a longer look at how their happily ever after happens. When I saw this story I was pleasantly surprised to see that it was significantly longer than the others that I read in the series.

Logan and Zach have patiently waited for Jazz’s return. They’ve met her at a couple overseas locations where she was able to meet them. At this point, my big questions were – how would this ménage work if Logan and Zach are having exclusively individual relationships with Jazz? I mean how would it work when they’re all living in the same household if a pattern of two and not three had been practiced.

I gotta tell ya folks, I don’t know Long’s background with the military or if she’s just done a ton of research but she’ll make a you cry like a two year old throwing a tantrum. When Jazz has to come back from her assignment after an IED explosion I had no clue how I would handle it and folks I didn’t handle it well. When Jazz meets the guys at the airport and she’s in uniform in a wheelchair with her escorts, I had to take a break, go get a glass of water and a box of tissues. I could go on about how war is hell but we all know that and that’s not what this story is about. Instead it’s about Jazz letting Logan and Zach into her heart and letting them help her overcome her challenges.

For such a sensitive topic, it’s a relatively short read but Long gets a lot done. She doesn’t mince words with the description of the wounds and the subsequent traumas (strokes, seizures) that happen. Jazz - a marine you are - had a lot to go through to get her mind right so the body can follow and lucky girl, the good news is that Logan and Zach had her back one hundred ten percent of the way. Even in the bedroom, the dynamics had to change because of Jazz’s injuries but the way Long handled the limitations was well done.

Of the two guys Logan was the one with the physical injuries from his time in active duty, he had more than enough patience, love and support to offer Jazz. And Zach, oh my, what a man - he was my favorite. He doesn’t have the physical restrictions that Jazz or Logan have and I think that put him on the back burner more than he should be but when he feels the need to express himself he does it quite well. Oorah!

If there was a way to have a prequel for Logan and Zach’s story I would love to read that. But that would be hard to do because these guys are straight and that really wouldn’t make for fun reading or would it -- never say never.

“When’s her next leave?” They should really change the subject, but like a dog with a bone, the need to hold on to her intensified. They talked with her nearly every other day, every day when she managed it. Sometimes for five minutes and sometimes an hour, depending on how much time she had.

But with no phone call in forty-eight hours, his gut churned with worry. He tried to keep a lid on it, but it boiled into everything he did. The tension in his neck wouldn’t go away nor would the nagging sense of worry.

His phone buzzed in his back pocket, and he waved Logan over. The number in the caller ID flashed familiar, and he thumbed it on to answer.

“Yo, Brody!” Lieutenant Brody Essex, the last member of their unit and one of the Captain’s good friends, still served in the sandbox. A reassignment had sent his unit to Afghanistan two hundred clicks from Jazz. He’d checked in on her now and then to give Zach the news that yes, she was fine. “How goes the south side of hell?”

“Hot and crispy.” The man’s voice was tinny, echoing the distance between the calls. “Look, man, we just got word. The FET unit hit an IED in Bamyan. At least one serious injury. I don’t know if it’s her….”

The late afternoon sun turned icy cold. He froze, the sound of his heart like a ticking time bomb in his head.

“Zach?” Logan braced him with an arm.

“IED, Bamyan. A FET team was hit.” He forced the words past the chokehold on his throat. The Marine inside him stood solid. Details first. Reaction later.

“I don’t have any more details, but the news is going to hit stateside any minute. There were reporters there with one of the Army units. We’re on our way now. Hang in there, buddy.”

“Is it her?” Logan asked, the words a low growl.

“He didn’t know. But she’s in the field. She never says where she’s going. Security.” The words popped out, one at a time, like bullets being emptied from a clip. “She didn’t call last night.”

“Don’t lose it.” Logan’s hand tightened on his shoulder. “We don’t know anything yet.”

Zach stared at his phone, willing her to call. 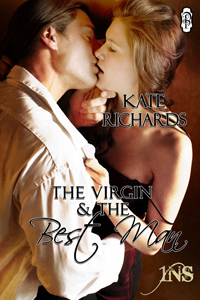 The Virgin and the Best Man
Kate Richards
In Shelf
$2.99 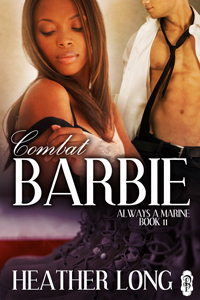