Not According to Plan (MM)

Jonathan Banks and Peter Giles have worked together for five years, business partners in a planning firm that bears both their names. From the moment Jonathan was hired, the attraction between the two men was instantaneous and mutual, but he was dating someone else at the time and turned down Peter’s advances.

Now Jonathan’s boyfriend is out of the picture, and he’d love nothing more than for Peter to ask him out again, but he knows his partner all too well. Peter doesn’t take rejection easily. He likes flirting with Jonathan, sure, but doesn’t want to take the chance of getting turned down a second time. He's satisfied with the way their friendship is, and fears anything more intimate might ruin what they already have.

But everything both men have planned and worked for together is threatened on a cold, wintry evening when Peter’s car won’t start and Jonathan has to give him a lift home. Can the two friends move past their own fears and trepidations, and begin to build a future together as partners outside the office? 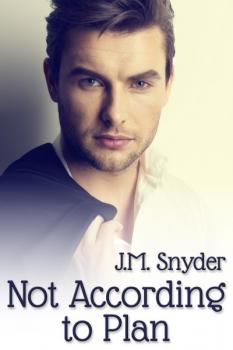 Not According to Plan (MM)

In the other office, the phone slammed down in its cradle, punctuated with another, “Fuck.”

Drawing in a deep breath to steel himself -- there went any chance he might have had to unwind tonight -- Jonathan called out, “That you, Pete?”

He heard a chair scrape across the floor, a desk drawer open and shut, then hard-soled shoes on the thin carpet as Pete came over to stand in his open doorway. “Who the hell else would it be?” Pete snapped.

With a grimace, Jonathan asked, “Bite my head off, will you? All I did was ask a simple question. What’s wrong?”

Pete sighed lustily, obviously perturbed. Without waiting for an invitation, he came into Jonathan’s office and plopped down into one of the two chairs situated in front of Jonathan’s desk. Crossing his ankle over his knee, he leaned back and glared at the ceiling as he steepled his fingers in front of him. “Fucking car won’t start, that’s what’s wrong.”

“Do you need a jump?” Jonathan knew shit all about cars, but he had a set of jumper cables in his trunk that were a free gift for opening his bank account back in the day; he’d selected them from all the other options because he thought they might come in handy someday. His reasoning? If he ever really did need them, hopefully the owner of the other car would know how to use them. “I have a set of cables. I’m parked near you in the deck.”

But Pete shook his head. “I think it’s the alternator. Damn piece of shit.”

“I don’t even know what that means,” Jonathan admitted.

Pete gave him a strange look. “It means it’s worthless and needs to be replaced.”

“No, I --” Jonathan laughed. “Never mind. So you need what, a new one, or something? Can’t you just go to Walmart and get one?”

Pete rolled his eyes and leaned his head on the back, slipping down further into the chair. “God, I wish. Of course, my mechanic closed at six, which it’s just barely that now, but when I called he was all like, I’ll be by tomorrow to get it, no problem. Yes, problem! How the hell am I supposed to get home?”

Behind Jonathan, his office windows overlooked Richmond’s busy Broad Street; one was slightly opened to let in a little air, and through it he could hear the hissing brakes of the city bus as it stopped at the corner just outside their building. But heaven forbid he suggest Peter Giles ride the Greater Richmond Transit, even if the man’s Lexus was sitting undrivable in the parking deck. Pete would most likely have the heart attack everyone thought he was heading for, given his temper.

A glance at his computer screen showed nothing that couldn’t wait until the morning. Jonathan sighed, knowing the only reason Pete was still hanging around the office was because he was looking for a ride. Not that Jonathan minded; they were friends. And Lord knew Pete was easy on the eyes, with his rugged jaw and a head full of wavy chestnut hair, and deep blue eyes so dark, they almost looked black in certain light. When Jonathan first met Pete years ago, he’d been drawn to the magnetism in those eyes, the intelligence and light and, admit it, the raw sensuality shining bright in that stormy gaze. Pete’s strong grip had been incredibly sexy, as well, as was his aggressive confidence throughout their interview. If only Jonathan had been single at the time ...

I’m single now, he thought, studying his old friend openly as Pete stared at the ceiling and waited for him to extend the offer of a ride home. Pete wouldn’t ask -- he wasn’t the type. He expected others to step up to the plate for him, which was probably why they usually did.

Jonathan shook his head, bemused. If I don’t say anything, we’ll sit here all night.

Finally, before the silence stretching between them could become too awkward, Jonathan said, “You know, I’m just about finished up here anyway. I can drop you off if you want to ride home with me.”

A slow grin spread across Pete’s face, lighting up his already handsome features. “Hey, only if you’re heading out that way.”

He wasn’t, not by a longshot, and Pete knew that. But Jonathan stood and reached for his coat. “For you? I can take the scenic route home.”

Pete clapped his hands onto the arms of the chair. “Let me treat you to dinner, at least. I was going to stop at the RVA Ale House for a burger and a beer. If you’re up for it ... what do you say?”

The only thing Jonathan had at home was a freezer full of frozen entrees, none of which he really wanted to eat, anyway. They could wait another day. “That sounds great.”

“Let me get my things,” Pete said, heading back to his own office. “It’s a date.”

Only Jonathan knew it wasn’t, not really.