When eighteen-year-old Aubrey Dale’s cousin is diagnosed with leukemia, Aubrey volunteers to in-vitro fertilization in order to become a vessel for the donor that will save her life. Now this clean-cut high school student must learn to adapt to life as a pregnant teenager, despite still being a virgin.

Things only get more complicated when she falls in love with her best friend, Eli Calhoun, who has just returned from the penitentiary. Rumors soon spread that the insemination story is only a cover up. That’s when the anonymous threats begin. Someone in her small town disapproves of this so-called abomination.

The psychological games soon take a twisted turn, putting Aubrey and her unborn child’s lives in danger. Aubrey and Eli race to uncover the horrible truth before it destroys everything. 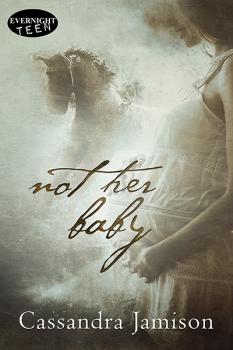 Dammit! I shot a glance around the empty farmland. What choices did I really have here? Take my chances in that broken-in house or wait outside—alone, in the open—in the wet darkness? A shiver shot up my spine, shoving me in after him.

From the very little light the Jeep offered outside, I could already see that the living room was trashed. It was like some kind of tornado had hit. What was odd though was that the big things were still in place—his TV and guitar, for instance. That’s because they weren’t here to rob him. So why had they come? Were they still there now?

“Thought I told you to wait in the car!”

I let out an airy squawk at Eli coming up behind me. He rolled his eyes at my stubbornness, which I just barely caught in the light before he turned back around.

I spun up behind him, peaking over to where he was staring. It was the wall between the living room and kitchen. It seemed fine: poster, clock, and mirror still intact. What did he see?! Then I spotted it, something that hadn’t been there before. It was a doll. Not a baby doll though; it was bigger than that. It reminded me of the kind I had when I was a little girl—one of those three foot tall life-like babies that you could make walk with you when strapped to your shoes. But it wasn’t a ballerina or princess. This one had on loose clothing with frills around the ankles, wrists, and neck. The face was obscured by the shadow of a pointed droopy hat. Some kind of jester, maybe.

I ripped out my phone and broke the darkness with its flashlight. White porcelain skin and immense burgundy lips greeted me. No, it was a clown. Its eyes were shiny and vacant, but that wasn’t what frightened me. It was what sat behind it, smeared in red across the wall.

The sound of something shifting in the house made me jump and I lost my grip, forcing us back into the shadows. I fumbled on the floor to find the phone.

Come on! Standing face-to-face with a message from a clown doll is not the time for clumsy fingers. This was where urban legends got started. We needed light. I finally got it back in my hand and clicked the button.

Shining it on the wall was just as horrifying as I thought it would be.

Written in the most gruesome shade of thick red paint were just four words. It was a question I’d heard once before, one that felt like a knife in my heart, a warning of some kind, a dark game.

WHO’S BABY IS THAT?

“Dammit!” I growled, thumbing to get it back on. More shuffling nearby, I half-expected something to grab us in the darkness, then I felt Eli’s urgent hand on mine. I got it back on and we both gasped, backpedaling for the door. Outside was safer. Yes, I’d take my chances there. Because whatever that possessed clown was, the toy that had once been vacant and still—it was gone now.