(Not Quite) The Same Old Song (MF)

When her brother relapses—again—and disappears with the rent money, Darcy Andrews is forced to pawn the one thing that means the most to her. Her guitar, Darlene. Suddenly the plus-size teen’s plans for a stress-free summer before senior year are washed down the drain. Now she must earn enough money to get her brother the help he needs and to buy Darlene back.

Enter Grey, the pawnshop owner’s son. Popular, annoyingly hot, and inexplicably on stage with Darlene in his hands. Not only is he playing her guitar, but he kind of sucks at it. Before she can stop herself, Darcy is offering Grey guitar lessons, adding yet another complication to her plans—a summer romance with the last boy she ever thought would be interested in her.

It’s all sex, drugs, and rock-n-roll. Except, not quite. She’s down one guitar, the drugs are her brother’s problem, and once school starts back, Darcy is afraid Grey is embarrassed to be seen with her. But when an opportunity to win money for her brother’s rehab arises, she won’t let all that stand in her way.

14+ due to sexuality, drugs, and adult situations 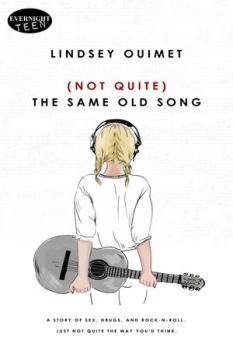 (Not Quite) The Same Old Song (MF)

I was going to kill my brother.

Yep. Kill, as in maim brutally until he succumbed to death’s cold, dark embrace. Because a slow death wouldn’t do. No, he deserved to suffer. I didn’t know much about Chinese water torture, but I could learn. And the leaky faucet in the bathroom, the one he’d promised to fix months ago, would do the trick. A couple of hours of that would surely drive him insane. His brain might even start to liquefy. Maybe dribble out of his ears a bit.

I wondered if that would be painful enough. Or painful at all, considering he’d killed most of his brain cells already, taking hit after hit of whatever his crackhead friends put in front of him.

I hoped wherever he was at that moment, whatever he was smoking was laced with some bad shit. I didn’t even feel bad thinking it. This always happened. He’d disappear, lifting cash from Mom’s purse and leaving her sick with worry instead of anger. One day turned into two, three, eight at the most. He’d stumble in eventually, visibly worse for the wear, but with a sheepish I’m sorry, Mommy. I’m sorry, Darcy. I promise I’ll be better from now on smile plastered on his face. And then he’d do it all over again a couple of months later.

Eventually, he’d fall back off the wagon. He’d get picked up in the alleyway behind a bar or hanging out at one of the other trailer parks in town, the ones far worse than our own. He’d spend time in the county jail but would never be dumb enough to call us from it asking for bail. He knew we wouldn’t have it. Mostly because he’d pocketed what we did have to score whatever shit landed him there in the first place, but also because … well, the residents of Whispering Oaks Mobile Home Community weren’t exactly rolling in dough in the first place. And even though Mom had started doing clients’ hair in our poorly lit kitchen on the side, we were barely getting by.

Really, he was no worse off than half of our meth-addicted town, but it was bad enough to make Mom cry at night when she thought I couldn’t hear her. Our trailer walls were paper thin though, and I hadn’t slept soundly since I was thirteen and woke up to find one of my brother’s acquaintances rifling through my dresser drawers at three AM. Junkies were the goddamned worst.

Beating the snot out of him always crossed my mind. I’d tighten my fists at my sides when he inevitably made his reappearance, or when I’d find him sitting at the kitchen table in the mornings before I left for school, smiling nervously as he pushed a plate of apology pancakes—dusted with powdered sugar the way I liked—in my direction.

Whatever apology he offered this time, though, it was going to have to be good. And it damned well needed to mean something.

The guitar case slipped in my sweat-slicked hands and I nearly lost my hold on it as I pushed through the heavy glass door, the bell jingling to signal my entrance to Addams Gold & Pawn. My fingers tightened around the handle of the battered and beaten-to-hell case. The leather was cracked, torn, and covered in stickers from dozens of different bands—some long-forgotten, others legendary. And it held my favorite thing in the world. When I was little, my father let me have the honor of opening this case for him each time he played the guitar inside it. Later, he taught me how to play it myself. Letting it go, even temporarily, was going to hurt like a bitch.

I straightened my shoulders and walked to the front counter.

This time… Well, this time I really was going to kill my brother.