Always ready for adventure, Amy and Susan, friends and neighbors in an idyllic university town, find more mayhem than they bargained for.

While scouring the sky for flying saucers, Amy and Susan find a naked man, unresponsive, on the grounds of the museum/asylum. So begins the trouble. As the women delve into the bohemian art scene at Foothills, they end up haplessly trying to solve the mystery of the bodies that seem to appear wherever they are. Soon, not only their friendship, but also their reputations and lives are at stake. Still, their zany spirit prevails despite pratfalls and miscalculations. This quirky mystery is as humorous as it is intriguing. The tortured corridors of the museum are nothing compared to the strange art and artists who inhabit this world. 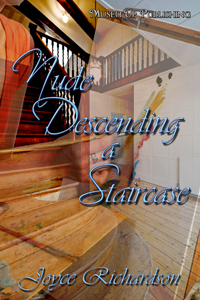 I took a sip. Sweet was right. “Amy, I’ve got something to tell you.” I picked up one of the big sit-upon-pillows (red, this time) and held it tightly over my body. This time I was the one blushing. “Amy, I’ve been using one of the studios.”

She frowned. “But I assumed you didn’t get the fellowship. You didn’t tell me in so many words, but Donovan said the winners had already been notified.”

“And the losers too.”

“Poor Suz!” Amy reached over to hug me. “I know how much you wanted the fellowship. I guess I somehow knew you hadn’t gotten it, but so much was going on I didn’t think about it.”

“Yep!” I agreed. “A lot’s been going on, all right. But, please, you’ve got to promise you won’t tell anyone about the studio.”

“I don’t understand. How can you use one of the studios? They’re assigned to the fellowship recipients.”

I gulped my grapefruit juice and, sweet though it was, it was still acidic enough to choke me. “You know how I am, always pushing boundaries. But no one’s been there,” I coughed. “I’ve been painting there for awhile and haven’t seen a soul.”

“Maybe the other artists work at night.”

“That’s what I think. Or maybe they teach at the university or take classes and can only use their studios after business hours. Or maybe some of the artists don’t use their studios much at all and just applied for fellowships for the money and prestige.” I was surprised I sounded so bitter.

“You haven’t seen anyone?” Amy frowned.

“I heard someone. I use the same studio every time and clean up after myself when I’m finished. And if anyone else is using that studio they do the same, because it’s in spotless condition when I arrive each time. Anyhow, the last time I was there I heard footsteps and a funny sound two studios over, sort of a metal on metal sound, as if the person were pushing something, then drilling, and finally pounding. I froze in my tracks, Amy. I felt like my blood was freezing, I was so afraid the person would discover me.”

“So you didn’t whistle a happy tune?”

I laughed, choking once more on the grapefruit juice. “I didn’t even swear!”

“Not even ‘fiddlefuck’?” Amy laughed so hard, some grapefruit juice came out her nose.

This was exactly the tone I wanted. Stealing a studio? What was so wrong with that?

“And?” she asked when she recovered.

“And…I kept on painting. I didn’t know what else to do.”

“And then?” Amy was neither choking nor smiling. I wished I had something more dramatic to tell her.

“I heard footsteps and the sound of the elevator. Only then did I start breathing normally again. I walked over to the newly-vacated studio...” I paused, relishing the drama I had created, “and that’s when I saw it.”

“A toilet of some kind. Only it was pink on the inside and wavy instead of symmetrical, like a Dali clock.”

“Could have been one of the ceramicists, but I thought they had their own studios in the fine arts building.”

“You’d think,” I said. “It could be anybody. The fellowship competition was open to the general public.” I had an idea. “Amy, is there any way you could get the names of the winners?”

My friend mused. “Maybe…” she said, although her tone was not convincing. “It’s just that Donovan and I never talk about work stuff.”

“Safe, as in not being discovered.”

“I guess not,” I admitted. “I would just feel so extremely embarrassed.”

“Think of a cover story.”

“You could use the private-eye cover,” Amy smiled, and I was happy she was so playful again.

“Like, I’m investigating the murder of Mario.” This sounded good to me for a moment. Then the truth dawned. “But what if the person I’m telling this to is the honest-to-God Mario murderer?”
“Then your days are numbered,” Amy said, somewhat facetiously. She looked me right in the eye. “Suz,” she said, the tone of her voice rising and falling, “we’re not playing anymore, are we?”