Blake Kaplan has been playing fantasy football with his old college buddies for years. He’s never managed to win, mostly because he’s never wanted to subject himself to the bets and pranks the other guys endure for a chance at glory. But this year, Blake is willing to do whatever it takes to get the first pick in the draft, even if it means sacrificing his dignity.

To win, Blake’s wager involves the one thing he’s worse at than fantasy football: dating. All Blake has to do is survive a few dates with the gorgeous Landon O’Keefe, the bartender at the league’s favorite watering hole, and he’ll get the pick in the draft he wants and the chance to win. It sounds easy enough, except for one thing. He can’t sleep with Landon without losing the bet. But, will being with Landon make him lose his heart instead? 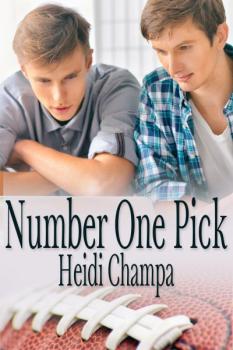 “I thought we were supposed to make out after dinner, Landon.”

He laughed against my skin, the vibrations sending a tickle down my body.

“What can I say? With you, doing things out of order seems to make more sense. We can wait, if you want.”

He claimed my mouth, taking away the witty response I had prepared. My hands stole under the thin fabric of his t-shirt, his skin of his back so hot under my fingertips. I felt him shiver as I traced the line of his spine, his tongue urging deeper into my mouth, our stifled moans filling the otherwise silent room. He reached down and started yanking my shirt up, breaking our kiss long enough to get what he wanted.

I obliged him and threw the shirt onto the floor before I made quick work of his. Staring up at his decorated skin, I ran my hands over the designs and patterns, letting my thumbs strafe his metal adorned nipples. As I teased him, he gave a sharp intake of breath and let his eyes fall closed.

I seemed to shock him when I rolled us over, his body squirming under me as I kissed over the inked skin of his chest. Landon ran his fingers through my hair and gently pulled me towards his nipple. I didn’t give in right away and took my time tracing my tongue over the intricate piece of art right above the pierced nub. He became more insistent and I relented, closing my lips around his nipple and flicking it with my tongue. He arched underneath me, the intensity of his response made my cock harden with lust. I moved to his other nipple, repeating the same thing he seemed to enjoy so much. His moaning sounded so sweet, I would have given anything to keep him in that moment for as long as possible. But, Landon seemed to have other plans.

He brought my face back up to his, our lips locking with abandon as he rolled back to the dominant position.

“You should get it done, Blake.”

“Needles not your thing?”

“You could say that.”

He smiled down at me and pinched my nipple hard enough to make me jump.

“Just checking. It’s official. You’re too much of a wuss to handle the real thing.”

“Maybe I should check one more thing, Blake.”

He lowered and kissed a meandering path until he captured my nipple with his lips. Soon, he replaced the gentle suction with the sharp nip of his teeth followed by the soothing lave of his tongue. I cried out as he did it all again, the sting of pain mixing with the sweet pleasure like the perfect drinks he served at the bar. I would have given anything to be able to tear the rest of his clothes off and forget all about dinner, but the bet and the rules crept into my mind at that moment. As much as it killed me to do it, I tried to get Landon to stop. He looked at me, concern in his eyes.

“I can’t believe I’m going to say this, but we should stop.”

“It’s against the rules, remember?”

“I thought the rules said no sex.”

“There are other things we can do, you know.”

“I know. But, maybe we should make dinner.”

He smiled before he kissed me, crushing my resolve in a few delicious moments. His hand dropped to my cock, straining against my jeans, aching for him to touch me. But, that was against the rules. I’d made Vince give me more specifics after I made the bet and he’d settle on “no touching each other’s junk” as a good parameter. That bastard.

“God, why did you have to suggest the no sex rule?”