When Richard is invited to join Colin for Christmas in Cancun, he’s on the next flight out of Winnipeg faster than you can say Feliz Navidad. He’ll take sun and sand over shoveling snow any day, but more importantly, he believes the invitation as an obvious sign Colin has at last chosen him over his rival Joaquin. Now they can get on with the business of being a couple.

But life with Colin is full of surprises. Not only has he also invited Joaquin to Cancun, but he’s hatched a Bachelorette-inspired plan to pit “Dickie” and “Quinoa” against each other in a fight for the Ultimate Prize -- which, naturally, is Colin himself.

When his cockamamie scheme turns Richard and Joaquin into allies instead of enemies, Colin may have to recalibrate his approach. Unless bringing everyone together has been his plan all along ... 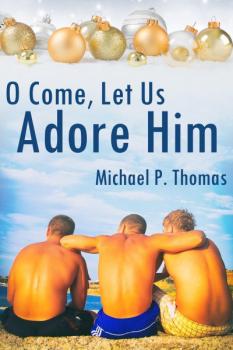 “Yeah, but ... I don’t want to have any more fun with Joaquin. We’ve had our little car accident, I was kind of hoping to leave it at that.”

“But is he here for you? That would not be good news.”

“You’re both here for me!” Colin exclaimed. “That’s the fun part. See, the other night? Me and my mom were watchingThe Bachelorette, and I got this idea.”

“Colin ...” Joaquin took another gulp from his margarita and approached. Colin took Joaquin’s hand. He reached for mine, but I stepped back.Hell, no.

“Dickie.” Colin took care to pull his poutiest face, his lower lip unfurled almost to his nose. He opened and closed his free hand with a skin-on-skin slapping sound until I took it in mine just to still it.

“But here’s your chance to prove it. Like a contest! We can have challenges, you can each take me on your most romantic date -- it’ll be just like the show! I even scoped out a little jewelry boutique in town. You can buy me a ring and propose, and I’ll pick a winner!”

He brushed me off. “Don’t worry, I’ll show you which rings I like.” He clutched at his chest and quaffed his drink. “I feel just like a princess!”

“Dickie, you mustn’t give up,” Colin said, giving my hand a squeeze. “I could totally pick you. There’s a lot to be said for personality.”

“Personality?” I would’ve been the handsomest man in the room if it wasn’t for Joaquin and those fucking cheekbones. I could’ve been a model! Well, you know ... in like a car insurance ad, or maybe a ketchup commercial. I had good skin, is what I’m getting at. And reasonably straight teeth.And a full head of hair, if you didn’t shoot me from behind. I’d show him personality ...

“And what exactly is lacking inmy personality?” I’d been wondering when Joaquin was going to pipe up.

“I don’t know.” Colin shrugged. “What do you care? You don’t need a personality,” he told Joaquin. “Look at you.”

“Which room is mine?” I asked him.

“Why? So you can go get ready for the first challenge? I’m thinking you can each rub one of my feet for an hour --”

I cut him off. “So I can have some privacy while I call the airline and change my ticket home. I thought this decision had already been made. I came here tobe with you, not to compete for you like some reality-show reject.”

“Well,” he harrumphed. Him and that last word. “With that attitude, it won’t be much of a competition.”