A sadistic cold-blooded killer is loose inside the domes on Terra. Galactic P.I. Majestic Kane soon learns the deaths are acts of vengeance against him, his friends, and acquaintances. To end the slaughter, Kane must put everything on the line to stop a madman, before it’s too late… 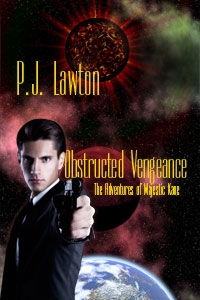 Kane left Jocko, his favorite arms dealer, a short time later toting some new toys. He tried to call Willis Jackson, but he wasn’t available. Kane ate a snack, and got through to Jackson on his next attempt. He quickly outlined his theory, and asked Jackson to do some checking. Jackson returned the call about two hours later.

“Hey Kane, I got the info you wanted. It beats me how we missed it. I checked with the prison… You were spot on. Our good friend, The Collector, did have a visitor. About a month ago this guy showed up. He didn’t have an Enforcer Pass, but since it was a visitation day there was no legal reason to keep him out. The guy almost freaked out the entire prison. It seems as though our old friend The Collector has a brother, an identical twin brother.”

“Well, I checked that out too. It’s pretty rare for a Riga native but it does happen. It is just our bad luck it was a scumbag like The Collector. Anyway, the brother just got out of prison himself; he did a dime for attempted murder. No parole; served the entire sentence. I guess that’s why we never heard of him. Some family, huh?”

“Yeah, The Collector Number Two. I figured as much, about him having done some hard time. He did have a pasty look about him, you know, what they call prison tan. Well, since we now know what we’re up against, we can stop it. I’ve got all the things I need. We’ll set the plan in motion tonight.”

“I haven’t told Janice anything about your plan, but I did tell her about the threat. She’ll be keeping pretty close to base for the next few days.’

“I don’t think we need to worry too much about the daylight hours; Centerville is too crowded. Anyone lurking about would quickly be spotted and the Enforcers would be called. That’s why I figure a night attack will be his plan. Anyway, the execution is getting close, so my plan goes into action tonight.’

“Are you sure you want to go through with this?”

“I’m sure. It’s the only way to get him. We won’t rest until we do. I just hate you and Janice being targets. What if I slip up? What if he’s smarter than me? I don’t know what I’d do if that happened.”

“Take it easy Kane. You know I wouldn’t want anyone other than you watching my back. I know you’re good. I’ve seen you in action, remember? It’s a good plan. It’s going to work.”

As darkness began to fall, Kane put on his newly-purchased body-armor, grabbed his arsenal, and headed for the Jackson home in Centerville. Centerville was a newer dome, built for the mid-level bureaucrat—in this case an Enforcement Officer.

The plan devised by Kane was simple. Wait for The Collector Number Two to make his move against the Jacksons, and take him out. No silly Stop, no inane Drop Your Weapon. Nothing. Just get him in the trigger-hairs, aim, and fire. Kane just hoped it worked out to be as simple as it sounded. There would not be a second shot. Two of his best friends’ lives depended upon him.