Myrna Ashlin Watts graduated from High School in Jacksonville, Fl just in time to find herself transported to a bizarre and primal planet corrupted by demon-dragons. And they want her DEAD. Her problem is she has been recruited to kill them, too.

18-year-old Myrna is drawn into the middle of an epic battle between Seraphym and Demons. An average High School student from Florida, struggling with inner demons resulting from a rape two years earlier, she wakes one morning on the Steampunk planet of Dracwald, home of the demon-dragons responsible for her brother’s recent murder as well as many other atrocities in the news. She meets Michael, who becomes her guide and explains that according to prophecy, Myrna must gather the remaining six Vigorios (teen warriors with special talents) then train with the Majikals on an enchanted island.

Reluctantly, and knowing it is her only way to get back home, she agrees to lead, battling dragons and monsters while crossing swamps and mountains, forests and seas. She wrangles with the old inner demons when three very different men join her quest—a seasoned demon/dragon-slayer who irritates but beguiles her, a tender and sweet mentor in whom she trusts completely and a roguishly handsome Scientist who sets her senses aflame. How is she expected to lead the others and keep everyone safe with so much inner turmoil?

Will love and lust, jealousy, greed, deceit and distrust break the delicate tie that binds these teen warriors called The Vigorios? Can a troupe of teens help the Seraphym finally defeat the massive empire of evil dominated for eons by the demon-dragons of Dracwald? 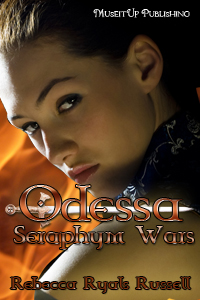 “Did anything…uh…traumatic or horrifying happen to you lately?”

I sat cross-legged on one end of the sofa, facing Michael at the other end.

“Yeah. You could say it was horrifying.”

I was so glad today was Saturday. It was the one day of the week I didn’t have school or work. I sat cross-legged on the sofa, watching my favorite classic movie, The African Queen, and munching on a bowl of popcorn resting in my lap. Suddenly my body went rigid. I sat bolt upright. My vision spun in circles. The room became kaleidoscopic. A rushing roar echoed in my ears. Then I saw my brother Quinn running around in circles, screaming. Wide-eyed, I stared, transfixed and mute. A boy with blond dreads, wearing a black leather jacket and ripped jeans, chased him across a field. Once close enough, he threw some kind of liquid from a small red can on Quinn. A smaller boy with spiky red hair tossed something small that glowed in the dusk. It landed on Quinn’s chest.

Flames shot high into the darkness as he screamed and continued running around the grassy enclosure. Insane laughter echoed in the still darkness. The crackling and popping of the flames snapped like firecrackers. Quinn’s arms flailed wildly, like he was trapped in a giant spider web. My hands balled into fists, wadding my skirt in my hands. I smelled the acrid, sour stench of burning flesh and hair but couldn’t scream. I was frozen—watching. Three teenaged boys, all wearing black leather jackets, surrounded him, laughing hysterically and pointing. An oddly metallic odor of sweat mingled with the bitter odor of searing flesh. Trees closed in like spectators, hovering in the blackness of night. Mute. Unemotional. Uncaring.

Quinn rolled on the grass, screaming a banshee wail while trying to put out the flames. Then he lay still. Silenced. The red-haired boy poured more of the flammable liquid onto Quinn’s back. The black-haired teen threw a match and Quinn flashed into flames again. This time there was no movement. There was no screaming. The laughter and pointing stopped. The three boys sneered at the flaming, blackened corpse at their feet.

“Too fast,” the smallest boy said, his hair the color of fire.

“Too easy,” the black-haired boy declared with a kick at Quinn’s head. “Whatcha gotta say fer yerself? Shoulda paid me back, slacker.” His voice slithered slowly like the snake his boots were made of.

“Not enough fun,” said the third. He stared at his feet, his long blond dreads falling across his face until he turned his head to look at the smallest boy. A port wine birthmark covered his cheek and part of his neck.

“Yeah. What video game did ya buy anyway? Sumthin’ with demons, I hope!” the small boy squeaked, his high-pitched voice grating on my nerves. All three of them roared with laughter.

“Loser,” the black-haired boy said. A wad of spittle flew onto Quinn’s back and sizzled.

Finally I screamed. As though released from bonds, I leaped up from the sofa. The stainless steel bowl of popcorn flew through the air, scattering kernels across the beige carpet and clattering upside down on the coffee table. Tears streamed down my face. My parents ran into the TV room. “Oh, my God! NO! This can’t be happening again…” I wailed, holding my head.

“What’s the matter?” my mother, Ashley, said, as she pushed my long hair back from my sweaty face.

Gasping with hiccups, I took a deep breath and, between bouts of crying, told them everything I’d seen. In unison they turned their heads and looked at the television. A Katharine Hepburn film danced on the screen.

“Are you positive?” Dad asked.

I stared my dad in the eyes and nodded. “Absolutely. You know my visions are always right. Mom.” I looked at Mom’s white face. “We have to try and find him. Maybe it didn’t happen yet. Usually it’s a warning. Remember Jarrod? And Marcy when she was three?”

Dad’s face went ashen and Mom’s hand, still resting on my back, began to tremble as it flew to her mouth.

“I’ll try to call him on his phone,” Dad said, leaving the room in a hurry.

Moments later he returned. “No answer. Should I call the police?”

“We don’t even know where he might be,” Mom cried, holding her face in her hands and rocking back and forth on the sofa beside me.

Dad knelt down and made eye contact with me. At first I didn’t see him. I saw Quinn again, running across the grass in flames.

“Where was he? Could you tell?” he asked.

His eyes, too, were already red-rimmed, as if they knew the truth.

“All I saw was grass. Like a park, maybe. But it seemed small. They took their time.”

I hiccupped, crying again as images of Quinn, much younger, flashed through my mind. Trying to pedal his red bicycle as I held it steady for him. Crawling into my bed in the middle of the night because he’d watched a scary movie. Rolling around on the grass in flames, screaming.

“I can’t just wait until we hear something. Cops won’t do anything based on a vision. I’ll drive around and see if I get lucky.” Dad looked at me, his face long and eyes sad. “I hope this time you’re wrong, hon.”

“Me too, dad. Me too.” I shook my head, rubbing weeping eyes.

Still hiccupping, I sat on the sofa and shut my eyes. Maybe there was a detail that would direct Dad. My head throbbed and my nose was stuffed up from crying. I hoped another migraine wasn’t starting. The scraping sounds of Mom scooting around on the floor picking up the popcorn irritated my brain. I’d noticed before that my hearing was super acute during and after a vision. But I knew she had to be doing something, so I pretended not to notice
When Dad returned without news, we all sat in a huddle on the sofa, crying and praying. Jarrod, eleven, and Marcy, fourteen, came home and learned of my vision. Since I’d seen him die, they knew there was no hope. My visions were always true.