Of Love and Feather Boas (MM)

Zachary Bodine owns a costume store with his friend and business partner, DeeDee Harrow. It's the only thing that keeps him going most days after the betrayal and near bankruptcy caused by his ex-boyfriend Maddox five years ago. It happened on Halloween, and he’s hated that holiday ever since. He’s become thin and grouchy, to the despair of his closest friends.

Lucius “Lucille” Lombardi, the gorgeous drag queen and part-owner of the popular club next door, has had his eye on Zachary for years. He’s determined to have the man for his own. The plan? A few home-cooked meals, some kisses, and Dinah Washington.

When Maddox shows up out of the blue on Halloween night, Zachary has to choose: let the past continue to rule his life, or don a feather boa and grab hold of Lucius. 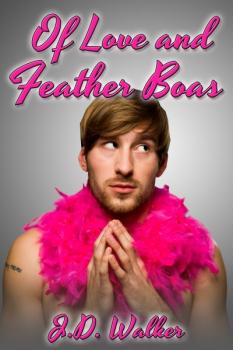 Of Love and Feather Boas (MM)

After finishing the meatloaf Lucius had dropped by right before closing, I took both empty plates and utensils, which I had washed, back to the club. The door was already open for patrons and the lines were long. The huge bouncer at the door waved me in with a wide smile when he saw me. I guess Lucius had warned him I was coming. Or at least, I shouldn’t be surprised since I’d probably seen all the employees of the club either in my store or passing in front of it at one point or another.

I finally made it to the bar -- and safety, I hoped -- where I found Lucius -- now Lucille -- leaning against it and casting an eye over the crowd. He was dressed in a white dress, reminiscent of that famous Marilyn Monroe photo, even down to the blonde wig and heels, though the shoes were bright purple, naturally.

I touched him on the shoulder. “Thank you,” I said in greeting and placed the plates and cutlery on the bar next to him.

He turned and gasped. “Zachary! I’m so glad you stopped by.” He pulled me into a hug and kissed me lightly on the lips. Lucille used a thumb to wipe away the lipstick left behind.

I moved away as much as he’d let me, which wasn’t far. “I’m only dropping off the plates. Don’t get any ideas,” I said, though I’d briefly felt his cock through the dress material. He hadn’t tucked, and he’d been semi-hard. Had that been for me?

Lucille pouted. “Don’t you want to hang out, just for a little bit? It’s the least you could do after I slaved over a hot stove all day for you.”

I actually laughed at that. “Nice try.” Curious, despite myself, I looked around at the growing crowd, resigned to being held lightly in his arms. “Is it always like this?”

He moved me to the side and kept an arm around my shoulders. “Oh yes. Every night. We get close to fire hazard proportions on Fridays and Saturdays. Thankfully, the fire marshal doesn’t stop by in that capacity, often.” He chuckled. “He’s a good friend. You should see him in a dress.”

I refused to comment on that. “So are you performing tonight?”

“No, but I will be on Halloween. I’ll be singing our song, so you’d better come.”

I thought about Dinah Washington and our dance on Sunday. “Lucille...”

I sighed. “I wouldn’t expect any less of you.”

“You know me so well, already. That’s a good sign.” He moved away. “It’s almost time to get things started. Stay, or don’t. But it would be nice if you did. Let yourself go a little. It will do you good.” He cupped my cheek, searching my face for what, I didn’t know.

I could see beneath the flirtatious manner and makeup that the man underneath it all was intent on breaking me out of my self-imposed shell, whether I liked it or not.

An Omega for the Beasts (MM)
April Andrews
In Shelf
$3.49
Tweets by
sirenbookstrand