When you're a middle-aged farmer's wife looking at the handsome younger man your son has brought home for Christmas, it's harmless, isn't it? No flirting, no innuendo, just keeping an eye on him. It doesn't mean anything, right?

Sara wouldn't dream of cheating on her husband, but when David brings home a friend from college, she's faced with a hundred questions she doesn't have the answers to. And it all leaves her feeling Off Balance. 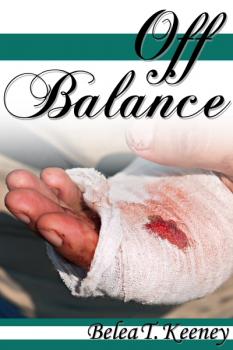 Sara Livingston stepped off her front porch, watching her husband, Stan, pull in the driveway after a three hour trip to the Indianapolis airport. In the front seat, her handsome David swiveled around to talk to the man in the back. He was bulky, bald, a man she would have glanced over at the supermarket or the post office and instinctively pulled away from.

“Hey, Mom!” David unfolded from the front seat, his blue eyes bright, his handsome face in a glowing grin. He picked her up to hug her, mussing her dress, but she didn’t care. She tugged his right ear with affection. Her beautiful son, tall and strong and he took her breath away. So grown up and such a man now. He kissed her cheek shyly.

“I want you to meet Marcus,” David said, and held her hand as the stranger came around the door. The man, no college student, was broad and frightening-looking: that bald head and his dark eyebrows. She edged back a little as he shook her hand. Yet she felt the visceral pull of him, a strong man, confident in himself and his body, and what he could do with it.

Stan popped the tailgate of the truck and began handing out luggage. David stepped back to help his father. Sara stared up at Marcus for several seconds, long enough to embarrass herself. “And did you meet David at the University?”

“Sort of. I host student interns at my farm and he came to work with the group for the January semester.”

She nodded, not really hearing him. The skin on her belly tingled in an unsettling way and she wanted to rub her legs together. He was tall, over six feet, not as tall as her leggy David. Marcus’s lips were full and soft-looking and she was intrigued by his bare scalp. Did he shave it or was he truly bald? He looked too young to be bald, though clearly older than David.

“We put the new bunk beds up there for you. The bottom one is a full.”

Marcus grabbed the two big rollaways out the truck with the ease of someone used to moving horses around, loading saddles and equipment. Sara pushed up the truck’s back gate with both hands and followed him. Their driveway was gravel so Marcus carried both of the bags, Sara behind him, watching his broad back and shoulders as he moved.