Twenty-one years ago a bargain was made for her existence. Twenty-one years ago was the beginning of the end. Born to serve Satan, Aurora Starr wishes she could lead a normal life. Being a demon, that’s not so easy to do. By night she takes the lives of those Satan chooses. Despite her hatred for her job, she knows she must continue, but all she wants is to live like a normal human. Enter Scott Monroe. Tall, blond, and gorgeous, he is more than Aurora can resist. Although mating with a human is taboo, Aurora throws caution to the wind and begins seeing Scott. But when Satan makes her choose between her family or the man she loves, Aurora has had enough. Will love win in the end, or will Satan damn them all? 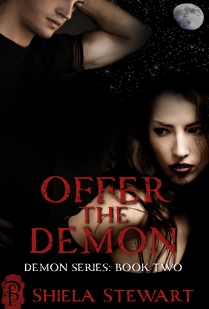 About to approach them with his card and the usual speech, he spotted her. He wasn’t sure how he’d known it was her when she didn’t look anything like herself. Maybe it was the hair. Not many women wore it so long, long enough to graze her backside. It certainly wasn’t the clothes she wore, or lack thereof. The skirt should probably be illegal. The top—he didn’t want to even go there. It was her, there was no doubt. It was Aurora, and the way she moved to the beat of the music looked damn good.

It was time he put a stop to this.

He stepped into the crowd surrounding her and before he could take control of the situation, she leaned against his chest, wound her arms around his neck, and began gyrating.

He probably should put an end to this, his mind was all but screaming it, but his body refused to listen. Putting his hands on her hips, he swayed to the beat with her.

Slowly, seductively, she turned, and her eyes widened with surprise. “Scott? Well, you certainly know how to move.”

Gathering his thoughts, Scott grabbed her by the arm, and dragged her away.

“What the hell do you think you’re doing?”

He didn’t answer until they were outside the club and far enough away from the crowds. “Getting you out of there.”

She jerked her arm free. “I wasn’t ready to leave.”

“Well, now you are.” When she turned back to the noisy club, he grabbed her arm. Before she could protest, he slung her over his shoulder, getting a perfect view of those gorgeous, shapely legs. Sucking in his lust, he carried her to his car.

“Put me down!” She wiggled, kicking her legs, which he held down for his own safety. “I said put me down!”

He did, but not before he’d unlocked his car. Setting her in the passenger seat, he shut the door and engaged the locks with his key fob. He unlocked his door, climbed into the driver’s seat, and was instantly bombarded by her attitude.

“What the hell do you think you’re doing?”

He slammed the car into drive and sped off. “Taking you home.”