Most of us spend forty hours or more a week at the workplace. Shuffling papers at a desk job, taking orders, waiting tables, working in the field, punching a time clock. Whether it's a career or simply a job to be done, we do whatever it takes to make a living. Sometimes the people we meet at work are among the best -- and the worst -- we'll ever know.

From harmless, sweet flirting to fulfilling hot sex, these stories show you just how much some men enjoy their line of work! 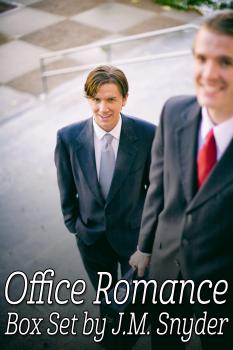 FROM "At Your Service"

The waiter comes back a few minutes later, glaring at us as if he thought we were going to leave and he's mad we didn't. With a sigh, he sets out silverware. "I'll be your waiter tonight. My name is --"

"Todd," someone behind him says.

I look up to find another waiter pushing Evan aside. Now this one is cute, with wispy blonde curls and tan skin and dark eyes that light up the room when he smiles. And he's smiling now, smiling at me, as he takes our napkins from Evan.

"Todd, at your service. I'll be your waiter tonight."

"This is my table," Evan starts, but Todd kicks him in the shin and he bends down to rub his leg. "Ow! Fuck, Todd." When Jen giggles, he frowns at us. "You're working the other side of the room, remember?"

Todd lowers his voice and turns away as if he doesn't want us to overhear. "Take one of my tables."

Evan's still frowning like he thinks it's a bad idea to switch.

Do it, I want to say, because Todd's a cutie and he smiled at me. I want him to smile again. He's so close, my menu brushes his wrist, and I watch the way the fine hairs on his arm stand up beneath the lamented paper when I move my hands.

In a heated whisper, Todd says, "Just this once, Evan. Please."

"Fine." Evan glares at us one last time like we're to blame, then stalks away.

When Todd turns to us again, that smile is back, and I can't help but grin at him. He's got a sexy way about him, and me, I'm glad Evan is gone.

Rolling his eyes, Todd leans down over the table and says, "Sorry about that, folks. You two ready to order?"

Jen points at the Jack Daniels chicken. "Can I have this?"

Jen's eyes widen and I think, Great. Out of chicken. There goes half the shit on the menu.

Then, in the same voice, Todd tells her, "I'm just kidding."

I laugh at the confusion on her face and Todd smiles again. He waves the question away. "Nothing." Still grinning, he winks my way. "You want the JD chicken?"

She nods and he turns to me. "What about you, handsome?"

My face heats at his words and I stare at the menu, unsure what it is I want. Him, I think, but he's not on the menu. "You had me there for a minute there about the chicken. That was a good one." 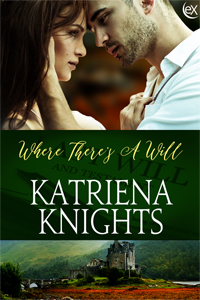 Where There's a Will
Katriena Knights
In Shelf
$4.99