Part-time actor Paul Neadley regularly allows himself to be abducted by his cop boyfriend Kirk Rowdy and taken to a cabin deep in the woods. There the officer of the law and the sexy bad boy act out their naughty roleplaying fantasies.

Paul begins to wonder if he should kick his four-year relationship with Kirk up to the next level. Or, as twenty-somethings, are they too young for such big decisions? Everything about their relationship seems perfect. But the big pink elephant in their boyfriendhood remains -- should they marry or stay as they are?

Through a string of sexual flashbacks, Paul comes to terms with his troubled past and is finally able to make a decision about his future. Is Kirk Paul’s soulmate or just a good time during roleplay? 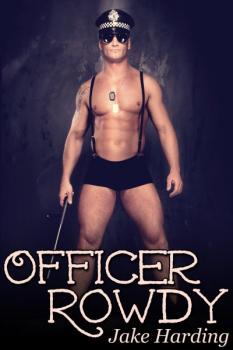 The West Templeton Tudor along Lake Erie was cozy and impressive with its three thousand square feet, pool and fountain in the back, two gardens, and a two-car garage. It was almost dark outside. Twilight showcased a blue-purple sky with very little wind.

I stared at Rowdy from a bedroom window on the second floor of the Tudor as he drove around the confines in his white-and-green cruiser. I assume he didn’t see anything out of the ordinary around the abode’s property line. No broken gates. No movement on the premises. Nothing questionable. At the front wrought-iron gate that stood ten feet tall, he used the four-digit pin number for access, let himself onto the property once the gate unlocked and mechanically opened on its own. He slowly drove up to the Tudor’s expansive entrance, shining a spotlight over the lawn, seeking an interloper. Every now and then I caught a glance of him in the Toshiba camera and thought him handsome beyond words. The man was block-shaped with sapphire blue eyes, Stallion-sized, twenty-nine years, and two-hundred and twenty-five pounds. Under his police uniform, I knew he had a hairy chest, a nine-inch hard dick, and a thick tangle of pubic hair.

My game was on, of course: set off an alarm in the house on purpose; start the shower; strip out of my clothes; climb in the shower; wait for Rowdy to show and ... seduce me. My little game had worked before; I only wondered if it would work again. Selfish for his skin, hungry for wild sex with the man, needy of his well-built body, I only hoped that he would take advantage of my trim body another time, pleasuring the both of us.

Earlier that morning after we fucked and were side by side with sticky chests, he said, "Let's play that game again."

"The one where I'm the first responder. What do you say?"

"And I play the victim, right?"

"Whatever it takes," he said.

"You really do like that game a lot, don't you?"

"More than we both know. I do enjoy my games."

"You have addictions, Rowdy. Do you think that's really healthy?"

"Things could be worse."

He was right. They could. Such addictions could have been with alcohol, drugs, stealing things, gambling, and a dozen more tempting activities. None of those demons had played a role in his life. But I did, and told him, "I'm your addiction."

"I never denied that, and never will."

I was satisfied with his answer.