One for the Team (MFM)

Lauren Haverfield makes a forward pass and gains possession of a football team full of prospects. Kevin Deller and Darren Banks are the first eligible receivers of Lauren’s affections, but will they face their share of penalties if they score a touchdown and win their team owner’s heart?

The line of scrimmage won’t prevent this dynamic duo from rushing for the ultimate score after Lauren secures team ownership of the Knoxville Soldiers. With big plans and illicit long-term goals, Lauren offers perks and benefits as she renegotiates contracts for the men she wants playing on her field, and in her bed. 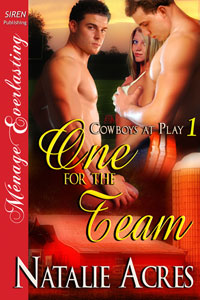 One for the Team (MFM)

Heat Rating: Scorching
Word Count: 36,740
9 Ratings (4.2)
Contemporary Menage a Trois/Quatre Western/Cowboys
In Bookshelf
In Cart
In Wish List
Available formats
Mobi
HTML
PDF
ePub
Cover Art by Les Byerley
Reviews
FANTASTIC! This series is gonna be a must read! Cowboys and Football players and menages i am in heaven. I just adored Lauren she knew what she wanted and she was the girl that was gonna get her men. BRAVO! Natalie you did it again. I am so hooked on your books. You never let me down. Love it!!!
Barefoot Okie
Read more...
Professional Reviews

4 KISSES: "Lauren Haverfield gains possession of the Knoxville Soldiers Football team. Kevin Deller and Darren Banks are receivers on the team and Lauren wants them to be receivers of her heart. But, Kevin and Darren are worried they will face penalties if they score a touchdown with their new boss. The end zone is the goal for these three. Now that Lauren has ownership of the team she has a new contract to negotiate with Kevin and Darren. She offers a contract that offers perks and benefits beyond money; a contract which will have them on the field, in her bed, and together for life. Lauren Haverfield was engaged to the Knoxville Soldier’s team owner, Cap, but broke off their engagement since he couldn’t give her what she wanted the most – Fidelity. Kevin thinks Lauren is a trouble making gold digger. After spending some time with Lauren, he discovers that while she may enjoy the lavish lifestyle that Cap gave her, she wants more than financial rewards. She wants someone who only wants her. When Lauren sets her sites on Kevin and Darren, she lets them know she wants them and not just for one night – but for the long haul. Kevin and Darren decide to take One for the Team. This was a really good read! At first I wasn’t very impressed with Lauren since she did seem like a gold digging hussy but once I got to learn more about her I realized that money wasn’t all she thought about. She thinks money is important but realizes that while enjoying it for yourself you can also use it to better other people’s lives. I think she realized that doing for others is sometimes even better than doing for you. She also discovered that sometimes even though a person has hurt you sometimes the person they are hurting the most is themselves. I definitely recommend this book by Natalie Acres and suggest you read everything you can get your hands on by her (and I know you will!). Once you do you will discover why I suggested you read all her books. She is an awesome author that will make your panties wet, keep you entertained, and teach you a thing or two." -- Laura, TwoLips Reviews

More From Cowboys at Play

Her pussy thrummed as she anticipated what they held in store. Her asshole clenched, and her breasts were full and heavy.

She lay down on the bed, and both men towered over her, their cocks near her face. She took hold of them, pulling them through her tightly drawn fists as she toyed with their weight, silently comparing the two.

Darren’s dick was long and lean. His rigid length showcased the tiny veins quite visible and pulsing with his excitement. The umbrella shape at the top pushed against the transparent condom he wore, and he stretched the condom until she was convinced there wasn’t another inch the rubber could give.

Kevin was well endowed. A good nine inches, maybe more, he was as thick around the middle as Lauren had ever seen. The condom rolled at the base and looked as if it didn’t provide a nice fit. Maybe she should ask him to buy supersize next time.

On second thought, she didn’t want to offend one while complimenting the other. She pumped them as she stroked, easy at first, a little more rigorously as time passed.

When she couldn’t stand the teasing she provoked any longer, she came to her knees. Facing Kevin, she placed her hands on his shoulders and kissed him. Her tongue worked through his full lips as she looked into his hooded eyes and saw the sincerity living there. Kevin was a woman’s man. He was rough around the edges but genuinely kind in the center.

Darren, on the other hand, could’ve been a player. He certainly had the body for the part. With a well-defined six in the middle, his legs were long and muscular, and his arms were built for holding a woman.

Tearing herself away from Kevin’s lips, she stroked Darren’s cheek, tenderly brushing her knuckles over his cheekbone before she kissed him as well. He grabbed hold of her as soon as they connected. Screwing his tongue inside her mouth, he tapped the tip, drew her in a little deeper, and suckled the tip, licking at the end like she’d just become his favorite new candy.

They soon parted ways, and Kevin stretched out on the bed, his legs slightly parted. Holding himself at the base, he tilted his head and said, “I’ll be on the bottom.”

“Good,” Darren said, grinning. “Because I wanna piece of this behind.”

Once Lauren towered over Kevin, Darren grabbed her hips. “Looks like you’re the receiver, doll.”

“Don’t start that,” Kevin said. “We’re playing with Lauren today. We aren’t on the field.”

“If we were,” Darren said, preparing her as he squirted lube between her cheeks, “I’d call this the field of dreams.”

“You’re so corny,” Kevin said, looking over her shoulder.

“You’ll be in the mood, sunshine,” Darren promised her, kissing her hip and dragging his fingers down the crack of her ass.

Wielding his cock in her direction, Kevin teased her, rubbing the tip over her mound, pressing the head against her vagina.

“Scoot back here,” Darren said, clutching her hips and positioning her bottom in front of his cock.

“Don’t get greedy,” Kevin said, licking at her nipple while tweaking the other one.

“Ready, baby?” Kevin asked, suckling her breast as he studied her face.

She was as ready as she’d ever be.

She tossed her head back, rolled her hips, and bucked as soon as Darren penetrated her.

Gulping, she said, “Wait a minute. Give me a second.”

“Are you all right?” he asked, feeding her an inch at a time.

“Oh good hell, you weren’t all the way in?” she screeched.

“Not yet,” he said, a dry chuckle leaving his throat.

He paused inside her, allowing her a moment to stretch around him. He eased forward, rocking toward her as he fucked her. And by the time his groin bumped against her ass, she was already sore from the inside out.

“Ready or not,” Kevin told her, pointing his cock toward her pussy. 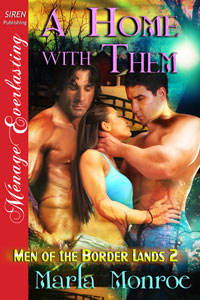