Born blind, seventeen-year-old Bobby proves he's more than capable to live his life like any sighted person. Quick-witted and funny, he's learned to navigate the world without ever seeing it. Once school is out, it's time to get a summer job.

For Tyler, summer vacation is an opportunity to spend more time playing the drums with his queer alternative band. Growing up gay, Tyler prides himself on how open and easy-going he is. Life would be perfect if he had someone special to share it with.

During the day, Bobby hangs out with his best friend, Quan, whose girlfriend sets him up on a blind date with her cousin, Tyler. Neither boy knows what to expect. Bobby is presented with the opportunity to let his guard down and let someone in, and Tyler is given the chance to prove to himself just how easy-going he really is.

But when fate intervenes, the two boys struggle to survive One Frightful Date. 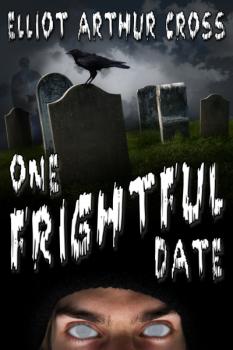 After grabbing my aluminum walking cane, I left the house and found a warm noon waiting for me, complete with birds chirping from around the house, probably in one of Mom's feeders. I took eleven steps from the front of the house, turned right for thirty two, and then another twelve more to the front of Quan's house. I knocked and waited a minute for him to let me in.

“Nothing. It was either read or chill here,” I said with a shrug.

“I'm touched I beat sitting alone reading,” Quan said. He was a smart guy, but not a reader like me. I had an entire bookcase full of books in braille and audiobooks.

“Don't be. I couldn't find my book,” I joked. Quan stepped out of my way as I walked inside. “Is Zoe here yet?”

“She just texted me another five minutes.”

“Cool. I figured out what she wants to ask me about,” I said with a grin.

“That stupid spin the bottle game was two years ago,” Quan said. “First time I played and every spin landed on a guy. And you wonder why I have self esteem issues.”

“Hey, you were a fine kisser. Better than the others. Sally and Steph jammed their tongues down my throat―”

“And Mikey acted like kissing a boy would give him the plague.”

“Which he killed that night,” I shot back.

“I thought you got over him when he started his vampire phase and all he drank was clamato juice.”

“Don't remind me,” I said with a shudder, remembering Mikey's horrible breath. “You want to listen to some music?”

I sat on the living room couch and waited eagerly for the CD to begin since Quan usually had good taste in music. Suddenly the stereo kicked in and I was met with an amateur, but interesting, sound. The song, upbeat with an alternative style, kicked into gear with a steady drum beat and a decent vocalist. I expected the singer to sound whiny with that type of music, but he only occasionally veered toward emo.

“What do you think?” Quan asked after a minute.

“It's cool. There's almost like a '60s, Grass Roots vibe, you know? How many tracks are on here?”

“What's their name?” I wondered if I'd heard of them before, though I doubted it. I've been accused of being a music snob by more than one person.

“This is My Roommate,” Quan replied.

“Are they queercore?” I asked with a smile.

A car pulled into the driveway before Quan could reply. I leaned my head back against the couch and listened to the next song play.

“Hi.” Quan's voice drifted from the front, followed by Zoe's. And then a kiss. “Bobby's here.”

A second later the music was turned down and I heard Quan and Zoe enter the living room.

“You can use the word 'see' around me,” I told her, hiding my grin. People were so funny sometimes. “And I'm doing awesome. Got a couple months off until my senior year, you know?”

She sounded nice, and she made Quan happy so far, so I decided to give her a chance. We talked about her plans for college and summer jobs for awhile before she turned the conversation around to me.

“So, I'm not sure how you feel about dating,” she said abruptly after telling me she wanted to be a veterinarian, which I hope wasn't a segue.

“Depends,” I said suspiciously. “Is this what Quan said you wanted to talk to me about?”

“I didn't want to offend you.”

“How would that offend me?”

I folded my arms and thought about the possibilities. If this guy needed his cousin to set him up, how cool could he be? On the other hand, I was single and wouldn't mind Quan finding me someone. And would this guy care that I was unsighted? Maybe Zoe was just doing this out of pity or something.

“I guess I'll pass,” I told her. “It's awkward meeting someone like that. I mean, if he's at a party you can introduce us or something.”

“Oh, okay.” Zoe said. I could tell from her inflection she was frowning.

There was a rustling, that may have been her smacking Quan, who immediately asked, “You like This is My Roommate, right?”

“Why didn't you say so?” I asked, feeling a grin leap to my face. “A blind date sounds fun.”