Who knew trying to kill one another would be such an aphrodisiac?

Garik and Rachel are just like Romeo and Juliet, except for the fur, the fangs, and the powerful urge to fornicate despite being members of warring wolf packs. She’s a curvy were-soldier scout for the Central Coast cell of the Odin Wolves. He’s the sergeant-at-arms for the Sons of Fenris, a pack of motorcycle-riding werewolves descended directly from the Fenris Wolf himself. And those don’t mix without spilling blood.

Rachel Corey has been doing everything she can to avoid Garik Hagen and her attraction to the Fenris Wolf. But what’s she supposed to do when he prowls right into the middle of her assignment to recover a powerful Aesir artifact from an art dealer delivering the relic to a private buyer? How is one little curvy were, the youngest and weakest of her pack, supposed to protect herself from the Sons of Fenris MC when the rest of Garik’s gang show up with the intention of claiming the prize for themselves and ravaging Rachel in the process? Can she trust Garik’s word that he’s there to head off his own pack and protect her? What if the sexy, brooding enforcer is just part of a trap she can’t resist?

Worst of all, what if Rachel’s instincts are right and Garik is her mate? 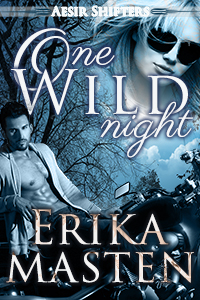 Thomas Poulsen’s description of his job went on, Rachel could tell from the distant droning of his voice, but she—her attention, her senses, her wolf—was elsewhere. Just that quickly, instinctively, her focus shifted without her conscious effort. Another shifter was near. The she-wolf felt it in the bristle of fur prickling under her skin, ready to erupt. She heard it in the sudden stillness and quiet where there had been birds, before they had scattered, just as her senses had perked. Then she smelled it, smelled him.

Under the earthy musk that all wolves possessed, she discerned cypress and the sweet warmth of cinnamon mixed in with the kick of good bourbon. Only one man smelled like that, and her body reacted by flushing with heat, by slicking her sex to be mated and bred, by sending throbbing pulses of blood to her nipples and that most sensitive button of nerves between her legs.

The wolf in Rachel growled low inside her, and she could practically feel her ears flattening and her lips curling despite not being in canine form. It didn’t like her body’s reaction at all.

“Please excuse me a moment,” the scout told Mr. Poulsen and stood up in the middle of the conversation. Blindly, she moved toward the source of the danger—of the desire—she perceived with head and heart and sex. After a few steps, Rachel’s vision cleared, and she recognized him.

Garik Hagen, deeply tanned and lightly bearded, black-haired and hard-bodied, was hopping the low iron gate that separated the deck from a small walkway leading to the parking lot. His long, muscular frame stalked directly toward Rachel, as though he had homed in on her exactly as she had on him. Fuck, the chest that man had! Who was cut like that? He was shirtless under a partially unzipped gray hoodie, rather than wearing the black leather jacket that normally proclaimed him the sergeant-at-arms, the enforcer, for the SoF motorcycle club. The Sons of Fate to the uninitiated and the Sons of Fenris to those in the know, it was as close to a pack as Fenris-blooded wolves came. Theirs was a viciously chaotic and independent breed by the very nature of their progenitor, the Fenris Wolf himself. Elias had said many times that the Sons of Fenris alpha could hardly contain them and had little inclination to actually do so anyway.

Every survival instinct in Rachel told her to attack Garik Hagen before he could make whatever move had brought him here. Her wolf demanded she shift, heedless of human witnesses and the fact that Garik was an older, stronger shifter than she was. And yet her body, the woman in her…. Goddammit if Garik wasn’t the only male, human or shifter, who made her want to spread her thighs for him on sight.

Even Rachel wasn’t sure what she was about to do as she and Garik closed those last few feet between them.

***
With all that silky, wheat gold hair of hers fanning out like a display of temper by a wild animal, Rachel Corey prowled straight toward Garik…and shouldered him hard as she veered past him and kept right on walking. It stopped him in his tracks, left him standing astounded on the weathered deck as a waiter bustled past with a cautious glare. Both the man and the wolf in Garik growled in appreciation, at the little she-wolf’s boldness and at the way her curvaceous body had swayed as she came toward him. The heat that always stirred in his groin at just the thought of her now flared up in a full burn, cock jutting to attention in his jeans, at the sight of the gray cotton tank stretched taut over her full tits and the lightweight cargo pants hugging her rounded hips and ass. It occurred to the Fenris Wolf that he could rip through those clothes in a couple of seconds, at most, and have the luscious she-wolf naked and hot in his hands. If he hadn’t known trouble was headed this way, her way, his reaction wouldn’t have been so patient.

It was still a conscious effort to keep from grabbing Rachel by her soft, bare arm as she bumped Garik on her way past. The smell of forest and amber and apple, the scent particular to her, teased his senses before disappearing into the breeze coming off the surf. By obviously expecting some kind of civility from him, she was failing to take into account the impulsive nature of a Fenris Wolf and the fact that he spent his time surrounded by pack brothers who prided themselves on taking what they wanted when they wanted it. All the better if it shocked everyone around them, and best of all…if it involved a struggle.

Behind Garik, that iron gate he’d jumped to reach the deck squeaked open and then slammed closed with a jarring clank. Gritting his teeth and reminding himself that he’d known Rachel was going to be hard to deal with, that she had come at him with teeth and claws every time they’d encountered one another, the enforcer turned and followed the she-wolf. His she-wolf. She was still fighting that, apparently. When he realized the voluptuous Odin Wolf scout was leading him through the parking lot and behind the restaurant, he knew what was coming. He decided then…it was going to be her.

A Lynx in Their Den (MFM)
Marla Monroe
In Shelf
$7.99
Tweets by
sirenbookstrand