Only His Heart (MM)

Dr. Calvin Lassiter is an emergency room doctor who buries himself in his high stress job. He has no time for a relationship and most definitely is not interested in the new emergency room nurse, Matt Walton.

Matt is exactly what Dr. Lassiter doesn't want. An eyeliner wearing bad boy who rides a motorcycle. Matt is intrigued by the stuffy, too beautiful for words doctor, but the good doc is as cold as ice. Matt's fellow nurses bet him he can't melt Dr. Lassiter and get him into bed.

Too fascinated by Calvin not to try, Matt succeeds in breaking the doctor's hard exterior, but as their relationship turns serious, the possibility hangs over his head that his coworkers will tell his sexy doctor the truth and end his dreams of winning Calvin's heart forever.

Only His Heart (MM)

Matt Walton was having a pretty decent second day. Sure his feet hurt. Whose wouldn’t when they hadn’t been allowed much rest in the last forty-eight hours? Finally, he had a few moments to take a lunch.

He glanced around the basement cafeteria. Only a handful of people were there, not surprising as it was close to one in the morning. He didn’t recognize any of them, but it was only his second twelve-hour shift.

Matt walked over to the food area and decided on a small salad and a slice of peach pie along with a cup of coffee. As he approached the register, he couldn’t help but notice a pretty young thing sitting by himself at a table in the corner drinking something out of a Styrofoam cup, his eyes downcast. The young man was dressed in scrubs and Matt figured he was probably an orderly or a lab tech.

Even as he was paying at the register he couldn’t keep from staring at the pretty young man. He was just Matt’s type.

Matt, who had come out as a teen, didn’t bother to hide his sexual orientation from anyone. He was out and proud and had participated in a number of gay pride events.

And this kid was seriously hot. Damn, he hadn’t been hit with such a wave of lust across a room like this in ... a long fucking time.

Everything about him was gorgeous. His dark sandy blond hair, the porcelain skin, and those big pouty lips. Matt wondered what color eyes he had. He would guess blue. No reason not to find out.

He took his tray and walked to the corner table. He was really hoping this beautiful man was gay. Probably not, knowing Matt’s luck, but he could dream.

“Hey, kid, is this seat taken?” he asked as he stopped at the table.

The pretty young thing, who had blue eyes Matt noticed when he looked up, gave him the coldest look he’d ever seen. He stared daggers is how it was referred to, and lesser men would no doubt have been felled by it.

Matt’s jaw dropped. Whoa, this was Dr. Lassiter? Since the moment he began his day yesterday the other members of the nursing staff had warned him about Calvin Lassiter. Biggest prick you’ll ever meet, as cold and arrogant as they come, and even guy is an ice queen. This reminded Matt that when the nurse who said that about the doctor found out Matt was gay, she’d apologized all over herself, saying she hadn’t meant anything bad. Dr. Lassiter was gay, though, which is how he got the nickname.

“Sorry, doctor. Can I sit anyway?”

Dr. Lassiter didn’t respond, he just raised his cup to his stunning lips and took a sip.

Shrugging, Matt sat across from him and stuck his hand out. “Matt Walton.”

“I know who you are.” He didn’t take Matt’s hand. “You almost ran me over today in the parking lot with your motorcycle.”

“You really ought to drive more carefully in a hospital parking lot. We don’t need any more patients.”

“You walked in front of me and I was barely able to swerve to avoid,” Matt angrily retorted. “Maybe you should watch where you are walking.”

The doctor sighed. “Even if I did, there will be lots of people in the parking lot doing the very same thing. Families visiting loved ones. I’m sure as a nurse you don’t want to be responsible for running over some child coming to visit their sick mother, do you?”

Dr. Lassiter’s full lips curved up in a slight smile that was too damn adorable for such a jerk. He hated being a sucker for a pretty face.

“I have to say, Walton, I’m kind of surprised.”

He shrugged. “I would think someone who is a nurse, one working in an emergency room, no less, wouldn’t be so careless as to ride a motorcycle.”

Okay, now the good doc was sounding like his mother.

“I’m a safe driver,” Matt replied in a tone to match Lassiter’s.

One blond brow rose. “Even so, car drivers may not be so safe. I’ve seen too many motorcycle accident victims here not to be concerned.”

Matt tapped his fingers loudly on the table, realized he was doing it, and hid his hand in his lap. “So, doctor, you don’t see car accidents, too? Just motorcycles?”

“Hmm, so do you tell all the staff you are surprised they drive cars?”

To Matt’s delight, Calvin Lassiter turned a light shade of pink. Unfortunately, it made him even more appealing, damn it. 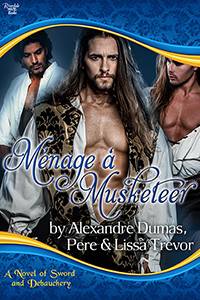 Double In (MFM)
Tonya Ramagos
In Shelf
$4.99
Tweets by
sirenbookstrand