There's only one man Gillian's loved, and it's the man that used to be married to her mother. The years have gone by, and her relationship with David is closer than ever. But what she wants from him she knows she can never have.

David stopped Gillian from getting assaulted seven years ago. After that his feelings for her changed into something dangerous. He loves her, would do anything for her, even if that means following her and making sure she's safe.

He isn't ashamed in what he does, because it's all in the name of love. But when another man takes an interest in Gillian, David knows he can't stand by and let that happen. But when Gillian finds out David's all but stalking her, can he stand the thought that she may want nothing more to do with him? Will the betrayal be too much for her?

She speared her hands in his hair, tugged at the strands, and made these small noises in the back of her throat. He swallowed the sounds, needing more, and wanting her to surrender every part of herself to him. This was what he’d wanted from the moment he realized he couldn’t let her be with anyone else, that he wanted her as his own. It had been so fucking hard staying back, keeping his feelings in check, but right now none of that mattered.

“I don’t want you to let me go,” she whispered.

He froze, looked down at her, and saw her eyes still closed, her mouth slightly parted. He moved his thumb along her bottom lip, pulled the soft, slightly damp flesh down, and watched it move back into place when he let go. She was so fucking beautiful, so pliant for him, giving, and not letting her inhibitions control her. Whatever happened when this was all over was still a mystery, but right now he could show her how precious she was to him, that he’d do anything for her, even kill without a second thought.

“No way in fucking hell would I ever let you go, Gillian.”

She opened her eyes and looked at him, the vulnerability right there at the surface. He cupped her cheek in his hand, tilting her head back an inch more. “You’re mine. You’ve always been mine.”

Her breath hitched a bit, and he leaned down and took her mouth in a kiss again.

She felt good in his arms, really fucking good, in fact, and he knew he wouldn’t be able to let her go.

I can’t walk away from this again. I can’t hide what I want from her. Everything needs to be out in the open.

But as he thought that, he heard her moans, her increased breathing, and all he could think about was making her feel good.

Once he had claimed her, fucked her and let her know she was his, David wasn’t going to stop making her see she was his.

After several seconds she broke the kiss and looked up at him. Her lips were swollen, red, and wet from their kissing. She didn’t speak for several moments, but he didn’t push her into saying anything she wasn’t ready to.

Finally she exhaled and spoke. “There is a part of me that feels like what we’re doing is wrong, like it’ll all get ruined.” She looked at his lips, and he couldn’t hold back the groan.

He could relate to what she felt. Hell, that was the reason he hadn’t even confessed what he wanted with her. “Is this what you want?” He stroked her cheek with his thumb.

“Does it scare you?”

“And you feel good being up against me?”

She closed her eyes, licked her lips, and whispered, “Yes.”

“Then doesn’t that mean it’s real, that it’s right?”

She opened her eyes again, reached up, and touched his chest, right over his heart. “Yes.”

Don’t think about anything else but right now.

He pushed any thoughts out of his head that didn’t focus on this moment, of the woman he loved in front of him. He didn’t stop himself from kissing her again. “How can this be so wrong when it feels so damn good, baby?” he groaned the words against her mouth. “The only thing that matters is us and what we want. No one and nothing else matters.”

“I know, baby.” He smiled, an act he’d only ever done for her. She was the only person that could make him feel other things aside from the rage, jealousy, and violent energy that consumed him.

He slipped his hand behind her head and gripped the base of her skull. “This can be so damn easy, Gillian.” His mouth was close to hers, but he didn’t lean in that last inch and kiss her.

She stared at him for a second, and he wondered if she’d stop this, common sense that he’d once been her stepfather, making her realize this wasn’t “right”. But as the seconds ticked by, he realized this couldn’t be stopped, not by either of them. 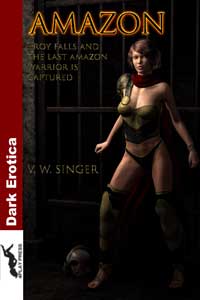