Five erotic stories of M/M self-discovery.  Come with a Friend- Jason’s tragic childhood and history of being bullied isolates him until a friend from the past cooks up a scheme to take revenge on the bully of their youth. But is revenge the real reason for Jason wearing a gown to the prom? Or could Timmy be in love with him?  Christmas in July- Straight-guy Sam spends a weekend in a campground to entice his kids to hang out with him. His ex-wife cuts the weekend short, leaving him plenty of time to hang out with Larry, the gay man next door. Beer and Larry’s mildly dominant personality leads them into his camper. And then his bedroom.   Come on Down- While fooling around with Caylin, James has a flashback to a gay experience when he was younger, prompting her to arrange a threesome with an old friend. How far will James go with another man this time?  Gay Greenhorn on the F/V Lost Agnes- Carson travels to Alaska to try crab fishing, but life on the boat is too much for him. He meets Artie, a closeted deckhand, and they fall hard for each other. When life on the Bering Sea threatens to swallow him up, Carson returns to Georgia, to the life he knows. But can Artie live without him or will he be forced to give up life on the Lost Agnes to live in Carson’s world?

Love and a Hate Crime- Thad is twenty, but he’s slow. When bully Jimmy tells him to “fuck up the queers,” the gay couple in their 60s down the block, Thad trusts that in return, Jimmy will leave him alone. He breaks into their house and witnesses the couple making love, arousing and terrifying him. What will he learn about himself? 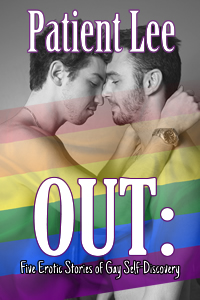 "The worst day of my life," Sam said, shaking his head. "We were at a picnic with Kayla's high school friends at one of their houses. This is, like, three years ago. Everybody's kids were there and everything. Tons of food, a keg of Sam's Summer. It was a great day.
"Kayla and the girls were in total bitch-fest mode, drinking Arbor Mist by the Solo cupful and complaining about their husbands. Most of the guys had gone to the garage to check out the guy's new hot rod he was fixing up. There were kids running around all over the place, and I had to make a phone call to work, so I went into the guest room to find some quiet."
Ignoring the situation in his shorts, Sam stoked the fire and grabbed the last two beers out of the cooler.
"What I didn't realize was that Tom was staying in the guest room."
"You didn't knock?" Larry asked, the corners of his mouth turning up in amusement.
"Nope," Sam said. His lips popped together on the p-sound. "One of the kids had hosed Tom's shorts with an entire red juice box, so it soaked right through to his skin. He'd gone in to change, and I barged right in."
Larry chuckled. "I'm guessing your wife saw more than you looking at her naked friend.” He didn't try to hide his amusement. Or his hard-on.
"You would be guessing correctly. We all knew Tom was gay. He came out right after high school."
"Did you know him then?" Larry asked.
"No. I met my wife in college. They'd been friends since childhood. Anyway, I walked in, and he was naked. I'd never been attracted to a guy before, but I was hard enough for him to see it through my jeans before I could even apologize for barging in. It was ridiculous. Horribly embarrassing."
"Ooh boy," Larry said. He could see where this was going, but he let Sam tell it.
"Yeah. I expected him to tell me to get the fuck out, but instead he told me to close the door. When I turned back, he was hard and huge."
"Just how I like 'em," Larry said with a chuckle. He was drunk, and he knew it. The thought that he needed to watch his mouth crossed his mind and quickly flew out. It had been a long time since he had a friend, never mind someone to flirt with. Flirting. Fucking great. I'm forty-four years old, not fourteen.
"I just kind of froze there, staring at him. I must have licked my lips or something because he understood exactly what was on my mind. He walked right over to me, pinned me against the door, and kissed me."