Out of the Shade

Faeries that carry katanas and guns instead of sprinkling magic dust and granting wishes. Dragons that reanimate the dead. Drug-crazed goblins terrorizing neighborhoods. Illegal demons attempting to conjure the alter ego of an Egyptian goddess.

Sounds like something out of a nightmare, right? Wrong. It’s my everyday life.

Welcome to the Shade, where all the creatures of myth hang out and where I, Detective Gabrielle Tate of the Supernatural Task Force, police them. My partner is AWOL and my sexy dragon boss is leaving nothing to chance as we deal with goblins high on Escape and a serial killer—or worse, a nest of rogue vampires—leaving the drained corpses of faeries and cops all over town.

And then there’s the psychotic demons trying to conjure the goddess Hathor’s alter ego, Sekhmet, to destroy humanity. As a faery and direct descendent of Hathor, I’m eager to manifest her power and use it to combat evil. At the same time, I need to learn how to control the accompanying bloodlust. How? By taking lessons from the charismatic leader of the local vampire clan, of course. If you thought the mean streets of Detroit were tough, you’ve never seen the Shade. 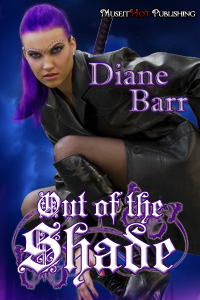 Out of the Shade

I wasn't usually afraid of the dark, but creeping into the damp dark basement of the warehouse started to seem like a bad idea.

We descended the chipped and crumbling cement stairs slowly, our backs against the rough surface of the walls. While the leather from the slayers’ jackets slid quietly, my STF vest caught on each imperfection of the wall.

The disgusting stench of mold, putrid potatoes, and decay assaulted us as we stood shoulder to shoulder on the basement floor. The slayers fanned out in front of us, Jett, Starr, and I stood three paces behind them. The remaining members of Starr’s team were stationed upstairs in various areas and at the exits, so none of the rogue vampire could leave.

Thin, dull beams of light full of dancing dust particles, streaked the air where they escaped from the confines of the warehouse upstairs. I stopped walking, one foot raised to take another step, when it felt like the whole space took a deep breath. The slayers made a slight hesitation in their progression forward, which alerted us to an impending attack.

I placed my raised foot down and moved my katana in a figure eight. Slowly, I moved my left hand with my gun at shoulder level, as my eyes tried to adjust and see into the dimness.

Tia looked back at me, her eyes reflecting yellow. As she blinked, the attack came from our right side, pushing Tia into her sister, and then Starr against me. As she careened into me, my right foot bracing us, I brought my katana down, slashing off the ear of our attacker. He hissed, his hand full of blood as he moved it from the wound to his mouth, making a slurping sound. Starr pushed off me, spinning around and moving her left arm backward, slashing off the vampire’s head.

The spilled blood provoked the remaining members of the nest from the deepest shadows. The slayers charged them, their swinging swords whooshing through the air. The distinct shunk sound reverberated around us as steel met flesh and bone.

A vampire flew at me, a quick flash as he passed through a beam of light the only warning I had. My katana sliced through his chest, and I ended up with my fist against him where it held onto the scabbard. The vampire’s fetid breath hit my face as he opened his mouth wide.

His teeth chomping together barely missed my neck as I pushed him away. I jumped back, freeing and swinging my katana at him. This time, I held my blade at a slight angle, and it got caught where his shoulder meets his neck. Even in his muddled brain, I could see him thinking that it’s not every day your meal falls onto your plate twice, within minutes of each other. I lifted my left foot and side kicked him, my katana pinged and swung at him, like his head was a baseball. His head bounced off the chest of a vampire and hit another one smack in the nose.

This vampire's hiss and scream were muffled by the mouthful of gore he received. He mewed at me as I prepared to swing, but my arm was grabbed and I almost lost my grip on my katana. I kicked backward, the heel of my boot smacking into someone’s shin. With my left hand, I drew my gun.

The handhold soon went to a bear hug from behind, and I threw my head back, screaming with fear and rage that I had let myself get caught.

“Ow,” someone yelled, when the back of my head cracked into their nose.
I bent forward, landing in a crouch, my knees ready to lock as I was about to flip whoever had a hold of me over my back. “Let me go,” I screamed at the top of my lungs, using all my might and strength. My tattoos surged, and my forehead pulsed. The grip around me relaxed as its owner went flying through the air. I crouched again, my gun drawn, pointing at my attacker, while I tried to catch my panicked breathe.