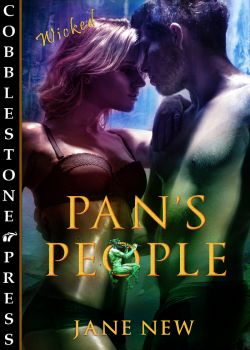 “This was supposed to have been our honeymoon,” snapped Emma. “Whose insane fucking idea was it to travel around Eastern Europe in an ancient fucking campervan anyway?”

“There's nothing wrong with the van.”

While Emma had shopped for her dress and organized caterers, invitations, and all the many facets of a wedding, Matt had spent months lovingly restoring his old camper, making it ready for the trip. He'd rebuilt the engine, had the seats reupholstered, and installed a gas-powered fridge and a new gas stove with two burners. He'd even bought a brand new, queen-sized mattress. Although it took up a lot of space, they'd both agreed it would be worth the investment.

“Nothing wrong that we wouldn't find in a halfway decent hotel room.” She hated fighting, but she was coming to the end of a very long day. “What I wouldn't give for a hot bath right now.”

“You said you wanted to do this. You said you loved the idea of just wandering for a couple of months, being gypsies, going where the road led us.”

“That was before I knew we'd end up completely lost in the back of beyond somewhere.” She wanted to cry, or scream, or hit something. Or someone. Preferably Matt.

“You're supposed to be the navigator,” Matt pointed out.

“Blame me! Go on, just blame me. Typical fucking man. None of this was my idea.”

She crossed her arms in front of her chest, stared out the window, and tried to stop the tears from rising. She knew this wasn't really about being tired and lost. It wasn't even about Matt, her wonderful husband who really did love her far more than she deserved. It was about her need to fight back, to assert herself, to refuse to be bullied or coerced into something she didn't like and didn't want to do. That hideous ghost from her distant, dreadful past always rose up to grab her when her resistance was weakest, as it was now.

“Give it a rest, Em.” Matt drove the van over to a small layby on the edge of the road. “I don't want to fight, love. We're both tired.”

Emma sighed and rubbed her tears away with the heels of her hands. “I need to work out where we are. I'll get the map out.”

Although it was still summer, daylight was fading fast. They could sleep in the van, of course, but they'd promised themselves a proper bed tonight and a good, long soak in a tub if possible. Even a shower would do. Although they had plenty of food left and even some excellent, Eastern European wine, there was only about enough drinkable water for their next cup of tea, if they were lucky.

Matt had chosen an excellent place to stop. The dense forest thinned out a little, and a steep slope fell away from the road.

“Come on love; let's stretch our legs for a few minutes.”

They walked, hand in hand, to the edge of the parking bay.

“Under other circumstances, this would be truly spectacular,” said Emma, gazing out at the panorama. Range after range of jagged mountains faded into the distance, their peaks brushed with gold by the setting sun. Thick forests covered their flanks, and in places, they saw a road, winding between the trees.

There were no houses, no villages, no towns.

Emma leaned into Matt's side. She was a tall woman, but he towered over her. One of the many reasons she'd fallen in love with him was that he made her feel small, and delicate, and dainty instead of the solidly built, quite ordinary woman she believed herself to be.

She knew women didn't swoon when Matt walked past. Some people might have even called him plain, or worse. He was a big man, well over six feet tall, broad in the shoulders, and perhaps he carried a bit too much weight around his middle. His nose was crooked, and acne scars pitted the skin of his face. He had a great deal of body hair, and she'd noticed looks of disdain directed his way when they went to the beach. But she liked his fur, and she secretly thought of him as her bear, her teddy bear who kept her warm and safe each night.

Matt wrapped one muscly, hirsute arm around her and pulled her in close to him, just as he always did. She sighed, enjoying his nearness.

“We could sleep in the van again, I suppose,” she said. “At least this place is beautiful. It would be lovely to wake up here in the morning.”

“That's what I love about you,” answered Matt. “You always look on the positive side of things.” He kissed the top of her head. “I'm not giving you much of a honeymoon, am I?”

She turned to face him, and he put his other arm around her as well.

“It's not your fault,” she said, their argument forgotten. “I said to take that last turn.”

She leaned against his chest. She heard his heart beating, strong and solid, just like him. Her beautiful husband, who was now running his hands up and down her back. She was still getting used to the idea of marriage, coming to terms with the fact that this wonderful man loved her and had promised to spend the rest of his life with her. She raised her face for a kiss, and felt his lips—warm, sweet, and tender—on hers. She loved the feel of him, the taste of him, even the smell of him, despite the fact neither of them had seen the inside of a shower cubicle for several days.

A little thrill raced through her.

She tried an experimental touch of her tongue on his.

He ended the kiss and pulled back. “My insatiable wife”—he laughed—“and how I love it too.” He kissed her again quickly, not giving her the chance to kiss him back, and once again scanned the scenery.