Toby’s best friend, and unrequited love, Molly Harper has gone missing. Molly’s boyfriend, “Spud,” thinks he knows where she’s been taken: the mysterious Zombie High, where Spud’s father just happens to be in charge of the top-secret medical facility famous for its work rehabilitating teenage zombies. Armed with blueprints, passwords, keys and codes, Spud and Toby are ready to make an all-out assault on Zombie High and rescue their fair Molly. There’s just one problem: Toby and Spud are the biggest wimps at Cypress Cove High and need some muscle along for the ride in case any of the zombies get loose. That’s where Boner and Zack come in. Two of the football team’s biggest players, the jocks are easily conned into joining Spud and Toby on their fictional “panty raid” the minute Spud calls them “chicken” for not accepting his challenge to spend the night at Zombie High. When Zack and Boner show up to accept the challenge, however, they don’t come alone; they bring their two girlfriends, Lilac and Haley, along for the ride. With events spiraling out of control and zombies lurking around every corner, will Toby and Spud even survive their night at Zombie High, let alone rescue Molly? 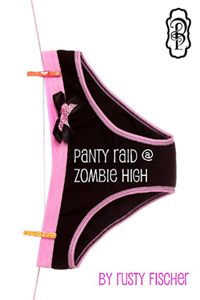 I smile and think to myself, “He’s actually done it. That mad genius Spud has actually shoved spaghetti sauce – and garlic bread – in the jock’s faces and conned Boner and Zack into a real, live panty raid at zombie high, all without the threat of physical violence.”

Then I watch Zack’s eyes bulge and he nudges Boner back.

I look over Spud’s shoulder to see Dean Crisp wading through the crowd, breathing a sigh of relief because it’s almost over now.

Then I turn back just in time to see Zack’s fist flying straight.

At the last second, just as he pivots to put all his 230-pounds into it and separate my nose from the rest of my face, he slips on a dab of cheese sauce and goes down, hard, but not without grazing my jaw with a glancing blow from his ham-sized fist.

It sends me back into the crowd, which is finally cheering now that they’ve seen some actual violence, and shove me back in Zack’s direction so he can wail on me some more.

But Zack is already headed for the hills, Boner hot on his trail, as Spud drags me into and out the other side of the crowd, narrowly missing Dean Crisp’s attention as he yanks me all the way back to Table # 27, where the rest of the Chess Club geeks are eager to pat us on the back.

I’d love to celebrate with them, but my jaw feels like it’s made of broken glass and my ear’s ringing so loudly, I can barely hear what our friends are saying.

Besides, standing up to Boner and Zack was the easy part.

We’ve still got that panty raid to worry about.

And, you know, the actual zombies…