Before Lovers: Have you ever seen someone and had the strangest feeling you’ve met before? A chance meeting brings Paul and Calvin together. The evening starts with a drink and quickly develops into something more. But strange things happen to they get intimate; a bizarre transformation which leads Paul to consult a psychic. What he discovers will change the way he thinks about life, and Calvin, forever more.

Ryan: What happens to Dane after his Aunt Beatrice is killed in a car accident defies belief. He hires Ryan to be his house keeper and maintenance man, but even after they fall in love, how can two men alone cope with what they are about to learn? And no one should ever have to make the decision they are forced to make. Not without all the answers.

Stranger Things: Too many people say there’s no magic left in the world, but Morgan Berry has the good fortune to meet Reginald Batt, who proves to him there’s magic everywhere if you know where to look.

Unexpected Ending: When Rob sees a handsome stranger walking along the edge of a quiet country road, he stops to offer assistance. Duke won’t be able to make it into town before the storm hits. Since Rob lives alone, he invites Duke to stay the night at his place. In the morning, they’ll head into town. The simple invitation is made out of old-fashioned country hospitality, yet it will change Rob’s life forever. 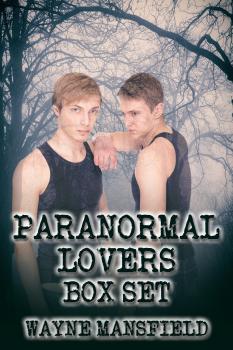 The days and nights that followed were spent in blissful happiness. Ryan went about his business as usual, and wouldn’t hear of quitting, and Dane followed him around like a puppy, happy to be in his presence whether they conversed or not. And he’d taken to leaving little presents around the house for Ryan to find -- a flower on his pillow, or an “I love you” note on his dusting rag.

The only thing marring this idyllic existence was the frequency with which Dane saw shimmers. And they were getting bigger. He’d catch them out of the corner of his eye, but when he turned to look at them face on, they’d disappear.

“What are you?” he asked the darkness, but always too late.

Then one evening, he was lying in bed after making love to Ryan. Ryan was already asleep, and Dane’s eyelids were growing heavier and heavier. At one point they flickered open for a fraction of a second, but it was enough time to catch something moving in the shadows at the corner of the room. Suddenly, he was wide awake. He watched a dark figure move from the shadows to the door.

He waited till it disappeared into the hallway before slipping out of bed to follow.

“Hello,” he called as loudly as he dared. He didn’t want to wake Ryan.

With his heart pounding, he followed the figure as it glided down the hallway, through the kitchen to the sunroom. He watched it through the open French doors as it took a seat, waiting for him.

He stopped at the doors and peered into the dark room, lit only by the faintest scrap of moonlight filtering in through the glass of the outer windows.

He wasn’t the slightest bit afraid. He felt no threat. “Who are you?”

“I realise it’s a bit difficult to see in this light, but who do you think it is?”

She laughed again. “It must be rather shocking from your point of view. Take a seat and I’ll explain.”

Dane dropped into the nearest seat, his eyes fixed upon her dark figure.

“I’ve been keeping an eye on you. And on that nice young man you’re sleeping with.”

And again, she laughed. “Don’t be embarrassed. I’m happy for you. It’s about time you found some happiness. You’ve worked damned hard for it and you have my full blessing.”

Dane stuttered, his mouth and tongue stumbling over a whole slew of words that wanted to come out. “Um, er, thank you.”

“Quite all right,” said Aunt Beatrice. “I’m pleased to see you’re taking care of the house.”

“I’m aware of that. I was being polite.”

Dane really didn’t know what to say this time, until he heard his aunt chuckling. “Aunt Beatrice! You almost had me there.”

The laughter quietened. “Let me get to the reason for my visit. My time is short. I’ve dilly-dallied about too much. It was enjoyable being here with you and Ryan, being back home again. I quite forgot the time and have -- uncharacteristically, I hasten to add—left things to the last minute.”

“Please don’t interrupt. I need to get this out.”