A dark cloud hangs over Torrent, master of storms, after his lover leaves him in a fit of rage. Unable to contain himself, Torrent horribly wounds a villain and is suspended from The Elite, the team of heroes he belongs to. After attending anger management therapy for angry heroes, he is readmitted to the team. His new partner is Redwood, a young man who controls plant life. Their love quickly blossoms, only to be threatened by the worst kind of betrayal. Dangers from villains and other heroes confront to two. Can the new lovers survive Passion’s Storm? 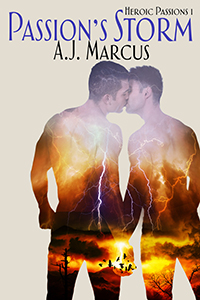 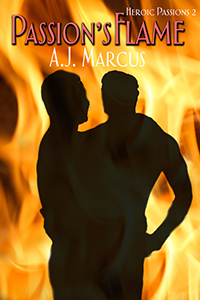 The door slammed so hard that several pictures fell from the wall and the dishes in the kitchen shook on the drying rack. A short black-haired man stomped into the small apartment, his dark face livid in rage.

“I can’t take it anymore!” He slammed his fist into the nearest wall.

The door reopened. “Burt, wait,” the tall blond man in dark blue spandex cried out as he entered the small apartment. He threw his mask onto the coffee table.

Burt turned and glared at the other man. “No, Daniel! No more waiting! No more of this! I can’t take it anymore!”

Dan reached out to his lover. He fought to keep his voice steady, but tears began to flow. “Come on, Burt, we’ve been through so much and we’ve always pulled through just fine.”

“Yes, we’ve been through too much. I’ve been kidnapped by every two-bit villain and homophobic asshole out there who wants to make a name for themselves. Last year it was Dr. Whatshisname, the guy with the mind control ray. Then the Evil Eight got me and tortured me for nearly a day before you and your Elite buddies found me. Last month Freddy the Freak nabbed me on my way home from work, and we never did figure out how he knew where I worked. Then today the Midnight Widow caught both of us in her webs.”

“I thought you liked being with a superhero?” Dan stood there with his hand still outstretched, heartbreak heavy in his voice. He wished he could be stronger, but as Burt was going on about, it had been a long day and they were both at their wits end.

Glaring, Burt ignored Dan’s hand. “When it was our little secret it was great. But nowadays every villain out there seems to know that Daniel Robinson is Torrent. It’s like you took out a listing in the super villain phonebook so they all know who you are and where to find you. I mean us! Us! It’s not just about you. It’s about me, too.”

“Everyone’s got that problem right now. Someone’s been leaking information about us out onto the internet. Even Captain Valhalla’s wife, Linda, was kidnapped last week.”

“You know I really don’t care about Captain Valhalla right now.” Burt looked at the ceiling and let out an exasperated sigh. “In all honesty, if I never see another superhero it would be fine by me.”

“Burt, you don’t mean that!” Dan started toward his lover.

Burt held up a hand to block the movement. “Yes, Dan, I do!”

Dan’s pulse quickened as something deep inside him tore. “But, Burt, I love you.”

The other man pushed past him. “The sad thing is, Daniel, I love you, too. I just can’t deal with your lifestyle anymore.”

As the door slammed again, another picture fell from the wall. Dan watched as the photograph they had taken on their last vacation, one that showed the two of them with big smiles and arms around each other, shattered on the oak floor.

Dan collapsed on the small brown sofa that dominated the wall facing the door. He stared at the door while tears flowed down his face. He remembered the first time he saw Burt. It had been at a small coffee shop down in the gay village. Something in the man’s smile and his unruly black hair captured Dan’s heart from that first glance. Their first date had been two days later. They’d gone to see the latest Indiana Jones movie, and it became their show. Dan grabbed one of the large fluffy green pillows off the couch and hugged it to his chest, as he recalled the first time they made love, right on that same green couch. It was the same night that Dan had told Burt his secret. Burt laughed at him until Dan created a rain shower over the bed to wash them both off. That night Burt said it didn’t matter to him, he loved Dan and the fact he was Torrent didn’t change anything.

Thunder rolled outside the apartment window. Dan didn’t care. The love of his life, the man he’d lived with for the past five years, was gone. His life was now as dark as the storm clouds outside. He let the tears and rain pour from his torn soul. He hoped the thunder would drown out the sounds of his sobs as his heart broke into the green pillow.

A Knight for the Archaeologist (MF)
Adonis Devereux
In Shelf
$2.99