Passion and Plaid - Her Highland Hero

This light-hearted, sweepingly romantic, full-length novel continues the story of Gavin Macgregor, the brave Highlander who left home to fight in the Bonnie Prince’s final war, and Kenna Moore, the girl he’d loved since he was a boy, who saved Gavin from peril even as he stole her heart.

If hearts are meant to be together, nothing will keep them apart...

Since they were children, Gavin and Kenna knew they were destined for each other. After almost losing Kenna in an arranged marriage to a crooked Laird, Gavin takes her north from Edinburgh to return to their hometown in the Highlands, in the hope of beginning their new life together.

But, when a small town mayor plots to destroy his own village, Kenna is torn between remaining with the man she loves, and helping the people of Mornay’s Cleft – what her heart knows to be right.

Can Kenna’s wit, Gavin’s courage, and their love for each other overcome the greed of a crooked mayor? Will Kenna fall back into Gavin’s arms, or will she fall much, much further?

With breathtaking romance, a hero and heroine who will do anything for each other, and a colorful cast of supporting characters, “Passion and Plaid” is your chance to fall in love all over again. 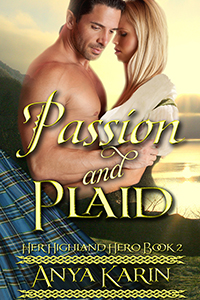 Passion and Plaid - Her Highland Hero

“When I say to you ‘wedding’, Kenna, what is it you see?” Gavin looked across the top of the saddled horse, smiling at his bride-to-be, who couldn’t be more pleased. He walked around to the wagon they were pulling and looked in on Sheriff Alan, who the two of them were taking to Glasgow so he could stand trial. After that, they were going to Fort Mary, the place the both of them called home, where they were to be married.
Gavin very much liked that idea.
“Oh, I dinna know,” Kenna said smiling. “Just something small, supposing my Da and Ma would want to go. Your father too.”
In the back of her mind, she had images of a tremendous royal affair, a hall decked in white sheets and colorful plaids to mark the mixing of their families, and a drum, fife and pipe band to play as they danced. She imagined a big, swirling, poofy-skirted gown, and on Gavin, a fine Macgregor great-kilt with a huge sash, brooch, and a beautiful sporran that she’d make for him before the wedding. With their friends all around, John and Lynne, Red Ben and Alice, Rodrigo, Elena and of course Olga, the minister would say solemn words in front of the entire kirk congregation; they’d both take very solemn vows. Then, when it was all finished, Gavin would lean in and kiss her, and suddenly the whole place would explode into music and dancing and drinking and fun.
“You’re sure about that, wee li’l lass?” Gavin said with a smile. “Looks like you’ve something else in mind, aye?”
“No,” she said and laughed. “No, just a small ceremony. I canna imagine a big to-do.”
Behind them, in the wagon into which they’d packed a few supplies – and one very angry Sheriff Alan, who just wouldn’t stop sputtering and swearing – a crash interrupted their tender chatting.
“I better go see what he’s done,” Gavin said, but couldn’t tear himself away from Kenna and her big, semi-tamed mop of red hair, or the tiny freckles that dotted her cheeks and the bridge of her nose, or her big pale-blue eyes. “You know, actually, he’s probably just fallen over again and is making his best at a big scene to get attention.”
He stepped closer to her, she took his hand in hers and squeezed. “I canna believe this is all happening, Gavin. As a wee girl, I dreamed about it, but I didn’t even know you then. Not really, anyway. And now, here we are, about to go home and...”
“Aye,” he said sliding his arm about her waist and pulled her to his chest that was bare, save for the sash of his kilt. A few drops of water remained from the bath he’d just taken and she smelled the tiniest hint of cologne that Alice Black gave him to use, saying that it would make him seem more rugged and manly. She wasn’t quite sure how he could be any more attractive than he already was, but the scent was nice anyway. Curling her fingers against Gavin’s chest, Kenna purred softly and kissed his collarbone. He slid his hands up her back, and his thumbs along either side of her face.
“I canna believe it’s really happening either,” Gavin said. He stared straight into her eyes, straight into her soul, Kenna thought. His gaze warmed her and the two thumbs brushing along her cheeks made a grin creep across her face. Suddenly, she began to blink, fighting back tears she didn’t want to ruin the moment. “I canna believe it, but now I think I have to, because you’re right here and so am I. Nothing better has ever happened so long as I’ve lived, Kenna Moore.”
With that, she couldn’t hold it anymore, not for one second longer. Kenna threw her arms around Gavin’s waist and hugged him so tight that a moment afterward he began to act like he couldn’t breathe. The Sheriff made another whining noise and another crash, but they both ignored him, lost in their own little world.
“I’m choking you am I, Gavin? A wee girl like me keeping big, strong Gavin Macgregor who stole and stole from the English, from breathing? Gavin Macgregor, who every single Scot in Edinburgh sees as a mythical hero is being smothered by a tiny girl?”
“Ach! You’re no tiny girl! I’ve seen you fight!”
They held each other for a moment longer before Gavin bent his head to hers and kissed Kenna first behind the ear, and then on the jaw. As he ran his fingers up the back of her head to hold her close, Kenna felt his lips part around hers, and gently caress her full bottom lip. When he pulled away and gave her a gentle, playful little nibble, she let out a giggle and then squeezed him again before she let him go.
“I’ll check Alan,” he said. “And then we’re to be off. It’ll take us three days to Glasgow and then another couple to Fort Mary since Glasgow’s a wee bit out of the crow’s path. I dinna think you’d mind, but I should tell you now – after you fell asleep last night, I invited John and Lynne and all the rest of them to come up in a week or so and stay until the wedding.”
“Good!” She said, smiling broadly. “I wouldna have it any other way.”

Morning turned to noon, and a quick lunch of bread and cheese turned into a long lounging on a blanket, with a lot of hand holding, and smiling and sweet nothings whispered into ears. By the time they got back on the road north, Alan had become so irritated that even bound up, he’d managed to start the wagon rocking quite dangerously back and forth by throwing himself against the walls. Gavin went to make sure he wasn’t actually hurt before they kept on the road.
“Did he do anything bad?” Kenna asked as Gavin threw his leg over his horse and they began to trot.
“Bad? To hisself, you’re meaning? No nothing of the sort, just his normal complaining. He did try to make me stop off and buy him another square of chew.”
Kenna looked at him in disbelief and laughed. “The man we’re taking to court, he presumed to have you stop off to buy him tobacco?”
Gavin nodded. “He had a little tiny bit of a plug left with him so I gave him that and told him if he deigned not use the cup I gave him as a spittoon, that he’d go to the Glasgow magistrate without any more of his stuff. I expect that’ll keep him from drooling all over our things.”
“You, Gavin, are a very wise man, I’ll have you know.”
With a somber, almost alarmingly serious glance to the horizon, Gavin nodded slowly and said that he knew he was before breaking out into one of his infectious, easy grins that made Kenna punch him in the arm.
“He’s handsome and witty, this one,” she said. “I wonder if he’s got any other secrets he keeps?” She turned to him with an impish look on her face.
“Aye, he does, but those are secrets to be kept until we’re wed.”
For a moment, Kenna did not register what he’d said, but as soon as she did, and turned back to him to feign offense and maybe hit him on the arm again, Gavin had already sped his horse to a trot, bumping the poor sheriff over a couple of humps in the road. Kenna just shouted that he had a naughty mind, then kicked her horse, took a deep breath and let it out in a contented sigh. 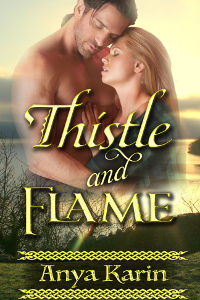