Grant Sulivan has been alone since his lover died in a car accident. He’s moved into the mountains outside of Colorado Springs, Colorado. When he decides his new cabin needs a porch, he spends time interviewing the local handymen to find the best one for his project. He knows he’d found the right guy to build his porch when he meets Dane Middlefield. As Dane settle into the project, Grant feels a growing desire to get to know him more. When an accident happens, Grant is forced to take action to help Dane, and the flames that have smoldered between them blaze into pure passions neither of them expected. 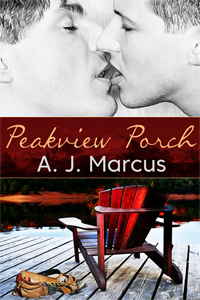 Grant Sullivan walked out the back door of his cabin and down four stairs to the concrete pad that served as his back porch. Before him, Pikes Peak rose majestically to the east, barely visible above the forest of ponderosa pines and quaking aspens.

“I don’t think I’ll ever tire of this view,” said his best friend, Stephanie Wells. “The view alone is worth what you paid for the property and the cabin.”

“It was one of the major selling points.” Grant grinned as he recalled the real-estate agent’s over-the-top unveiling of the view. “But I want to do something nicer with the back yard to really bring this all together.”

“A porch,” Stephanie suggested. “You need a porch. Somewhere you can put a barbeque grill and a few chairs. Make it a nice covered porch, and you’ll add value to the place.”

Grant turned and looked at the cabin. The plain backside of it did look like it needed something. There was a nice porch on the front. “You might be right. I’ve still got a little bit of cash left. I wonder how much a porch will cost me.”

“What do you care?” Stephanie walked over and plopped down in one of the Adirondack chairs Grant had bought the previous day and placed strategically in hopes of watching some of the deer and other wildlife he’d seen from time to time since moving in two weeks earlier. “You’re sitting pretty right now.”

“And to keep sitting pretty, I’ve got to start showing some restraint.” Grant settled himself next to her. “Anyway, it might be a lot of fun finding someone who’s willing to come all the way out here and do construction.”

“Oh, please. I bet half the crazy mountain men up here fancy themselves handymen and would love the opportunity to build something for you. The hard part is going to be finding someone who can actually make it look good.”

“I wonder if my better bet is to start by looking online. Or do I go to the hardware store and see what I can find?”

“You’ve moved out into the sticks, not left the twenty-first century. Start online.” Stephanie paused and pointed. “Look.” She dropped her voice to the barest whisper. “I think that’s a deer coming this way.”

Down between the trees, a large mule deer buck walked up the slope toward the cabin. Itssix-point rack was still covered in velvet. Grant didn’t move, hoping if he stayed still in his chair, the magnificent creature wouldn’t be bothered by them sitting there. It turned toward them and flared its nostrils, but didn’t step up its pace or turn and run. The deer just calmly walked through the yard and disappeared past the end of the cabin.

Grant let out the breath he’d been holding.

“Oh. My. God!” Stephanie squealed. “I can’t believe that just happened. Do you have a lot of deer up here?”

“I’ve seen a few. Never that close—it was what, twenty…thirty feet away?”

“I don’t know. You’re asking me? Hell, I didn’t even get a picture of it. I can’t believe that just happened.”

“It’s one of the big reasons I moved up here.” Grant shrugged. “I needed a change, and I wanted to get back to nature.” A wave of sadness hit him, the first one in a couple of weeks. “I needed somewhere I wasn’t seeing Neal everywhere.”

Stephanie touched his hand. “I think he would’ve liked it up here. He was always the back to nature type.”

“More than I am?” For a moment Neal’s face flashed in Grant’s mind. It was right after they’d met, and they’d gone hiking in Garden of the Gods Park. Neal had always been alive when they went hiking or camping. He’d been so handsome and full of life, right until the car accident that had taken his life nearly two years earlier. He swallowed. “I miss him.”

“I know. But I think he’d approve of you moving on with your life.”

“We’d always talked about getting a cabin up this way. We just couldn’t afford it before.” Grant swallowed again. He hadn’t cried over Neil since he’d moved out of the apartment they’d lived in for seven years. Evidently the new place had few ghosts for him. Grant surged to his feet, wiping his eyes with the back of his hand. “Come on, I think I’m ready to go start dinner—that’s why you came up isn’t it?”

Stephanie stood. “Sure, can we come back out here to eat? I want to see if Mr. Big rack comes back through and brings friends.”

“Sure. We can do that.” Grant strolled toward the cabin. The sadness he’d felt eased as he walked up the steps into his home. Even in the short time he’d lived there, it had become his sanctuary, the place where the problems of the past couldn’t impact him as much as they had in town. He paused on the top step and looked back at the brown and gray top of Pikes Peak. It would be great to have a nicer place to sit and enjoy things up here most of the year.

What the Heart Thinks (MM)
Vivien Dean
In Shelf
$3.99
Tweets by
sirenbookstrand