He hides in the shadows...waiting...

Reeling from tragedy, young and talented, Christine Daaé finds herself employed in the chorus at the Paris Opera House. A dark figure draped in a black cloak visits her at night, touching her, initiating her in the ways of pleasure. But, this innocent flirtation with a dangerous monster soon turns hellishly hot, as Christine defies him and submits to a thrilling, yet shocking, form of punishment.

Some wishes do come true...

Punished for the smallest of offenses, Princess Pari finds herself naked over the emperor's knees. She's also at the mercy of his jealous wife, who kidnaps and sells her into slavery. Her only hope is a magic lamp and three wishes that promise salvation.

Kelly Eaton’s relationships with men are complicated, leaving her no choice but to seek self-gratification from sex toys. Unbeknownst to her, she is being observed by an unseen entity that wants to be in her life, in her bed, and in all of her hungry orifices. 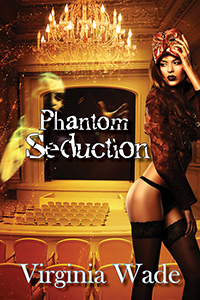 I’ve known tragedy. I’ve experienced suffering. My mother died when I was six. This devastated my father, a famous fiddler, and he took to the bottle and drowned his unhappiness, until his friend and patron, Professor Valerius, generously opened his home to us in France. It was there, in the elegant, yet drafty, chateau that I first heard the stories about the ‘Angel of Music’.

Papa would tuck me into bed at night and tell me about a blue-eyed, blonde girl named Little Lotte, who was visited by the Angel of Music. This angel would sing to her in a divinely beautiful voice, keeping her company whenever she was lonely. It was at the professor’s house that I met Raoul, Viscount of Chagny, and he too would listen to my father’s diverting tales. Raoul and I became friends, running and playing in the idyllic countryside, chasing chickens, and hiding in hay barns.

After sickness befell my poor papa, I lingered by his bedside, watching him weaken by the day. He told me, “Christine, when I’m in heaven, dear child, I shall send you the Angel of Music. You won’t be lonely, my love. I will…always be with you.”

I’d cried, as he drew his last breath, and grasped his hand, while tears ran down my cheeks. I continued on at the chateau with the professor’s widow, Mamma Valerius, until sickness and a feeble mind forced her to her bed. Being eighteen, and an accomplished singer in my own right, I was given a job at the Paris Opera House.

Up until this point in my life, I had been like a weightless cork, tossed about on a dark and stormy sea. The new job represented not only freedom; it fostered my independent spirit and peaked my desire to make something of myself. My fate was in my own hands now.

I’ll never forget the first time I saw the Palais Garnier situated on the Boulevard des Capucines. I thought the monolithic structure looked like an enormous marble castle set amidst the splendor of Paris. Its Baroque sumptuousness could only be described as awe-inspiring. Madame Giry, a tall, serious looking woman, with an authoritative aura, led me down the grand foyer. She carried a set of keys that clinked as she walked.

“This will feel like home shortly, Christine Daaé. Once you get your bearings, the opera house won’t frighten you.”

I stared upwards and noted the painted ceiling. “It’s hardly a house. It’s more like a castle.”

“You’ll spend most of your time in the living apartments, my dear. I shall give you a tour so you don’t get lost. There are certain areas…you should avoid.”

A while later, I was introduced to Madame Giry’s daughter, Meg, who was a ballerina. She was shorter than me by at least three inches and blonde with pretty blue eyes.

“I’ll take over from here, mama. I can show Christine her room,” she offered pleasantly.

“Be sure to show her where not to go.” A strange look passed between them.

“Yes, mother.” Meg linked her arm through mine. “I’m so lucky to have a new pet.”

I giggled, surprised at my sudden, inexplicable bout of happiness. “What sort of pet am I?”

Madame Giry watched us walk away.

“Don’t let my mother bother you. She likes to smother and hover. It’s annoying.”

“How long have you lived here?”

That was a surprise. “In the Palais Garnier?”

“I have to warn you about some of the girls.” She whispered, “I’ll tell you which ones are the backstabbing bitches. We have several.”

I loved to gossip; it was a weakness. “I can’t wait to hear all about it.”

She beamed with eagerness, clearly relishing the topic. “You’ll get an earful then. There isn’t a lot to do when we’re not working.” We were in a lengthy, dimly lit hallway, with intermittent sconces. “The rooms on either side are for the band members.”

“None of your business, Louis.”

“Don’t be mean to us. Have pity on the brass section, will you?”

“You’re a bunch of scoundrels, and you know it.” She whispered, “All they do is drink and chase skirts.”

I giggled and glanced behind me. They had stopped walking, ogling us with peculiar interest.

“They’re used to pretty women, Christine, but you are truly lovely.”

Her praise was surprising. I had never considered myself pretty. I thought I was rather plain looking, with my long, shiny hair, brown eyes, and pale complexion. “That’s sweet.”

It was on the small side with a single dresser, floor mirror, and bed. The walls were painted white. “It’s…nice.”

“Don’t worry. We’ll search the attic to find something to decorate it with. A few paintings and a carpet will make it feel like home.”

I sat on the bed. “Where are my things?”

“They’ll be brought up. Come now. I have to show you around or you’ll get lost.”

The tour continued with the bathroom chamber, the ballet studio, the theatre, and another dark and forbidding looking hallway.

“This leads to the basement.” She’d stopped walking. “I can’t go any further. We’re standing over a subterranean lake, believe it or not. The opera house has a double foundation to hold water in case there’s a fire.”

A shiver went through me. It smelled musty and moldy. “Then let’s not linger here.”

Later that night, after I’d bathed, I sat on my bed and stared at the two paintings we had borrowed from the attic. One was a scene of a city street in the heart of Paris and the other of the countryside. These pretty little gems had been hidden under a drop cloth in the corner of a neglected and dusty space. Meg had been right. They made the bland room inviting, as had the faded red carpet we’d dragged down and beaten the dust out of.

I snuggled into the bedding and sighed. I had been worried my new life would be terrible. I’d already made a friend, and tomorrow I would start work in the chorus with eight o’clock rehearsals. Tiredness overcame me, and I drifted off to sleep to the muted sounds of musical instruments being tuned.

I bolted upright in bed, thinking a bad dream had roused me from a fitful slumber, but it wasn’t a dream at all. Someone’s singing had woken me. It sounded almost as if it were in my room. The soothing male voice sang a melody I had never heard before, and it was beautifully romantic and endearing. I scrambled from the bed and searched the room for the source, guessing that the metal grate in the corner of the floor must lead to wherever this person was. I got on my hands and knees.

“I know everything about you, because I’m the Angel of Music.”

Shocked beyond words, my hand went to my throat. “Oh, my gosh! Are you really?” Father had said he would visit me from heaven. “Is this a dream?”

I gasped. A tall, dark shadow stood in the corner of my room. Frightened beyond measure, I jumped onto the bed and dove under the covers. “This is a dream. It can’t be real.”

“I’m real. I won’t hurt you, Christine. I’m here to help you. You needn’t be frightened of me.”

I peeked at him from under the blanket. “You’re going to help me?” He was dressed darkly, and he seemed to be wearing some sort of mask.

“Of course. I’m going to teach you how to sing.”

“I already know how to sing.”

He drew near, sitting on the edge of the bed. “This is my opera house after all. I choose who the star will be, and I’ve chosen you.”

“I see and hear everything.”

“Not of my making.” His tone held a hint of disgust. “Her reign will end shortly. You shall replace her.”

I’d seen La Carlotta today, and I had been taken aback by her presence and beauty. I could never compare to a magnificent creature that oozed charisma and sex appeal. I wasn’t half her worth or talent. My spirits plummeted.

“This must be a dream. I’m no star, and there’s no Angel of Music.”

His hand was on my tummy; my body jerked in surprise. “I am very real, Miss Daaé. This is no dream. We shall begin your first lesson tonight.” 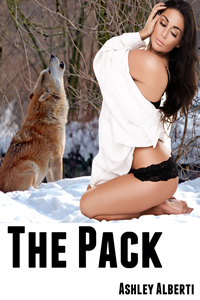