Pieces of Us (MM)

Leo Shelton survived a mass shooting, but his heart was broken that night in a terrible way. Coping with the aftermath has been grueling: he holes up in his apartment, doesn't sleep well, can't work. He goes to the recommended grief counseling, but while there, never opens up. He’s drowning in his own pain.

Caleb Hart can see Leo's pain. He grows concerned about Leo, knowing he must reach this tortured man, and he has an idea that might just work.

If Leo is willing to give it a try. Can Leo claw his way out of the sea of grief he's in? 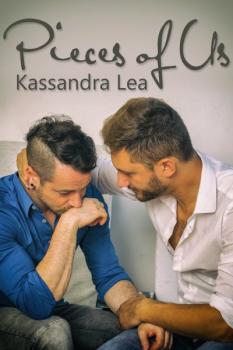 Pieces of Us (MM)

Hands shoved into his pockets, heart racing, Leo practically ran down the side of the road, head ducked. After meeting Nancy, he couldn’t get out of the barn soon enough, nearly tripping in the gravel lot as he made a beeline for the street. With his cell phone in his back pocket, it would have made more sense to ring up a cab and hitch a ride back to suburbia, but that meant confronting his fears yet again and Leo was tired.

I’ve done more than enough of that today, thank you very much. Yes sir. And to find out that Caleb is a cop? Why didn’t he tell me? Why does he feel the need to keep this from me? And why am I running?

The purring of an engine approached from the rear. Leo stepped farther off the side of the road, hoping to go unnoticed. But even as he wished for that, he could hear the vehicle slowing until it was crawling along at his side.

“Leo, what are you doing?” Caleb called out the passenger window.

Caleb sped up, pulling ahead and then swerving onto the shoulder, throwing on the car’s hazard lights. He climbed out, ready to confront Leo. “Please, Leo, tell me what’s wrong.”

Much to his surprise a bubble of anger found its way out of the cloud of panic, fear, and confusion, popping out of his mouth. “How come you didn’t tell me?”

Hands on hips, Caleb cocked an eyebrow. “Tell you what?”

Leo’s breathing grew shallow, his vision blurring slightly, a wave of dizziness sweeping over him. He halted, a hand to his head, biting down on his bottom lip. He may have heard Caleb saying his name, he wasn’t entirely sure, and someone may have been moving him, but Leo felt disconnected, outside himself. He lost track of time, focusing only on drawing enough oxygen into his lungs to keep from completely blacking out.

Now was not the time. He wasn’t a safe place.

But Leo was wrong.

As he slowly started to come out the other side of the anxiety attack, the world filtering back in, Leo became acutely aware of one thing. Caleb was sitting beside him, an arm around his shoulders, speaking calmly. They were sitting on a fallen tree, the bark rough and rotting. Leo was somewhat bent over, his hands hanging limply between his knees.

He may have made an incoherent mumbling sound.

Caleb kept up the act of rubbing his back, which Leo found oddly pleasant.

His cheeks were wet. At some point, he must have started crying. With the back of his hand Leo quickly wiped them away, uncomfortable with showing what he considered weakness in front of others. He preferred to keep his tears to moments of privacy, which even Leo had to admit, he had plenty of these days.