Sports rivalries are serious matters, and when Clarke meets Joe in a Philadelphia sports bar, he assumes they root for the same teams. The bartender all but leads them by the hand to get them together, and when the teams are “all tied up,” she makes it clear that if they left together, Clarke would be all tied up, too.

The power goes out just before Clarke makes it into Joe’s apartment, heightening his nerves, but Joe uses the blackout to his advantage, adding a blindfold, just in case, cuffing Clarke to the bed, and while he’s deprived of his sense of sight, introducing him to all kinds of painful pleasures: the scorching heat of molten wax, the freezing chill of ice cubes, and the sting of a hand, a flogger, and other toys.

But when the lights come on, will the infatuation hold once the Joe’s sports collection is revealed? 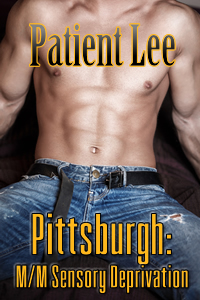 “Quite a game, huh?”
“Yeah. Great game, now that we’re tied up.”
Stella leaned in between the two of us, looked at me, and said just loudly enough to hear over the noise in the bar, “I know for a fact he enjoys that.”
He blushed an adorable shade of red, but I did, too. I was already a couple beers in, so I didn’t control my mouth. “How does she know that for a fact, huh? Did Stella Bella tie you up?” I tried not to grin too widely. I didn’t want him to think I was coming on to him. I was coming on to him, but I’d been shot down in an embarrassing blaze of dismay enough times to stay cool.
“NO!” He said it loud enough for our whole side of the bar to hear. “I drank too much one night, and she—”
“She tied you up?” I laughed, mostly from discomfort. Bondage wasn’t in my bag of tricks. Neither was hetero sex.
“No.” He snorted out loud. “She coaxed the story out of me. This bachelorette party was discussing Fifty Shades of Grey. I made a comment, and she didn’t let it go until I told the story.” He took a long drink, draining his beer. “I am so freaking embarrassed right now.”
The game resumed, and I let it go for a few minutes. Stella stepped over and poured him another glass from my pitcher. I raised an eyebrow, but she said nothing, grinning with a mischievous glint in her eye. Stepping around to the tap, she refilled the pitcher, and she spoke to him. “Did you tell him all about it? I bet he’d love to know. I think he’s your type.” She looked at me and gestured to him with her head. “He’s gorgeous, isn’t he, Clarke?”
I tipped my head. Was she trying to fix us up?
“Clarke, this is Joe. Joe, this is Clarke. I can’t believe you guys haven’t met here before.”
He had the same confused look as I did. “I usually work second shift, so I’m not usually here until midnight,” he said. “They got me on first shift this week.”
“What do you do?”
“Paramedic. I live around the corner, so I stop in a lot on the way home. Tonight, I just came to watch the game with someone other than my cat.”
“Ha! Same. I work during the day, but neither of my cats appreciate my obnoxious cheering. I’m in banking. Less exciting, but then again, so am I.”
The Sixers got a three-pointer, pushing them into the lead. Joe and I jumped up and cheered, along with the rest of the bar. He turned to me and gave me a deliberate high-five. Our eyes met for a moment, and a shiver ran through me. I tried to shake it off, but he was hot. And it had been a long time since I met someone. But was he gay? I wasn’t sure enough to risk it. Yet.
We returned our attention to the game, and I was grateful for the distraction. This guy was making me hard, and until I knew whether he was gay or straight, I didn’t want him to. The momentum had shifted to the Sixers, and they were up by eight points. Somebody across the room shouted, “Nothin’ like Philly sports. Nothin’!” The whole bar cheered, except Joe and me. We were busy feeling each other out.
Stella came around with bowls of popcorn. She put them down on the bar and stood there, looking from Joe to me and back to Joe. “What’s the matter with you?”
“What are you talking about?” I asked. “We’re watching the game.”
“I’ve done all the work for you two. If you blow this, it’s your own fault.”