Playing the Field: Tee'd Off (MM)

Greg Chennault has been a golf fanatic since he was a kid. When he was twelve, he managed to sneak onto a local golf course in search of a job -- there he met Trevor Johns, who taught him the sport. Greg caddied for Mr. Johns all throughout his high school years, and still recalls his time with his former employer fondly. His memories of Mr. Johns' young son Junior, four years younger than Greg, aren't quite as rosy. The boy annoyed Greg, and once he stopped caddying for the father, he promptly forgot about the son.

Ten years later, Greg works at the Hermitage Country Club, which hosts an annual Mid-Atlantic Gold Tournament each Memorial Day weekend. When Greg notices Mr. Johns' name on the roster of registered guests, he thinks it'd be nice to see the old man again. But the young golfer who takes the JOHNS nametag is hot, sexy, and not at all who Greg expects.

Trey Johns was once "Junior," and is now all grown up. His first crush was on Greg, his father's caddy, and when they meet again, he's quick to inform Greg that he's still as smitten as he was before. But Greg has reservations -- he finds it difficult to resolve the memory of a gawky teenage Junior with the confident man Trey has become.

Greg's conflicting emotions almost blow the first chance he has with Trey. Will he get another?

Playing the Field: Tee'd Off (MM)

Joyfully Reviewed:
"I almost always enjoy stories of men hooking up with guys who had crushes on them years ago, and Tee’d Off was no exception."

Rainbow Reviews: 4 out of 5.
"Snyder’s creative imagination and great characters always deliver a fun story with a great setting. The clear detail had me easily imagining the golf course and it’s lush green fairways with the sun on my face. Perfect for an afternoon read, this enjoyable story easily delivers."

Review by Elisa Rolle:
"For a 40 pages long short story, Tee'd Off has two round characters and a nice set, and it's really an enjoyable story, above all, as I said, for the setting in an exclusive golf club, and for the taste of a life that not all people can have."

San Diego Erotica Books Examiner: 4 out of 5.
"The love scenes are hot and leave nothing to the imagination ... Don’t let these pass you by!"

More From Playing the Field

Playing the Field: Tee'd Off (MM)
J.M. Snyder
In Shelf
$2.99
All Books In Cart
All Books In Bookshelf
Excerpt

Greg feels a touch on his hand and a man behind them speaks. "Excuse me. I believe that's mine."

Greg turns. He's been leaning back against the table, his hand resting on it to steady himself, and now finds an attractive young man pointing at the nametag under his fingers. For a moment, Greg can only stare. The man is a few years younger than himself, with broad shoulders that fill out a loose-fitting polo shirt and a narrow waist accentuated by crisp khakis cinched with a leather braided belt. The flat plains of his chest and stomach hint at a band of thin muscle hidden beneath that shirt. His hands are large, his arms strong and tanned, the hair faint as if bleached by long days spent in the sun.

Eye contact, Greg reminds himself, forcing his gaze to rise from the front of those khakis, up over that firm chest. A thin gold chain winks in the open collar of the man's shirt. Above that, his face is smooth, giving him a boyish appearance, and something about him pings Greg's memory. That thin top lip that curves back when he smiles, the pert button of a nose, the warm eyes like twin pools of melted milk chocolate. Greg knows him somehow, or has met him before, maybe at an earlier tournament. Somewhere. Sweet Lord, how could he ever forget a face like this?

The guy smiles as he plucks his nametag from Greg's nerveless fingers. He lowers his head, holding the lanyard open wide to get it on over the baseball cap he wears. His hair is dark and long, brushing the back of his collar, and he flips it up to get the lanyard situated. Greg's gaze drops to the nametag and he gasps.

The guy picks up the nametag and turns it around to read it. "Yep. Thanks." He flashes Greg another of his winning smiles, then falters when he really gets a good look at Greg. One hand reaches out, forefinger extended, pointing. "Oh, my God. Greg? Gregory Chennault? Is that really you?"

Confused, Greg nods. Who is this guy? Should he know him? Hell, can he, please?

The hand opens, offered. When Greg doesn't move, he finds his own hand grabbed in both the stranger's own and pumped vigorously. "I'm Trevor's son."

"Junior?" Greg can't believe it. Trevor Johns Junior had been a gawky, awkward kid of fourteen when Greg saw him last. He'd never thought that shy, clumsy boy with the skinny legs would grow up so damn sexy.

"It's Trey now." The hands holding Greg's have grown warm but don't relax in the slightest. Instead, Trey covers Greg's thumb with one palm, encasing his hand completely. Greg is very aware of the heat generated between them, and the faint touch of Trey's fingers where they rest along his wrist. "God, it's good to see you. How the hell have you been?"

With a self-conscious shrug, Greg murmurs, "Oh, fine." Then, before he can stop himself, he gushes, "You look amazing." 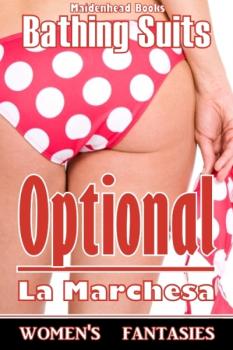