When Andy agrees to join his friends Reese and Palmer on a two-week cruise during their winter break from college, he's secretly hoping to score with some hot Latino lover.

Little does he expect his friends to crimp his style, or scare off the only sexy, single guy on the ship ... their waiter, Carlos.

Can he salvage the trip and entice the sexy crewman to pay a visit to his cabin for a little mano a mano time alone? 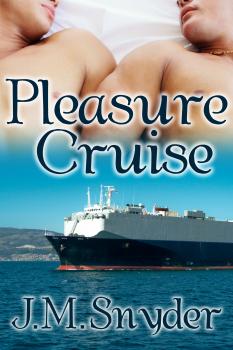 The waiter turned his black eyes Andy's way, and his smile widened. "That leaves the Captain for you," he said, setting the full glass of Captain Morgan rum in front of him.

Andy placed his hand over the waiter's and smirked when the guy raised one eyebrow at the touch. "What's your name?" Andy asked. He didn't care if Reese or Palmer heard him -- this close, the man was intoxicating, and he was here to have fun, wasn't he?

"Carlos," the waiter said, his smile slipping a notch when Andy rubbed his fingers gently. "Sir --"

Reese giggled at that, and Carlos glanced around the table, a look of confusion flittering across his features. "But you can call him anytime," Reese managed before laughing at his own stupid joke.

Great, Andy thought, watching the way Carlos looked at him distrustfully. Now he thinks we're picking on him. Beneath the table, he kicked Reese in the shin. His roommate balked. "Hey!"

"Shut up," he growled, glaring at his friend. He turned back to Carlos, hoping to apologize, hoping to smile over Reese's idiot remark and maybe talk to the guy a bit more, ask him what time he got off from work, if he could maybe buy him a drink ...

But Carlos was gone, already moving through the crowded room back to the bar, and Andy sighed when he didn't even look back at him. "See what you did?" he scowled. There went his evening. "Fuck."