Snow White’s a goth and Prince Charming’s a jerk. On Neve’s eighteenth birthday, her stepmother kicks her out. A group of diner rats offer her refuge—including Brendan, who offers his couch for her to crash on. But the more time she spends with him, the more he confuses her. One second, he’s kissing her. The next he’s pushing her away. Believing her life has reached rock bottom, Neve struggles to ditch her “damaged girl” label. But when she uncovers the truth about her life, she’s rocked to her very foundation. Will Neve be able to hold on to the good things coming her way, or will her bad luck poison everything? 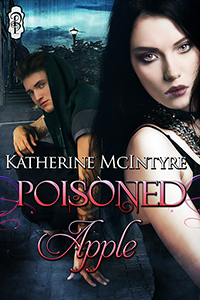 Neve knew this day would come. She’d been dreading it the past year, wondering what would happen and, for the life of her, unable to hazard a guess as to where the future would take her. After spending the past weeks worrying and hours in front of her computer screen talking to Internet strangers who had given her little useful advice, she’d grown wearier each day. At last, it had arrived—her eighteenth birthday.

Tugging at the spiked collar around her neck, she stole a glance at the front door of the house she’d grown up in. The peach siding created a gorgeous contrast to the stucco walls and the dark-brown roof tiles—a fairytale house in a fairytale suburban neighborhood. She rolled her eyes. Too bad life had been anything but.

She’d never wanted any of this, but such was life. Her dad hadn’t asked when he’d ditched. No, he’d pranced out of the closet and ran off with his lover, leaving her with Veronica.

Her neck itched from too much sun. She’d been out here two hours, pacing around her cul-de-sac one hundred thirteen times since she’d returned from her shift at the café and, so far, had accomplished nothing. Her stomach clenched with the stark hollowness of what would happen the moment she walked through that door. Inside, Veronica would be waiting. As much as she hated confrontation and knew in her gut trouble was brewing, she’d have to deal with her stepmother at some point and was better off handling this mess without a bad case of sunburn. Neve let out a weary sigh then trekked up the paved walkway to her front door. Time to face the beast.