As a child, Princess imagined a fairy tale ending. As an adult, she envisions a satisfying conclusion to a storybook romance years in the making. Abandoned as a little girl, Princess Sterling met Brant Levy and Colt Manning in the mountains of Kentucky. Thanks to Colt and Brant, Princess is adopted. She becomes the pampered child of racing royalty and enjoys a life of luxury. As Princess matures, she realizes something is missing. With a successful racing career of her own, Princess longs for love and dreams of one day reuniting with the cowboys who saved her from homelessness. Years later, Brant and Colt drive to Bristol with every intention of locating Princess while she’s in town for a race. As soon as they see her, they know they’re in trouble. They aren’t just hooking up with an old friend. They’re about to seduce the woman they plan to love. 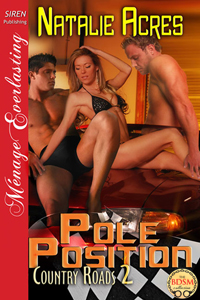 Heat Rating: Sextreme
Word Count: 29,176
11 Ratings (3.0)
Contemporary Menage a Trois/Quatre Western/Cowboys
In Bookshelf
In Cart
In Wish List
Available formats
PDF
HTML
Mobi
ePub
Cover Art by Les Byerley
Reviews
This book was so good. Princess as a young child and then as a grown up. I would like a sequel to this book. I would like to hear more of princess and her two men. Yeap I wanna hear more of Princess, Colt and Brants future.
Barefoot Okie
Not Natalie's best work. Beginning of book was good but fell apart once she wrote of present day.
racer girl
Read more...

Brant moved toward her, stalking her open mouth like a man on one hell of a mission. He held his cock and pressed the tip to her mouth, dragging his penis back and forth. She stared into his knowing eyes and rubbed her lips over the swell of his head, flipping the crest with her tongue while she tantalized and teased.

“Were you a good girl while you were gone?” Colt asked, running his hand over her hips and ass.

“No, Sir,” she said, pressing her chest against the cold metal furniture while mumbling against the tip of Brant’s slick shaft. The cool, slick top was soothing, and she was quite relaxed there.

Colt stepped behind her and positioned his cock at her back hole, pressing his lips to her nape as he dragged his tongue back and forth over the thin hairs scattered at her neck. Brant thrust inside her mouth with the tip of his cock tapping against her throat. And Colt slapped her bottom.

“I’m glad you were a bad girl,” he whispered at her ear. “I don’t know what to do with good little girls anymore.”

“Me either,” Brant said, tossing his head back over his shoulders and grinding inside her mouth.

She sucked and bucked, slurped and moaned, and within seconds, her bottom was well prepared, her puckered hole flexing as she fought to encourage impalement. Instead of fucking her ass, Colt continued to tease, watching as she taunted Brant.

She whipped her tongue around Brant’s size and then rose to the tip, whispering sweet nothings against his length. “What do you want, Brant?”

A dry chuckle left his lips and he yanked her forward, pulling her away from Colt in the process. He carried her to the sofa where he stretched out across the cushions, careful to ensure her body flattened against his.

Once there, he penetrated her right away, stuffing his penis inside her so rapidly she gasped with the sudden invasion. “There, baby,” he crooned. “Now we’re both happy.”

“Oh yes,” she whispered, clenching around his dick as his cock stroked her pussy.

As he fucked her, Brant slid in and out of her cunt with a slow speed, working his thick dick inside her walls deliberately as he nipped at the fullness of her breast, tweaking a nipple with his hot tongue.

Seconds later, Colt joined them. Sucking his middle finger, he grabbed hold of her hip and separated her ass cheeks, rolling the digit right outside her anus.

“Oh God,” she breathed, thrusting her hips back as she searched for something far more satisfying.

Brant fucked her pussy with hard thrusts, pounding inside her while Colt continued to play, working the pad of his finger right inside her back entrance.

“Hurry, Colt,” she encouraged him.

“Hurry, you say?” he asked, leaning over her back and pressing his lips to her ear.

“I know how to please you,” he promised. Then, he slid inside her back hole and penetrated her with long, deep strokes.

She stilled at first, trying to allow her body time to accommodate them. Then, she rocked between them, wiggling her ass against Colt’s cock as he hammered forward.

Brant eased in and out of her pussy, and the slower his pace, the more Princess tried to inspire him. She looked down, trying to view the point of penetration, flattening her palms against Brant’s hips as she rolled with the punches, going front to back and accepting what each man gave. 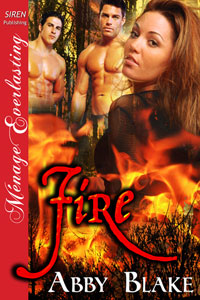