Ryan Talonovich is the star of his college hockey team, until an accident during practice leaves him confined to a wheelchair. The doctors say he'll walk again but a new season is already underway and he's been replaced on the team, which leaves him feeling alone and betrayed. What's the use of fighting to get back on the ice now?

Then he meets Dante Espinosa, a short track skater on the city's speed skating club. Though he has to work overtime to afford his sport, Dante is hell on ice, and dreams of making the cut on the U.S. Olympic Speedskating Team.

Their love of the ice brings them together, but too many obstacles stand in their way: Ryan's struggle with therapy. The memory of Dante's first boyfriend. Lack of funding to the event, Dante's harassing boss, a skating friend in love with him, and Wil Dietrich, who will do anything to win.

Book Cove Reviews:
"J.M. Snyder delivers a tear spilling, heart wrenching tale of love and inspiration; you will be totally amazed by the hero’s in this story, they let nothing stand in their way of their goals."

Chewing the Bone Reviews:
"[This] well-defined plot and engaging characters pulled me quickly into the world of amateur speed skating, and then held me captive with some rousing romance. Snyder writes a gratifying story I will enjoy reading time and time again."

Fallen Angel Reviews: 5 out of 5.
"A story about life, love and the hardships that everyone has to overcome ... combines love, laughter, along with serious issues to make a phenomenal story. This is one book that you will not want to miss."

Joyfully Reviewed:
"I felt intimately a part of Dante and Ryan’s relationship as it unfolded across the pages. Power Play is uplifting and beautiful, although, I wanted more at the end. I wasn’t done reading about Dante and Ryan! Power Play is another example of why J.M. Snyder is one of the best authors of gay romance."

Rainbow Reviews: 5 out of 5.
"A phenomenal story about two very different men who can look beyond outer appearances to the beauty that lies inside each of them."

Review by Elisa Rolle:
"The story is very well written and compelling. Dante's trouble to find the money for simple things but also for the month's rent, his daydreams of glory. Ryan's struggle with the therapy, his bad attitude, very right considering his situation, his relationship with his mother. Oh yes, his mother... cause we are speaking of a nineteen years old guy, not a man, and mothers are still a very present costant in a guy's life. And Ryan's mother is a wonderful character, not the perfect mother of fantasy, but a real mother, bothering but loving."

Ryan's mother raps on the door quickly, then calls out before she gets an answer. "Ryan? Your friend's here."

From the other side of the door, Dante hears the unmistakable sound of rubber wheels over a hardwood floor, and then the door eases open. Ryan grins up at him, opens the door wider. "Hey you," he says. As Dante steps around Mrs. Talonovich into the room, Ryan gives his mother a quick look. "Thanks, Mom." She starts to say something but he closes the door on her. Rolling his eyes, he tells Dante, "She'll sit in here all day if I let her."

Dante laughs and looks around. The room is obviously a den, complete with a fireplace along one wall, though the grate's closed and the hearth screened off. A hospital bed by the door fills most of the room and when Ryan nods at it, Dante sits on the edge of the mattress, dropping his bag at his feet. Long vertical blinds cover a sliding door to fall behind a desk complete with a computer and a vase of dying flowers. "From the team," Ryan explains when he sees Dante's raised eyebrows. "My mom won't let me throw them away."

"They bought you flowers?" Dante asks. With a dramatic sigh Ryan nods, and Dante has to laugh again. The awkward discomfort he felt out in the hallway is gone -- Ryan wears tattered jeans and an old sweatshirt, sneakers as worn as Dante's own, and it's warm in this room, well lit, the blinds pulled back to look out on a brick patio and covered swimming pool. Ryan's chair is close enough that Dante could reach out and take his friend's hand, if he wanted to. "So does that mean I have to buy you flowers for doing my site, too?"

He likes the blush that climbs up Ryan's neck and colors his face to the roots of his hair. "Oh God, no," Ryan says, ducking his head into one hand to hide his burning cheeks. "Dante --"

"I'm just teasing," Dante tells him. He swats at Ryan's knee playfully, which makes his friend giggle. "What kind do you like? Roses?" Ryan doesn't answer, too mortified to reply. Rubbing his friend's knee, Dante says softly, "I'm kidding, Ryan. You don't have to answer. Are you always so easily embarrassed?"

Ryan's voice is thick when he responds, "I didn't think so." Dante wonders if it's him doing this to the boy, making him bumbling and cute. He likes the blush and the way Ryan can't quite meet his eyes, the way his fingers pick at the threads along the hem of his sweatshirt. He likes the faint smile that tugs at the corners of Ryan's mouth as his hand rests on his friend's leg. If it's me, he thinks, give me a sign so we can get past this touch and go stage, please.

Dante watches Ryan carefully. When he removes his hand from his friend's knee, he imagines he sees a slight frown, gone in an instant, and was that enough of an indication? Does that mean he likes the touch? Dante's never been great at relationships but when someone's interested in him, they're usually overt about it, like Josey at the skate club who follows him around with puppy-dog eyes, or Bobby with his not-so-subtle requests to hook up. Even Jared was easy -- "Do you like guys?" he asked, and when Dante shrugged, nodded, Jared nodded back. "Me too." And that was it.

Ryan turns his chair around with an easy grace that belies the bulky metal frame. "You'll have to sit on the bed," he says, wheeling over to the desk where the computer is already turned on. "My mom doesn't think I need any other chairs cluttering up the room."

"It's okay," Dante says. He rolls onto his stomach and stretches across the foot of the bed so he can see the computer screen. Ryan slides his chair into the space beneath the desk, close enough that Dante can trace the tread on the chair's tire with one finger. "Have you done a lot to the site yet?" Before Ryan can reply, he smiles and adds, "Did I tell you how much you rock for doing this for me?"

Ryan laughs. "I told you it's not a problem," he murmurs, but the blush is back, thin and pink and unbearably cute. Dante wonders if his cheeks are hot right now -- he imagines pressing his hands to Ryan's skin, feeling the flushed flesh beneath his fingers, cooling it with kisses. As Dante watches, Ryan opens a web browser and the sound of a modem dialing up fills the quiet room. "I worked on it a bit last night but that's it," he says as they wait for the computer to connect. "I got a few pictures up that I really like but I don't have any of your stats or anything." When a page starts to load in the browser, Ryan adds, "I got the idea for the layout from another sports site. I was up all night looking at athlete pages."

Dante's impressed. What he knows of the Internet he can count on one hand, stuff he learned in high school because his senior year he was required to take a computer literacy class to graduate. He thought it was cool, but it meant nothing to him really -- it wouldn't help pay his skate fees or the rent, it wouldn't put food on the table, it wasn't something necessary. He doesn't even have a computer at home -- what good was it to him outside of school?

But a thrill races through him as his own image stares back from Ryan's computer screen, a great shot really, him leaning against the railing at the rink, the ice lit behind him, his hair falling gently to frame his face. He has a faint smile and even from here he can see the smoldering look in his eyes, the come hither look that was meant for Ryan -- is the boy blind? Can he not see that, the way Dante looks at him? Every picture should be like that, every shot he was staring through the camera, willing Ryan to see something more in the lens than just a friend. What else does he have to do to clue Ryan into the fact that he likes him?

"Wow." Dante crawls across the bed to sit up on the edge by the computer so he can get a closer look. Almost unconsciously, he leans on the arm of Ryan's chair, leans close to the screen, until he can see his own goofy grin reflected back at him over the picture. "You did this last night?" When Ryan nods, Dante laughs. "It's awesome."

His name across the top, Dante Espinosa. Beneath that, The Hottest Thing on the Ice!, a tagline worthy of any major newspaper. Then his image, filling the main part of the page. A little write-up about him -- When he's on the ice, the crowd goes wild. With that mane of dark hair, those heartthrob eyes, he's more rock star than speedskater, but he can fill the stands and never disappoints. Dante Espinosa skates like the wind, whipping across the ice and leaving his opponents behind ... "You wrote that?" Dante asks. Ryan used the word heartthrob to describe him, Dante likes that.

"It's just something to fill up space," Ryan says softly. Dante turns to smile at him and suddenly he's all too aware of how close they really are right this moment, mere inches apart -- he can feel Ryan's breath on his neck, and his hair casts a shadow across his friend's face where it falls to block the light from the computer screen. I could kiss you now, Dante thinks, studying Ryan's mouth. What would you do if I did that? Push me away, kiss me back? Ryan's tongue licks out between his lips, wetting them, and Dante tells himself he's going to do it, he has to. He's never been this shy before. Ryan's eyes slip closed -- see? Dante thinks, leaning closer. His hand covers Ryan's on the arm of the wheelchair. He wants you to.

A knock on the door stops him, and then Mrs. Talonovich's bubbly voice calls out, "Ryan, dear? I have milk and donuts for you boys. Open up." 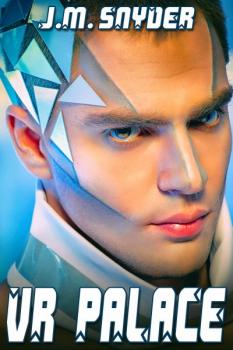 My Boss Is a Grumpy Werewolf and I Think He Wants to Marry Me! (MM)
Jane Wallace-Knight
In Shelf
$4.50
Tweets by
sirenbookstrand