Trapped on Mykonos, Azalee makes a deal with a god of death: find him Desdemona, and he’ll bring Joel, the love of her life, back to her. But her attempts are thwarted at every turn by an infuriating High Priestess, who touts great political pull and seems to have sinister plans for Azalee’s future.

Shipped back to Illyria, Joel is imprisoned beneath the Kurios’s quarters, where he’s unwittingly reunited with his dangerous elder brother, Deimos. Joel wants to rescue Azalee, but Deimos is determined to prove that Joel must break his pacifism to do it.

Though on opposite ends of Greece, Azalee and Joel’s decisions continue to twine across the threads of fate. Will fate bring them together, or are they destined to remain apart? 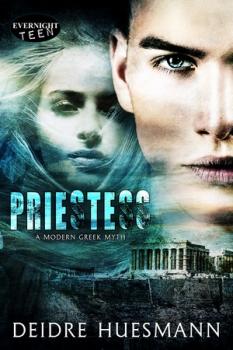 More From A Modern Greek Myth 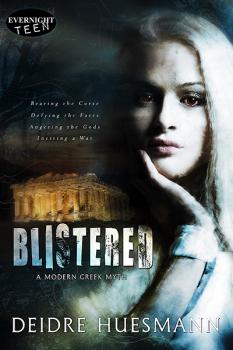 The girl pointed down at her feet. When Azalee looked, she saw nothing.

Then she lifted her right foot. On her heel was a stark black tattoo that had not been there that morning. The image confused her: a stick with one end curved inward, and what looked to be a flame burning up into the curve.

She looked back to the fleecy-haired girl. “I don’t understand.”

The girl swallowed and said, “You have been marked by a shunned god.” Before Azalee could fumble up an answer, the girl gasped. “I must go!”

But the girl bolted, and she was fast. Azalee gave chase, but once she turned a corner, the girl and her fluffy cloud of hair had vanished.

Groaning, Azalee leaned against the cool, jagged wall of lodestone behind her. Priestesses filed past, none of them looking her in the eye.

As though they knew.

Curse you to the Fields of Punishment, Thanatos. Were the ethereal deity nearby, she would have exploded with each and every profanity under the skies.

Azalee pushed away from the wall and fled for the common bedroom. She needed out. Immediately.

Yet she knew if she were to flee, she needed something to protect herself from the sun. A blanket, a sheet, more chitons—anything to cover her body.

Before she reached the threshold, she caught sight of the High Priestess. The woman strode calmly toward her, head held high. Her mouth remained a straight, prideful line.

Cursing inwardly, Azalee forced her steps to soften and slow. Maybe she was lucky, and the girl hadn’t reported her new marking.

Azalee kicked her right foot a little higher under her chiton than necessary, hoping to hide her strange new tattoo. She sat on the bed, the soles of her feet firmly on the ground, and pulled back the covers. A few other priestesses milled about as they tidied the room.

The High Priestess approached her. “Azalee.”

The High Priestess’s eyes remained cool and opaque. “Theseus says your conversation was not as productive as he’d hoped.”

Her fingers curled around her pillow. Azalee said tightly, “I’m sorry to hear that.”

“You do, of course, realize how beneficial a husband of his standing on the island might be?”

Warmth erupted in Azalee’s ears. How is that your business? She struggled to keep a polite tone. “I would rather remain pious to Selene.”

The High Priestess shook her head. She turned and started to walk away, but paused when two women barely older than Azalee approached.

“Take our Blistered child to the Box.”

Azalee leaped to her feet, but someone grabbed her from behind before she could defend herself. Within seconds, three priestesses had hold of her while a fourth bound her ankles and wrists with loosely woven cloth.

“What are you doing?” she cried.

The High Priestess loudly announced, “Unfortunately, our blessed Blistered child has tainted the scrying pool. As punishment, she shall spend a day in Apollo’s Box.”

Azalee’s stomach plummeted. She had no idea what that was, but the High Priestess’s tone promised it would not be a pleasant experience. When she opened her mouth to protest, someone from behind pulled a thick strip of cloth through her teeth. The knot tightened behind her head tore out strands of her hair.

The High Priestess leaned in close, resting a hand on Azalee’s shoulder so she could whisper into her ear. “We shall see how you feel about Our Son of Mykonos once you spend a summer’s day sweating yourself into a delirium.”