Jessica Jackson is a time-witch whose familiar and lover is a shifter named Titus. She comes from a long line of witches, stretching back to ancient Lemuria and can step through the doors of time, using her grimoire, her ancient book of magic, garnered from magicians and witches from many civilizations and times.

Jessica and Titus found themselves trapped in the Grimoire after they escaped from the witchfinder, Gideon Fallowfield. A release spell goes wrong, and Jessica finds herself flung into a magic ceremony in 1776, conducted by the infamous and ruthless Count Luigi de Cortellazo. 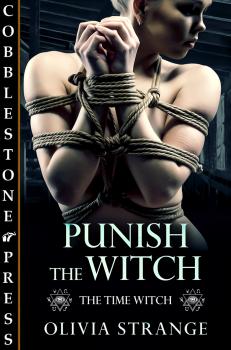 The chamber was dim, lit only by five guttering, strategically placed black candles. By the flickering light, and using an ebony rod, Jessica inscribed a circle in the mixture of salt and sand she’d methodically spread over the marble floor.

She stood for a moment to inspect her work and make sure the marble was visible through the sand and salt and then, inside the circle, she drew a perfect pentagram with each of the five points touching the circumference.

Satisfied with her work, she set the rod against a wall. “The pentagram is perfect for my purpose and for my escape,” she said with a smile, looking up at the hefty black cat that sprawled across the top of an upright Egyptian sarcophagus. The cat’s green eyes followed her every move as it swished its long tail languidly across the painted face of the long-gone Egyptian priest of the god Sobek.

“And it will be a release for you too, Titus, my sexy charmer,” she added, her lips curving in a lascivious smile as she ran a hand over her bosom and winked.

She laughed at the widening of the cat’s eyes and the quickening beat of its tail movements.

“Patience, though, Titus. I am not yet finished.”

That’s right, my lover, she thought. I know that you are excited. My cunnie is drooling at the thought, too. We have been imprisoned overlong in the grimoire. It is time that I came up with a powerful enough charm to free us.

She loved this particular chamber in her grimoire, with its table covered in bubbling retorts, vats and flasks, the dragon-legged tables crammed with magical paraphernalia, the bookcases full of scrolls, papyri and leather covered tomes, and the shelves with their pots and jars full of specimens from the animal, plant and mineral kingdoms. She gave thanks to each and every article and made mystical signs over them.

Finally, turning to her reflection in the burnished bronze mirror on the wall, she untied the sash and slipped out of the long black robe that covered every inch of her except hands and face.

Titus purred noisily at the sight of her naked body.

“Patience, I said, you filthy-minded shifter,” she said with a smile, looking up at his reflection in the mirror. The cat stood up and arched its back, licking its lips. “You just wait and watch until I say it is time.”

When she was free to walk the earth, men desired her. Not just men, but also beings such as Titus.

Swaying from side to side, she admired her curves, particularly her large round breasts with their big, rust-colored areolas. About her neck hung a chain, on the end of which was a medallion that nestled between her breasts. Set in its center was a bright green gemstone, a green garnet from Lemuria, a continent that vanished five thousand years in the past.

Jessica was a witch from an ancient family of witches and warlocks. She could do far more than just prepare potions and remedies as most so-called witches claimed, for she could weave spells and control the ancient magic that permitted her to pass through the doors of time itself, to move between the centuries as mortals might move betwixt rooms.

And after every such magical leap, Titus had been able to follow her using his own considerable powers, motivated by his never-ending desire to dip his cock in her pussy. It was a mutual need that benefitted them both and which produced great magic.

She licked her right middle finger and smiled at Titus’ reflection as she slid her finger down her belly toward her thick thatch until she slipped it between her moist pussy lips.

Hecate! I am so wet I can barely contain myself. But soon, we will work our charm. I need him to be so aroused.

She reached up her other hand and touched the healing, yet still tender, scar on her right upper arm, a legacy of the musket ball that had so nearly killed her. That had been in Pendlebury a month before, by her reckoning, when the witchfinder Gideon Fallowfield had tried to slay both her and Titus. They had escaped into the grimoire just in time, but only to discover that the wretched man had followed them, intent upon finishing his work.

The fool, she thought with contempt. He and Matthew Hopkins, the self-styled Witchfinder-General and their ilk had sent hundreds of men and women, almost all of them innocent of actual witchcraft, to their deaths. He dared to enter my Grimoire, and he paid the price.

The witchfinder had been instantly turned to stone by the grimoire’s intruder spell, which had been a mercy for him if anything, for Titus would have shredded him to pieces. As it was, they had placed his stone body in the sarcophagus, which was why Titus in his feline form liked to sit on top of it, as if it was his favorite trophy.

Jessica’s grimoire was a textbook of magic and the occult that had been in her possession ever since she was a girl, when she’d inherited it from her mother. It had been in her family’s possession for centuries, although mere years could not age it. It contained writing and spells gathered from different cultures and civilizations ranging from ancient Mesopotamia, to Egypt, India, Greece, Rome and even distant Cathay. The writing, however, would not have been familiar to anyone from those places, since it was inscribed in the language of ancient Lemuria, which was known only to those of the true bloodline of the priesthood of Hecate, the Mother Goddess of Lemuria, who had also been known by many names in other, later lands.

The grimoire was more than a book; it was the vessel that carried her through time. The only downside was that there was a price to be paid. After diving into the book as if it had been a swimming pond, she and Titus were forced to remain inside for a hundred days, locked in time. Only by using a powerful enough charm could they unlock the book and be free again. From experience, she knew that it had to be a completely new spell each time.

But where and when they would find that freedom was unknown to her. Because they had escaped into the grimoire before she had a chance to cast an appropriate spell, the book could have materialized anywhere throughout time.

She turned and looked up at the cat as she slid her fingers in and out of her pussy, her little sighs of pleasure clearly sending the cat into a frenzy of desire.

Fixing his green eyes, she shook a finger forbiddingly at him as she crossed to the pentagram and carefully lay down upon the sand and salt mixture. She positioned herself so that her head, hands and feet lay exactly on top of one of the points of the magical figure.

To herself she whispered a spell in the ancient language of Lemuria, focusing on each point of the pentacle, which corresponded to the magic elements of Earth, Air, Fire Water and Spirit. As she did so, the power flowed through her limbs and her pussy oozed with desire, exposed as it was now with her legs splayed out inside the mystical circle.

“It is time now, Titus,” she whispered urgently. “Come, my familiar, my filthy shape-shifting lover, and fuck me!’