As the racing season progresses, Lily’s ex-boss keeps interfering to sabotage Kai. People around them aren’t always what they seem to be and that includes a traitorous team member, but also a nice driver that wants to help.

In spite of that, at the end of the championship, Kai still loses the big trophy and has to give up Lily as the contract with Joe Franco required.

But he just can’t let her go, so he comes up with different plans to rescue her. 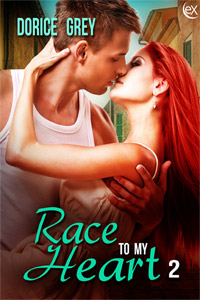 More From Race to My Heart 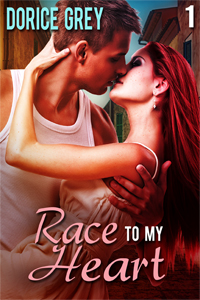 As I walked back to Kai’s room, I thought we should be grateful that he had the right state of mind to stop the car and didn’t crash. Fanning myself, I felt a bit dizzy and realized I hadn’t eaten anything that day. I’d been too distracted. Combined with the adrenaline leaving my body and the stingy smell of the hospital, I was surprised I was still standing. To make sure I wouldn’t fall, though, I stopped for a few seconds in the waiting room and took a few deep breaths.

“Are you okay?” a nice lady asked.

“A little tired,” I replied, smiling.

“Tell me about it! I feel like I’ve been here a lifetime.” She sighed and fanned herself with a magazine. Then she put it on her lap and leaned back in her chair, closing her eyes. She definitely looked more tired than me.

Involuntarily, I looked at the colorful magazine. It opened at a random page, or so I assumed since the woman hadn’t recognized me, despite that huge photo that covered almost the whole page. What the hell?

Don’t panic! Don’t panic! My mind tried to calm me, even though my jaw was already on the floor.

“Sorry? Did you say something? I’m afraid I spaced out,” the lady said.

Hoping I looked normal enough with the fake smile I pasted on my lips, I pointed to the magazine and asked, “Um, can I borrow that?”

“Sure! There are plenty of others around.”

“Thanks!” I grabbed it and went on my way.

The article was called Read it and weep, ladies! What a shitty name! My picture was photoshopped between one of Robby’s and one of Kai’s, both of them a little smaller. Apparently, I was the main character here. The boys were wearing the usual blue shirts and caps, their team’s primary color. Adonis even had his sunglasses on. Both were breathtakingly handsome, whereas I was wearing a pair of worn-out jeans and a stained red tank top. Well, hell! I didn’t know I had to dress up to take the garbage out! Who on Earth would have thought I would get photographed while cleaning the house? And where could that damn paparazzo have been hiding? There were no bushes around the parking lots where we usually parked the trailer.

After I overcame my first shock I braced myself for reading the actual article.

A few weeks ago we saw this charming lady in the company of Roberto Diaz, the hot part of the duo that currently drives for Bolt Racing, and wailed in our misery for losing another hot rich bachelor. Then the hot bachelor made an announcement that shocked us out of our minds (yes, ladies, unfortunately, this one is lost forever because he is gay!) and we wailed again.

Now, we see the same female―

―exiting Kai Morganstein’s motorhome, dressed casually enough to assume that she has been in there for a while. (She’s taking out the garbage for crissakes!) So, after a few moments of frowning in confusion, we wept once more.

Yes, ladies, we lost another one!

We dug around and found out that said lady had been present at the last two races in the team’s garage and she is the Iceman’s official date.

If Robby hadn’t admitted his orientation, this would have been a little awkward. It still looks suspicious. How lucky can this woman be to get to know both F1 drivers in one month? Two of the most gorgeous ones, yet! Too lucky, right? We think so, too. In spite of the rumors of having a very colorful past, nobody knows much about her.

Well, don’t you worry, ladies, we’ll look into this matter! We’re not gonna let just anyone steal our hotties!

A shitty name for an even shittier article! Who the fuck wrote this crap? Sylvia Smith. Smith! Right!

I checked the cover of the magazine, my nose wrinkled in disgust. It was called Famous Men’s Privates, and it looked more like one of those free materials spread around by the same persons that wrote them. Which was worse than an actual magazine! I turned it over to inspect the back and―yes, it was free. Shit! That meant more people read it, and that could lead to the world knowing my story. Great! Fucking marvelous! Damn those nosy people! Why couldn’t they just mind their own business?

And why was it so fucking important for Kai or Robby, or any other driver for that matter, to have a well-known girlfriend? Singers, actresses, models, or tennis players! Why not just a normal girl? An accountant or secretary or even an interior designer!

Wait! Interior designers can be famous. Scratch that!

The actual reason behind my rage wasn’t that I was not famous, but I didn’t want to accept the real reason. I was no VIP. Unfortunately, I wasn’t a normal girl, either. My past could overshadow Kai’s career, and that wouldn’t be fair to him. The way we met and ended up together had to stay a secret, for his sake, and I would take care of that if I had to strangle every damn paparazzo that I came across.

That’s my girl! My evil self grinned and clapped her hands.

The fact that Robby came out also didn’t help because people still noticed that I’d been seen with both men in one month. I could argue that Robby was just a friend, but I doubted anyone would believe it.