Gaining control, Rachel rotated a half turn to the right, opened and focused through her tears on the only source of artificial light in the room. She blinked as the number on the red LCD dial of the bedside clock changed and reflected ‘2:00 A.M.’ in the dark dilated pupils of her tired and sad eyes.

She took a cautious step, stopped a full minute in order to watch and listen. Satisfied she had not been detected when she had slipped from the bed and gagged, she tiptoed around the foot of the bed, keeping a wary eye on the rhythmical movement of the sheets produced by the snoring man—the man with whom she had only a short time before given the pleasure of her body. She watched the up and down movement of the sheets for several minutes and tried to visualize the shape of the naked man beneath—the man with whom she had spent the last ten years of her adult life—the man she had married with lust and the promises produced by youthful dreams—the man she now hated.

It would be difficult, she knew, yet she must escape. She had endured all she could of the sickening fetish, the girls and the sex. She knew he would pursue her relentlessly, for it was his nature to seek revenge. She made a vow as she stood watching him breathe—a vow so harsh she at one time would never have believed she could make—a vow to never love again. Thus begins Rachel’s story. 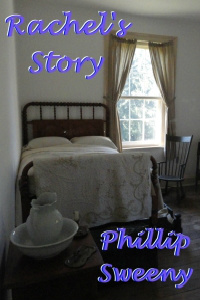 “But, what if one of them testifies you called them and asked?” Landry went on with her ‘what ifs’. “What if this girl, Tanya, says that you called her and made the advance? What if she says you picked her up in a bar? What if she swears that you and she were lovers before any of this happened? He might say that you conned him into it. I’ve seen it happen. Things can turn around in the opposite direction in a courtroom. It can happen in the blink of an eye.”

“If you were Tanya, would you come to court and admit to anything you’ve just seen on the DVD?” Rachel asked.

“No, I personally would not, but money buys a lot of things.” Landry shrugged her shoulders. “Do you really know what this girl, Tanya, would or would not do? By the way, you said she stayed with you for six months. Why? She must have enjoyed it. Why did she leave?”

“Does money buy you?” Rachel shot back. “Would you do it? And, I don’t know why Tanya left. She left like all the others. She was there one day and gone the next. I asked and I was told it was none of my business.”

“What does your husband do for a living?” Landry changed the subject.

“He works for the CIA,” Rachel answered.

“Oh.” Landry picked up her pencil and resumed writing. “The CIA, you say? That might make things a bit touchy.”

“Yes, “Rachel said. “He works for the CIA. Regarding a divorce, what has that got to do with the price of oysters in the springtime?”

“How high up in the organization is he?” Landry asked. “If he punches a time clock it’s not so much of a problem, but if—.”

“He’s high enough.” Rachel looked back out the window. “He’s high enough to be scary. He has resources. He’s not in a position where scandal could be used against him, though. I’m sure of that issue. He hasn’t told me everything, but I’ve pieced some things together.”

“Like what?” Landry put her pencil down and stood to stretch.

“He has something to do with espionage.” Rachel continued to look out of the window.

“He’s a spy—or has been—yes.” Rachel turned to face her. “I’m not sure what he does, now. He’s gone from home for long periods of time. It won’t do you any good if you’re thinking about putting a detective tail on him to try to get dirt on him. I assure you. I’ve tried it, and—.”

“Detective turned up missing and his agency closed,” Rachel answered.

“I—uh—,” Landry hesitated and tapped the eraser end of her pencil on the legal pad.

“Give me a break.” Rachel shook her head. “I know the drill. I hired a second one. Six weeks later he disappeared, too.”

“Disappeared?” Landry took a sip from a coffee cup in front of her.

“Look back through the Pittsburgh Gazette of March 12,” Rachel instructed. “You can pull it up on the internet. He disappeared without a trace. The case was never solved. I was told by the man you see on the DVD that it could easily happen to me. He made it clear that he made it happen, to both of them. He said he had resources. I suspect Tanya and the other girls met the same fate.”

“So, he threatened you? Can you prove it?” Landry asked. “Do you have any paper trail on him? We have to have something.”

“There is no paper trail,” Rachel stood and paced back and forth in front of the window. “I can assure you of that. I told you he is very thorough in everything he does.”

“I don’t know if I can help you, then.” Landry made another note on her legal pad. “You show me some awful things on a video, yet you look like you partook of the fetish with gusto. You said he forced you to have sex with girls, yet no one is available to corroborate your story. You said he forced you to do some very, very, disgusting things. I admit they’re gross, yet you have no proof of him forcing you to do them. On the evidence you’ve given me, it looks like you enjoyed it as much as he and Tanya enjoyed it. I need more proof.”

Rachel stepped up to Landry’s desk and stood with her arms folded across her chest. She looked back and forth and at the door. She walked back to the window and looked up and down the street. She stood for five minutes before Landry broke the silence.

“I’m sorry, but no proof, no case.” Landry put her pencil down, turned the legal pad over and placed the two DVD’s on top after putting each one into their paper jackets.

“Okay, I’ll show you proof.” Rachel stepped back to the desk and removed her wide-rimmed sunglasses. “Is this enough?” She put both hands on the desk and leaned across so her face was only inches from the astonished face of Julie Landry.