Ada Raven, born in poverty and religious fundamentalism, wanted "it all" out of life and strove successfully to get itbut at a high cost. J. H. Kincaid, a larger-than-life novelist of men's adventure stories, is determined to possess Ada, and she ultimately finds herself torn between Kincaid and another man, William Hagen, who patiently waits in the wings to provide her refuge.

Kincaid's sweeping, possessive appetite isn't satisfied with just Ada, thoughhe wants her sons, as wellall the way to the third generation. Ada's ravenous beauty guarantees her longing to experience and escape the world at once, to be loved by strong, powerful men, is thoroughly satisfied but at what cost?

Raven Possession is the saga of six decades of a remarkable woman's life and of a strong man's vendetta of possession and control over her and her family. The journey takes the reader through the highlights of six decades of American history, from the homesteading of the West to the false interlude of peace in the 1960s. It follows Ada from the small town Midwest, the St. Louis World's Fair, and the Spanish flu epidemic to a celebrity dude ranch in Colorado and ultimately to the halls of government in Washington, D.C., and even exotic Southeast Asia.

But everywhere Ada turns, there is the brooding presence of J. H. Kincaid, manipulating her and her family, determined to possess everything Raven until it all comes to a fiery, explosive end. 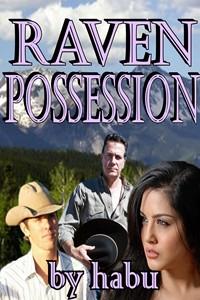 From WitchGiggles from Alternative-Read Reviews
This was for me a most unusual read as it covered a much larger lifespan in greater detail than mostI found it intriguing, resourceful, full of incredible sexThis made me think, made me feel and at a couple places even kinda made me angry at the characters. To me that's the sign of a good readwhen you get that involved.

When they first started working their horses up into the foothills of Hahn's Peak, Ada was quiet. She more than a little resented this somewhat petulant demand on her time and resources that the self-possessed novelist had made. She had little idea how to track elk and Kincaid had taken her away from all of her other guests. But J. Harvey Kincaid was a patient man, a very patient man. And he proved to be a fascinating travel companion, as profound, humorous, and lyrical in his observations of what was going on around them in the wild, beautiful Colorado mountain wilderness as he was in an opulent dining room amid gleaming silver and shining china and crystalware.

The two rode across the isolated ridges for the morning and afternoon, straight for the tree line, where Ada had seen elk in her painting excursions. By evening their horses were worn out and although they had seen elk, it had been at a great distance and only fleetingly; there had not been time or opportunity for Kincaid to get off a rifle shot. Ada secretly was pleased with this, as she hated any thought of the killing of any of those magnificent beasts.

As the sun was setting, Kincaid suggested that they just lay by in a stand of cottonwood trees next to a fast-running stream in a sheltering ravine. They ate that night over an open fire, leaning against the saddles they had slung on the ground between the bank of the stream and a line of cottonwoods. J. Harvey was his charming best, weaving a story of primeval earth just for Ada. He told her of the village of simple, close-to-the earth people of beauty and purity who were on the eve of being invaded by the despoilers of the outside world. He described in great detail of the last night of lovemaking across the village, with the men warriors of the village knowing that they had to meet in the new dawn in a cataclysmic and surely final battle in the meadow separating their primeval forest from the cruel modern world.

Kincaid focused on one woman of the village who knew the precise moment that her husband and her only surviving son died in this battle, and how, in her grief, she ran deeper into her forest, only a short time ahead of the invading "moderns" to die in the forest, to become absorbed by the earth. He told in poetic words how, exhausted, she leaned into an old oak tree, which slowly morphed into her lost husband, making deeply possessive love to her there, as she was absorbed into her virile oak of a husband, gone to this world when the despoiling "moderns" reached and then passed by the base of the oak. The intriguing metaphors of Kincaid's imagery possessed Ada's soul as his rich voice rolled over her, using the words of earthy love that did not sound dirty on his lips and that stirred her to the quick.

The air was crisp and slightly chilly, and Ada had been sitting close beside him as they leaned against his saddle and shared the single blanket to aid the glow of the campfire in warding off the cold wind. As Kincaid melded his story to slowly enfolding Ada to him under the blanket, he reasoned in whispers that they would be so much more comfortable making maximum use of their shared body heat. And Ada, lost in his storytelling believed him and melted into him.

The story was sad and poignant all at the same time and Ada was crying. Kincaid kissed her tears away. And he kissed her cheeks. And he kissed her lips. He told her not to cry, in that mesmerizing poetic baritone voice of his. He told her he loved her. She whimpered that she had disappointed him; that he had not bagged the elk he wanted. He asked if she hadn't understood his story at allthat she was the elk. The elk only symbolized her, and it was Ada herself he needed to possess. Ada was the spirit of his elk.

He asked Ada if she trusted him and if she loved him too. And then, at that moment, she surely did. He unbuttoned her shirt and comforted the hollow of her neck with his lips, and then he cupped her breasts and comforted her nipples and her belly with his hands and his tongue.

He unbuckled her jeans and slowly unbuttoned the fly, all the time telling her that he loved her and wanted to take care of her. And asking her if she loved him and trusted him. And she did and told him so. And then he told her he wanted to be her virile oak. That he wanted to fully bond with her, for them to melt together in one unit. Then he unbuttoned himself and turned her and placed his lips and tongue where Estelle had so recently played and was pushing his huge manhood between her lips.

At length he moved her again, on her belly over the saddle, and he knelt behind her between her spread legs and fucked her long and deeply, all the while making love for her with the poetic murmurings of his rich baritone voice. He possessed her fully and several times and in various positions in front of the crackling fire throughout the chilly spring night. Her young, masterful, virile oak 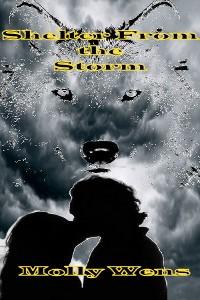 Shelter from the Storm
Molly Wens
In Shelf
$7.99