His name is Jayden Ravine. He was once the most decorated pilot in the history of Stellar Corps. Now he hunts mineral deposits and the like with a thousand other prospectors, hoping to strike it rich or at least more comfortable.

Not that that mattered much to him. For more than a decade, all he had done was exist from day to day, fighting down memories of the life he’d had and the mistake he made that ended it.

Then, in one day, everything changed. All because of a pair of chance meetings. The first one threatening to drive him further into his self-imposed hell, the second offering him a way out, and a second chance at the life he’d lost.

Until more of his past combines with his present to threaten not only his life, but the lives of everyone on the station.

In order to stop the massacre he sees coming, he has to draw on the persona he developed during the Border wars. In order to save his new life, he has to use his old one. He has to bring back Ravenstar. 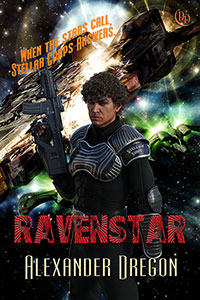 The bar was almost empty when I found my way in. Almost, but not quite. On the far side of the room, a young couple sat, whispering and giggling like school kids, occasionally sipping on drinks that I could smell from the door. Anything that strong pretty much guaranteed that the party would be over as soon as they left, but they didn’t look like they had any intention of stopping anytime soon.

After the day I’d had, I had to admit to the appeal of the idea. Looking around for any other patrons was a lost cause. The rest of the room was almost sterile in its emptiness. In short, just what I needed.

The bar looked to be generic enough that it could have been a clone of a hundred other places I’d been over the years on different stations. Dark corners for the lovers, temporary or not, and bright spots at the pool tables or dart boards. It almost felt reassuring to find something that looked so familiar. The others on-station looked more modern and antiseptic. Call me old-school, but a bar shouldn’t be able to double as an operating room. At least not without a little work.

I could have gone to a swankier place on some of the upper levels, but the idea of meeting the kind of women that frequented those kinds of places, as usual, simply didn’t appeal to me. Some might have called it slumming. I called it relaxing, if anything could be called such for me. And besides, at the moment, I was in the mood for something new.

I took a moment to examine my look in the mirror. I liked to blend in as much as possible. It wasn’t really hard. I pretty much looked like everyone else. At least in my opinion. Once upon a time, I had been considered a poster-boy of sorts. Never knew what the marketers saw in me, other than my war record, but they pushed hard to use it, despite my objections. Ego was never a part of my make-up. While they went on about my square jaw and aquiline nose, all I saw was a guy that had seen too much and spent too long holding it all in. My eyes looked tired, but then I knew the reasons. And how much it had taken me to get to that point. As for the rest of it? I guess I passed muster with the ladies if there was such a thing. As for the rest, that was their call.

The only thing I was proud of was my hair. Thick and full, it was the only part of me I put any real effort into. There was a time when I used to have it done just to relax, then reveled in the stares when I went out. It caused me a lot of ribbing from the rest of the squad when I was in back in the unit, but the truth was, it was worth it to me.

So, I stepped into the bar trying not to let anyone see that at this exact moment, my guts were tied up in knots.

In moments of inspection, inflection or whatever, I guessed I’d been blessed with more than passable looks. As far as the rest, I didn’t think about it too much.

I walked up to the bar and slid onto a stool, just as the bartender turned around. And for the second time that day, I was stunned.

The woman behind the bar was hard to gauge as far as age went, but in fairness, I was not an expert by any means. She could have been my age or anything up to about ten years different in either direction. Her hair was shoulder length blonde framing a slim face with cheekbones that hinted at someone in her family tree being oriental or perhaps Native American. In either case, beautiful was the only word that came to mind when I finally found her eyes. Morning-sky blue, but warm, like a spring day. She was smiling as she moved to the bar, and those eyes were part of the process, making the expression look not only genuine, but enthusiastic. If it was an act designed to set her clientele at ease, she was a master of her craft.

Suddenly, those sky-blue eyes focused on me intently, although her smile never wavered. It was clear though, that she was assessing me, trying to figure out if I was a harmless barfly, a hustler looking for a mark, or just a drunk looking for a new watering hole. It took less time than I spent picking out socks in the morning. No doubt about it, she was good.

Those eyes relaxed again, and the rest of her face went with it, sliding into what appeared a more natural expression. Now I got a chance to look at the rest of her.

She was not a large woman, just over five feet tall, and she carried a little extra weight, but it was spread over her entire body, giving her a fleshy appearance. She was hardly an athletic type, but she had the kind of body that was…intriguing. Soft. Lush. And very appealing.

Then she spoke to me, quietly enough to not disturb her other patrons, her voice matching the rest of her, soft and strong. I could see a lot of her clients coming in just to see her.

I thought about my answer and then smiled broadly as I pretended to survey the bar behind her. “If you got any new lives in any of those bottles, I’ll take one.”

The smile widened fractionally. “Sorry, love,” her voice was a throaty growl, “if I had anything near that back here, I’d have sucked it down long ago.”

Now I laughed openly, and she joined in, her tone both feminine and hardy. If there was some kind of test, it looked as if I’d passed. She studied the wall as if to find something that would suit me. Her eyes finally landed on a bluish green bottle on the bottom shelf. She picked it up, read it for a minute, gave me a strange look, and then shrugged.

I took the bottle and read the label. Gel vin Brandy. Smiling at her somewhat curiously was enough to show my confusion. She smiled back at me, saying, “Rich, full, smoky flavor that’s great for sipping.” Her smile turned just a little evil as she added, “But you need to be careful with this one. It packs a punch and some people say it’s a little addictive.”

Looking at the smile and the eyes, I wondered if I was being played, but again, after the day I’d had, who cared? I handed the bottle back.

“Any chance I could convince you to join me?”

She honestly seemed surprised, then shrugged as she watched the two lovebirds pack up and head out the door, apparently deciding they needed a little more privacy. With a sigh, she answered, “What the hell? It’s not like I’m gonna do a lot of business this time of the month. Not with all the inspections and whatnot going on. Hell, truth said, I was surprised to see you here.”

Now I stared at her even more curiously. In answer, she nodded toward the door. “Most of my clientele are pilots, technicians, and mechanics. The upper management generally heads out to the other side. Classier joints over there. And higher prices.”

I nodded, then asked, “Okay, but what is it that makes you think that I’m one of them?”

She pointed at me, or more precisely, at my eyes.