Jake is wealthy, handsome, well hung and hung up on the female orgasm—and doesn’t need a GPS to find it. He’s also commitment phobic, so he satisfies himself with a series of high-paid escorts. Until he meets Sugar.   Sugar, sexually abused from age 14, chose to become an escort to take control of her sexuality and her life. Her impeccable taste leads her to collect art; her huge heart and compromised childhood motivates her to help get homeless teens off the streets; her irrepressible sense of humor is one of her key survival mechanisms. But none of that prepares her for her newest client, Jake.   Their powerful sexual connection slowly transforms to romance, challenging both of their needs for control and independence.   Think Fifty Shades of Grey meets Pretty Woman.   Sugar is the first woman able to keep up with Jake’s sexual needs. Matching him for creativity and stamina, she becomes his regular. As their relationship becomes personal and intimate, Jake panics and hires someone else, only to discover that he isn’t even slightly interested in sex with anyone other than Sugar.   But when Sugar learns Jake had hired one of her colleagues, she quits the business and devotes herself to rescuing young troubled girls from the road to ruin and herself from the pain of missing Jake.   Unable find Sugar, Jake descends into suicidal depression. His closest friend Alberto tracks down Sugar and talks her into going to see Jake. Sugar arrives at Jake’s doorstep with a six-foot tall toothbrush and asks if he would like her to stay the night. He suggests that he would like her to stay forever and she agrees. Throw a dog and a ten-year-old street kid and the couple successfully navigate a life of purpose, passion and commitment. 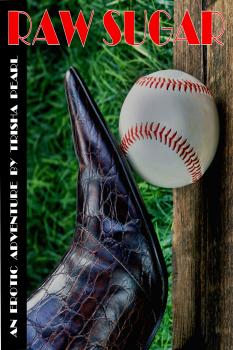 Sugar:
Central Park, playground to twelve million people. I had spent a long day watching children try to waste their lives and hoping I could change the unchangeable. So here I am watching a baseball game, one of many that take place on New York City weekends, trying to wind my brain down or to lift it back up, perhaps. The blue sky seems to have been painted by some omniscient artist, maybe one of the masters in the Met. The fresh cut grass makes my nostrils twitch, the green surface meticulously groomed. I envision an army of tiny people with scissors laboring over each blade of grass, perhaps a whole world of miniature humans snipping an errant leaf, prying out an incorrect weed. Sparsely filled bleachers house a raucous audience of, what I assume, are friends and family.
I suck on a sliver of hard candy and run my tongue over my bottom lip. A teenage boy glances at the stands and flatters me with a cat call. Say what you will about it being rude or incorrect, but there is something comforting in knowing that I can elicit such a reaction.
The players are mixed age boys and men, heavy on the teenagers. The next batter strolls forward to loosen his muscles. He’s older than the teens, lean, maybe a little too thin, although his body is well muscled. I notice his hands as he wraps them around the bat. They are large with long, graceful fingers. I picture him as a piano player, although I doubt he would risk those beautiful hands with a sport as rough as baseball. He stretches and tips his face to the sun. Striking, strong features make me wonder how many women, or men, or both, that face has seduced. As Mae West once said; “Love thy neighbor – and if he happens to be tall, debonair, and devastating, it will be easier.” I imagine most of his neighbors love this man.
The scoreboard shows a tie game, bottom of the ninth, a man on third, two outs. This batter will wrap it up or, if he strikes out, put it into extra innings.
He wiggles his butt and steps to the plate, grinning. He pats his chest and waves to the pitcher. His smile, as with most smiles, makes him even more appealing, bringing him closer to Miss West’s bar for devastating.
“Right here, put her right here,” he taunts the pitcher and pats his chest.
“Homer. Whack it high Mr. C,” one of the boys yells. There are some boos from a few of the older men among the spectators. The batter turns, bows, and doffs his hat to them.
The pitcher takes his time, kicking the mound, rubbing the ball against his uniform, just above his crotch. He adjusts himself in that area, slowly, provocatively. Finally, he does a down-right professional looking wind-up and the first pitch sizzles high across home plate.
The batter watches it disdainfully and takes a step back. He taps the bat against his shoes and does a sensual stretch over his head, with a hand on each end of the bat. He sways back and forth, arching his back, bringing the bat down slowly. I have never watched muscles loosened with so much sexuality.
“Ball one,” calls out the umpire. “You betcha!” yells the batter.
The second pitch whistles past; the batter swings late and misses.
“A swing and a miss,” one of the out-fielders shouts. The pitcher grins. He is enjoying watching this batter work at getting a hit. Friends, perhaps lovers, I think. Batter and pitcher, both seem to be using physicality to distract the opponent. My gaydar says lovers.
The pitcher winds up. The ball screams toward home plate. The pitcher has a good arm, but the batter has a good eye and the ball flies low and fast out into center field. He doesn’t need to run the bases to win the game. But winning is not his only agenda. At the crack of wood meeting leather the batter shoots forward with adrenaline fueled speed. The ball soars over center field but doesn’t make it over the wall. The runner screams toward first base, surging on to second as the outfielder scrambles after the flying sphere, overruns it, turns, snatches his quarry, bobbles it, drops it, and, finally, throws it in the direction of second base. The second baseman leaves his station to chase the ball as it dribbles by just out of reach. The third base runner saunters across home plate, winning the game. But the batter churns on to third. The second baseman grabs the ball and smacks it into the glove of his pitcher. The catcher takes a hurried step away from home plate as the batter rounds third and zings toward home. The pitcher flies off the mound to intercept him. A collision is inevitable.
The runner slides feet first, the pitcher dives, arms outstretched, grasping the ball to tag any body part he can find. By inches, the batter makes the safety of home plate.
Batter and pitcher stand up and whack the dust off their pants. Several teens come out to high five the batter. He obliges the young men, then grabs the pitcher around the waist. They do a tango out to the pitching mound where they are laughing so hard they bend over to catch their breath, finally walking off the mound, pushing and shoving each other all the way to the bench. Thinking my gaydar is correct, they are lovers, I mentally thank them for the show, climb down from the bleachers, refreshed, and head out to grab a cab home to get ready to meet tonight’s client.