Razor moved from the Memphis RTMC chapter to Chattanooga to set up and manage a series of laundromats, because the local chapter needs more ways to legitimize their illegal income. He’s gay, but the Chattanooga chapter has accepted gay couples into their social circle, so he hopes they can accept him.

Matty is about to graduate college, and he’s in the market for a Daddy. He walks into the RTMC bar with three of his girlfriends, and a huge hulk of a man rescues him from some rednecks. He recognizes the bouncer for the leather daddy he is, and sparks fly between them.

Most of the MC is prepared to accept Razor as a gay brother, but they know they’ll have to figure things out as they happen once Razor is serious about someone. Will his ‘boy’ be an ol’lady? And can all the ol’lady rules really apply to a man?

Razor is a raven, Matty is human. The RTMC fits into the local supernatural hierarchy in a myriad of ways, and Razor is already friends with Abbott and Spence.

But a supernatural storm is about to blindside the club, and their personal ties to The Dragon King and Master Vampire won’t be enough to help.

Warning: Male-male sexual practices are front and center in this book, not to mention it’s kinky as your grandmother’s old phone cord. Razor and Matty are heavy on the D/s, the S&M, and the B&D.

Since some reviewers have been surprised by this, it seems necessary to also warn that sometimes bikers solve problems with their fists, and there’s lots of sexy fun in the clubhouse with women who hang around because they want to be there, and who can leave anytime they want. 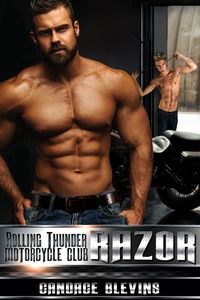 “Why aren’t you freaking out? You just found out werewolves and other shapeshifters are real. You’re too calm.”

“It wasn’t the time or place to freak out.”

He looked at me a few seconds and gave a tiny nod. “The little gay boy learned not to show pain when he wrecked — not if he wanted his pop’s approval.”

“That, and it kept the other racers from intentionally wrecking me as much. I fought back and was more aggressive than them if they went after me, so they stopped coming after me.” I shrugged and it hurt, but I ignored the pain. “And if one of them wrecked me, I never let them see me cry, no matter how bad it hurt.”

“And you found out about werewolves and raven shifters while you were dealing with the pain of a wreck.”

He lowered the toe of his boot and slid his foot out from under me. “At ease, but don’t rise.”

I sat back on my feet and brought my good hand around front. Daddy took his boots off, stood, and stripped with efficiency. I went hard watching him, though I could tell by his actions this wasn’t about sex.

“Stay where you are. Understood?”

I nodded, and he shrank down to the size of a large bird before I was ready to deal with it. I rose a few inches because my instinct was to run, but I quickly rested my weight back on my feet. My entire body had gone stiff as a statue, and I blew out a breath and forced my muscles to relax.

“Can you understand me?” I asked.

The magnificent, beautiful black bird nodded its head. His head. This was my daddy? Damn.

The raven hopped two steps closer to me, leaned forward, and slowly opened his wings. Standing, he’d been maybe two and a half feet tall, but his wingspan had to be close to five feet wide.

“That’s what you look like when you fly? Wow, you can understand me. What’s six times four?”

The bird folded his wings, tapped one foot twice and the other four times. Twenty-four. Fuck me.

“I don’t know what to do with this,” I told him. “I mean, it doesn’t change anything. Does it? You’re still my daddy, and it isn’t like you’re going to give me bird flu or anything. Right?”

The bird morphed back into Daddy, and he sat on the floor and laughed. “Bird flu? Really, Matty? That’s where you went with it?”

I shrugged my good shoulder. “It doesn’t change anything, does it?”

“No one I’ve ever dated has known what I am. None of my human friends ever knew. I’m not sure what to do with it either.”

We looked at each other a few seconds, and he said, “I can’t catch diseases, so condoms aren’t necessary unless I go in someone and then go in you. I can pass it on if it’s still on my dick, but once I take a shower and it’s gone, I can’t give you anything.”

“Okay, so that changes my rules about condoms if you play with someone else, but that’ll actually make things better. Right?”

“My sense of smell is better than yours but not even close to a wolf’s. However, my hearing is similar to theirs, and my eyesight is extraordinary. I can pick out patterns, and I see micro-expressions as if someone is shouting to me how they feel.”

“That’s how you know when I’m telling the truth?”

He nodded. “Most of the other shifters can smell a lie, or pain, or joy, or whatever. I see it. I see more contrast than you, and I can see magnetic fields. Mostly though, it’s that my brain recognizes patterns in everything. Especially when something breaks the pattern. Part of the reason I can fight so well in human form is because I pick up on the patterns of my opponent.”

“How much time do you spend as a bird?”

“Depends. I might go a few weeks without flying, and then might spend a few hours every day flying around and taking in my territory. Ravens aren’t indigenous to Tennessee, but most people can’t tell the difference between a raven and a crow, so it’s generally safe for me to be seen. I try not to land where a human can get a picture of me, but I’m not worried about them getting a picture or video of me flying.”

“So, wolves can’t just change and run around the city, but a rattlesnake can?”

“You’re really okay with this?”

“Honestly? I’m a little ticked you’ve kept something this big from me. When were you going to tell me?”

He didn’t say anything, and I suddenly understood. “You weren’t going to tell me!”

“I’ve never told anyone, Matty. With most of the ol’ladies in the club knowing, I’d have possibly told you eventually, but I hadn’t planned to do it anytime soon. Wolves tell their significant others, but ravens just don’t. My dad still doesn’t know my mom and I are birds, and they’ve been married fifty years.”

Daddy shook his head. “Maybe he should’ve, but he can’t find out now. The point is, I was raised to keep the secret. This feels wrong, and yet I like knowing you’ve accepted all of me. No human ever has. Or, none who loved me. I mean, Gen and Harmony accept me and they know what I am, but only because one of the stipulations of me coming to town was that I tell the human ol’ladies what I am.”

“So, no human has ever been given a chance to love all of you? Not even your dad?”

“There’s a ritual that has to happen. The wolves could do it, but I can’t, which might be one of the reasons ravens aren’t in the habit of telling people. Anyway, there’s someone in town I trust, and he’s kind of the top person to handle this.”

He’d avoided my question, but I let him. For now. “You aren’t making sense, Daddy. What has to happen?”

“Humans who know about supernaturals have to do this oath thing, so they can’t tell our secrets. I can’t let you out of my sight until it’s happened.”

“There’s someone who can erase your memory of ever being told in the first place.”

My stomach went into my throat and I thought I’d be sick. My memories are mine. No one can fuck with them. Ever.

But he’d considered it.

“You did the interrogation thing to make sure I’m okay with it. You’d have told them to erase my memories of the day if I’d freaked out.”

“Replaced and not erased, but yeah. It was an option.”

“Was, Matty. Once you’ve been bound to the promise, I’ll give everyone in the clubhouse the okay to be honest with you about what they are. Angelica gave me a lot of trust today by revealing herself when she wasn’t going to stay with you. If you were to tell someone before you could be bound to the promise, my life and Angelica’s life would be forfeit.”

Fuck. I didn’t want to do anything to put them at risk. “What do we need to do to make it legal?”

“Get dressed. I’ll text Abbott and see when he can meet us. It isn’t cold out — bring a shirt but don’t worry about putting it on. Jeans and sneakers should be fine, and if they aren’t then we’ll just put the shirt on over your arm a few minutes and take it right back off.”

“Abbott? As in Abbott and Spence? He’s the head guy for the oath thing?” Abbott’s nice enough, but he can be damned scary. I liked spending time with Spence though. 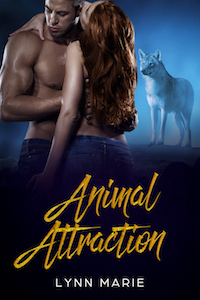 The Bear in Your Neighborhood (MM)
Alexia Ward
In Shelf
$3.50
Tweets by
sirenbookstrand